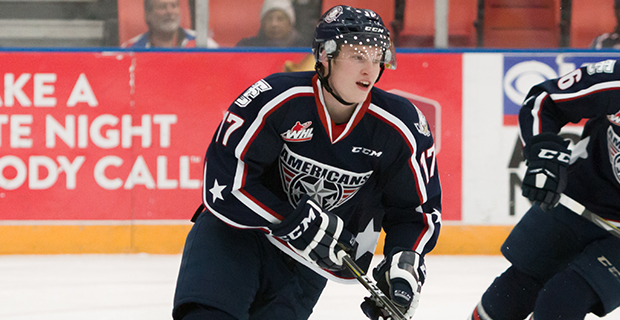 Carson Focht, C, Tri-City Americans, WHL
Height: 6’0”
Weight: 180 lbs.
Shoots: Left
Born: February 4, 2000 – Regina, Saskatchewan, Canada
Draft: 2015 WHL Bantam Draft - Round #1 (7th overall) by Tri-City Americans
Dynamic and intense in all areas of the ice. Tremendous work ethic and doesn’t take any shifts off. Strong on pucks and relentless puck pursuit puts pressure on defencemen. Creates opportunities out of nothing, is strong on the forecheck and often creates neutral zone turnovers. Effective penalty killer who will block shots and do anything to clear his zone. Likes to skate the puck in harm’s way, going to the greasy areas and usually ends up on his butt but has drawn a penalty. Tri-City has a deep squad at centre so Focht has seen some time on the wing and has seen ice time diminish deep into close games. His skating is good but needs to work on more explosiveness in his first step.

2016-17 Season: Focht was a victim numbers game but still saw time in 62 games potting 3 goals and 8 points. He also dressed in all four postseason games against Seattle registering one assist. He dressed for Team Canada White in WHC-17 scoring once and adding 2 assists in six games. 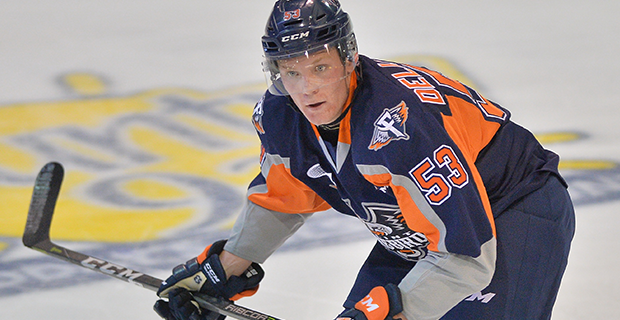 Ty Dellandrea, C, Flint Firebirds, OHL
Height: 6'1"
Weight: 185 lbs.
Shoots: Right
Born: July 21, 2000 – Toronto, Ontario, Canada
Draft: 2016 OHL Draft – Round #1 (5th overall) by Flint Firebirds
Has gained more physical strength over the summer and is off to a fast start this season. Is playing a leadership role as Assistant Captain in Flint. Has real smooth playmaking hands and combines that with a real smooth skating ability. Doesn't keep the puck on his stick too long and likes to play the give-and-go with short little touch passes. A rare centreman who loves to shoot the puck and likes to finish scoring chances he started. Good at keeping his stick on the ice and redirecting passes deep into the offensive zone and chasing it down. Good on face offs due to his quick hands and reflex ability. Does a good job separating himself away from the puck and playing the man away from the puck. Hangs out in neutral zone looking to create turnovers. Due for a big season but still needs to keep physical development going.

2016-17 Season: Dellandrea saw time on the Flint PP and PK and chipped in with 13 goals and 24 points in 57 games placing him in the top 20 in OHL rookie scoring. He also picked up an assist in 5 playoffs games against the Sault Ste. Marie Greyhounds and won more than half of his faceoffs but finished a minus 6. 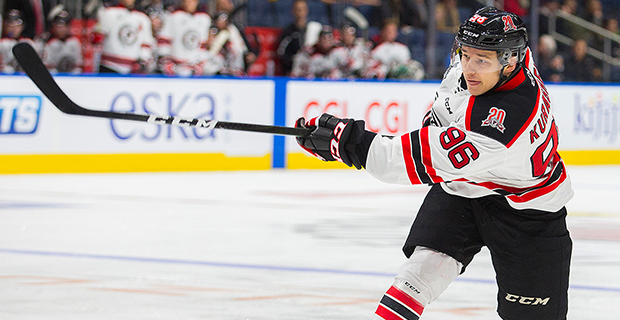 Philipp Kurashev, C, Quebec Remparts, QMJHL
Height: 5'11"
Weight: 180 lbs.
Shoots: Left
Born: October 12, 1999 –Munsingen, Switzerland
Draft: 2016 CHL Import Draft – Round #1 (21st overall) by Quebec Remparts
Excellent offensive instincts and is always ready to create offence from all areas in the offensive zone. Slick and creative puck handler who isn't the fastest skater but has good agility and a low centre of gravity to protect puck on the fly. Good vision through traffic and good anticipation and reaction to developing defensive coverage. Good playmaker who has soft hands and likes to send cross-ice passes to his wingers. Collects the puck very delicately and likes to keep his head up and look for the best play in front of him – whether it is skating with the puck or passing. Not a physical player at all and needs to work on his defensive zone coverage and faceoffs.

2016-17 Season: Enjoyed a good offensive rookie season in Quebec, scoring 21 goals and finished with 54 points which placed him in the top 5 in Rookie Scoring in the QMJHL. In five games at the World Junior A Challenge, he collected three goals and four points for Switzerland.