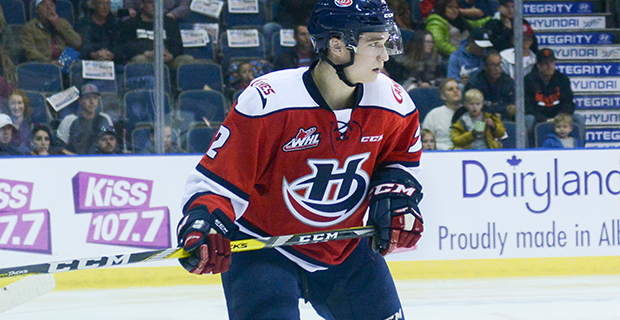 Calen Addison, D, Lethbridge Hurricanes, WHL
Height: 5’11”
Weight: 178 lbs.
Shoots: Right
Born:April 11, 2000 – Brandon, Manitoba, Canada
Draft: 2015 WHL Draft - Round #1 (2nd overall) by Lethbridge Hurricanes
Small in size but big at heart and work ethic. Good defensive defenceman and holds his line and defends well against the oncoming rush. Takes his time with the puck and evaluates all situations and almost always makes the right play. Likes to use the entire ice to his advantage and makes good outlet passes to the forwards on the fly. Efficient skater who is well balanced on his feet and makes good transitions from what looks like effortless skating to acceleration very quickly. Is always in good position defensively and will go into the corners and battle with much bigger guys. Plays the power play and is developing into a reliable offensive defenceman.

2016-17 Season: Addison finished second in WHL rookie scoring with 33 points including 9 goals in 63 games. He added 2 assists in 13 postseason games for the upstart Hurricanes. He also competed for Canada at the Under-17 World Hockey Challenge, posting 3 assists in 6 games. 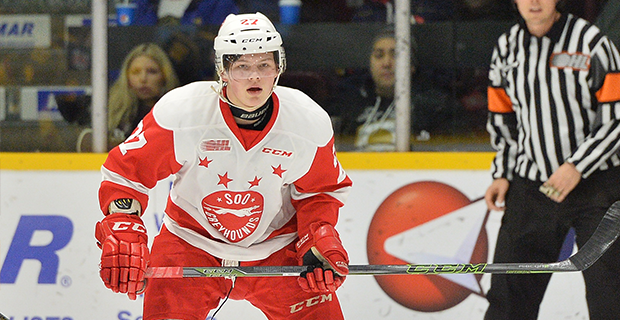 Barrett Hayton, C, Sault Ste. Marie Greyhounds, OHL
Height: 6'1"
Weight: 191 lbs.
Shoots: Left
Born: June 9, 2000 – Peterborough, Ontario, Canada
Draft: 2016 OHL Draft – Round #1 (9th overall) by Sault Ste. Marie Greyhounds
Slick centreman who mixes skill with size and plays an unselfish game. Not the quickest skater but efficient in all the right areas. Can pick up the tempo on the rush and create dangerous drives to the net. Aggressive in puck pursuits and thrives in the corner battles. Good forechecker who frustrates opposing defencemen, creating turnovers in the neutral zone. Tricky stickhandler who has a deceiving release and just when you think he is about to shoot, he will pass to an open teammate who has a wide lane to the net to shoot. Good hockey instincts in all areas of the ice and can play a physical game but rarely goes looking for it. Stays low in his own end that puts him in position to block shots and stay square to the puck. Due for a breakout season on a good team in the Soo.

2016-17 Season: Dressed in 63 games as a rookie, scoring 9 goals and 27 points. Only attempted 97 shots on goal but was key in the face-off circle winning more than half of them. Saw action in 9 playoff games posting 2 goals including one GWG in a 2 goal game against Owen Sound. He also recorded one goal and one assist in. Suited up for Team Canada (White) in 2016 Under-17 World Hockey Challenge. 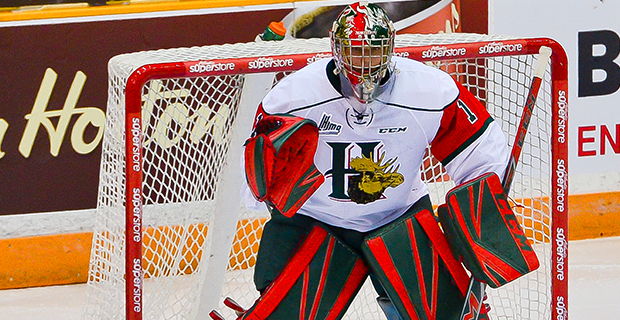 Alexis Gravel, G, Halifax Mooseheads, QMJHL
Height: 6'3"
Weight: 220 lbs.
Catches: Right
Born: March 21, 2000 – Asbestos, Quebec, Canada
Draft: 2016 QMJHL Draft – Round #2 (20th overall) by Halifax Mooseheads
Big, tall goaltender is currently splitting duties between the pipes with OA Blade Mann-Dixon but is making the most of his time by keeping his team in the game. Athletic, strong and mature with plenty of lower body strength to push off and move side to side. Very steady and quietly goes about the game. Keeps his glove up and squares his shoulders to take away angles. Catches with his right hand which is rare these days. Good reflexes to limit rebounds and hold onto the puck. When puck is loose in his crease, uses his big body to quickly lay on the puck rather than scramble. Good foot placement and looks like a natural goaltender with his upright stance and focus.