Austin Pratt, RW, Red Deer Rebels, WHL
Height: 6'3”
Weight: 205 lbs.
Shoots: Right
Born: July 30, 1999 – Lakeville, Minnesota, United States
Draft: 2014 WHL Draft – Round #4 (75th overall) by the Red Deer Rebels
A lot was expected out of the big bodied winger this season and some many say his play was less than where it needed to be. However, Pratt is a strong offensive checking style winger who loves to get in the way in front of the net. The power forward has improved his skating over last season and is effective on the offensive zone cycle and keeps his feet moving and is difficult to move off the puck. Has a quick release and likes to shoot in stride. Works really hard and will sacrifice himself, blocking shots and getting to dirty areas around the net. Is good on the forecheck and plays his angles well. Doesn't play any special teams and had trouble staying consistent throughout the season despite playing 70 games this season, scoring 16 goals and 34 points.

DID YOU KNOW? Pratt grew up in Iowa before moving to Minnesota to play his minor hockey. He played High School hockey in Minnesota before playing two seasons with Shattuck St. Mary's U16 Academy where he captured two National Titles. He scored 20 goals and 52 points prior to being drafted by Red Deer. 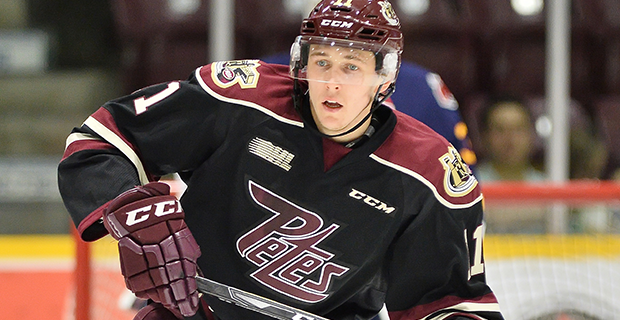 Zachary Gallant, C, Peterborough Petes, OHL
Height: 6’1”
Weight: 185 lbs.
Shoots: Left
Born: March 6, 1999 – Oakville, Ontario, Canada
Draft: 2015 OHL Draft – Round #1 (5th overall) by the Peterborough Petes
Gallant has done a real good job of flying under the radar this season and giving the Petes a solid form of secondary scoring. He has developed a strong scoring touch and is a good physical competitor in front of the net. Has good hands around the net and has good knowledge of when the right time to mix it up could be, giving his team an edge. He also likes to loiter between the hash marks and in the slot, waiting for the play to develop while keeping his feet moving. The puck is not on his stick too long as he likes to shoot with a fast, clean release. He doesn't have a strong first step but catches up to the play and gets involved. Makes smart decisions with the puck and stays engaged in the play and rarely gets caught flat-footed.

DID YOU KNOW? Despite playing 51 games in his rookie season in 2015-16, Gallant was held goalless and had four assists. Gallant rebounded well and scored 21 goals and 47 points this past season. He played in the 2014 Greater Toronto Hockey League Top Prospects Game while with the Mississauga Rebels. He was coached by his Father, Jamie through his Minor Midget years. 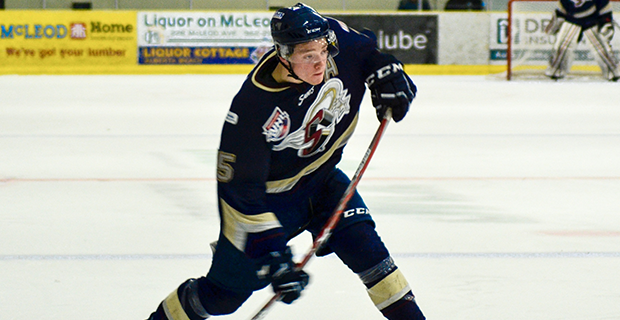 Ian Mitchell, D, Spruce Grove Saints, AJHL
Height: 5'10”
Weight: 165 lbs.
Shoots: Right
Born: January 18, 1999 – Calahoo, Alberta, Canada
NCAA Commitment: – Denver University (Div. 1) 2018-19
Mitchell is an offensive  defenceman who has done quite well in his Tier II career with Spruce Grove in the AJHL. He can quarterback the power play and distributes the puck well in the umbrella formation. Good passing defenceman but also likes to shoot and puts it on net consistently. Keeps shots low for deflections or can find a hole in the goaltender to put the puck past. Likes to play in all three zones and is quick to jump on loose pucks in the neutral zone and takes it deep in the offensive zone looking for scoring chances. Battles hard in his own end but tends to shy away from physical encounters with bigger opponents. Will play one more season of Junior Hockey before heading off to Denver University in the fall of 2018. Brandon Wheat Kings hold his WHL playing rights.

DID YOU KNOW? Mitchell joined Spruce Grove after playing in the St. Albert Midget AAA Raider program in 2014-15 where he posted one goal and 11 points in 27 games. He was a standout in his first full AJHL season in 2015-16 scoring 6 goals and 27 points in 54 games and received an invitation to play for Canada at the World Under 17 Junior A Challenge where he scored two goals and five points in six games. This past season, Mitchell improved his stats scoring eight goals and 37 points in 53 games.