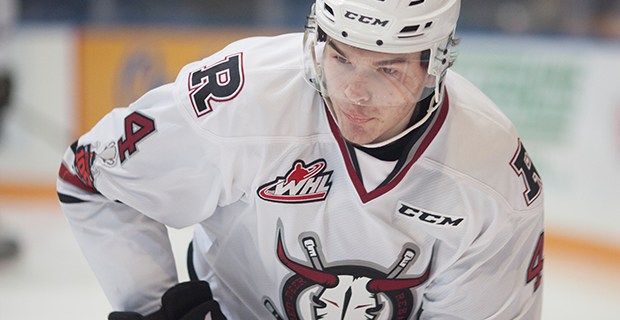 
Alexander Alexeyev, D, Red Deer Rebels, WHL
Height: 6’3”
Weight: 200 lbs.
Shoots: Right
Born: November 15, 1999 – St. Petersburg, Russia
Draft: 2016 CHL Import Draft - Round #1 (49th overall) by Red Deer Rebels
One of the first things noticeable with Alexeyev is how fluid his skating is for defenceman of his size. His big, long strides help him take up a lot of space on his defensive zone coverage and when he skates the puck up ice. Soft hands when making cross ice passes to defence partner or to streaking forward. Can put the pass right on the tape and likes to play the game at his own pace taking time to regroup in his own zone. Does well keeping his stick in passing lanes and good at breaking up odd-man rush. Good puck control especially when puck is bouncing or rolling. Would much rather pass the puck and move it up ice than skate it up. Needs to add physical part of his game.

2016-17 Season: Skated in 41 games for Red Deer before going down with a season ending knee injury in late January. He finished the season with four goals and 21 points. Before the season, he skated with Russia in the Ivan Hlinka tournament as an Assistant Captain. 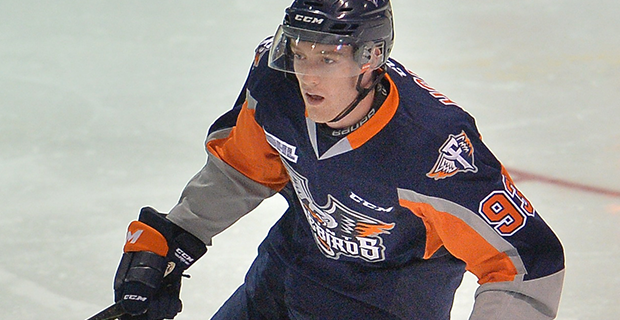 Hunter Holmes, C, Flint Firebirds, OHL
Height: 6'1"
Weight: 181 lbs.
Shoots: Left
Born: January 25, 2000 – St. David's, Ontario, Canada
Draft: 2016 OHL Draft – Round #2 (22nd overall) by Flint Firebirds
Has a good sense of direction of where he needs to take his game on a nightly basis and brings tremendous work ethic each shift. There are some nights where you wish he would get rewarded for his hard work both offensively and defensively. Holmes is a playmaking centre who would rather pass than shoot but when he takes a shot, he can shoot accurately. Has a ton of room for growth physically. Deceiving down low and able to find his linemates through the smallest holes and get the puck to them. Tall, lanky kid is not the strongest skater but works hard on the forecheck and back check. Needs to build strength in the face off circle and a kid his size. Lacks any physicality which would give him an edge in many aspects of the game including battles in the corners and separation from the defence.

2016-17 Season: Holmes missed only one game all season scoring five goals and adding eight assists. Took over 500 faceoffs wining just under 50% of them. Dressed in all five postseason games vs. Sault Ste. Marie, posting one assist. 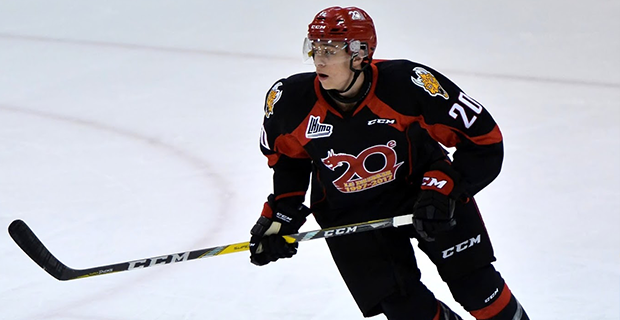 Xavier Bouchard, D, Baie-Comeau Drakkar, QMJHL
Height: 6'2"
Weight: 180 lbs.
Shoots: Right
Born: February 28, 2000 –Rouyn-Noranda, Quebec, Canada
Draft: 2016 QMJHL Draft – Round #1 (5th overall) by Baie-Comeau Drakkar
Standout defensive defenceman who prides himself on taking care of his own zone. Gives his goalies a clear view of the play by keeping the crease clear and clearing rebounds. Strong in the corners and battles hard to clear pucks out of his zone. Likes to send cross-ice passes and often right on the tape. Mature and has a High IQ who makes correct calls in all situations. Knows when to pinch in the offensive zone and leaves himself enough space and time to skate back into position. Plays both PP and PK and never wastes time getting rid of the puck. If he has a lane to shoot, he will get the puck to the net and won't waste a shot shooting in closed off lanes or into traffic. Earned Assistant Captaincy this season.

2016-17 Season: Enjoyed a good rookie season from the Baie-Comeau blue line, scoring four goals and adding 30 assists for 34 points in 63 games. Led all QMJHL rookie defencemen in points and was 14th overall in rookie scoring. Held off the scoresheet in a four-game sweep at the hands of Charlottetown in the first round of the playoffs. Dressed in all six games for Canada in the U-17 WHC.