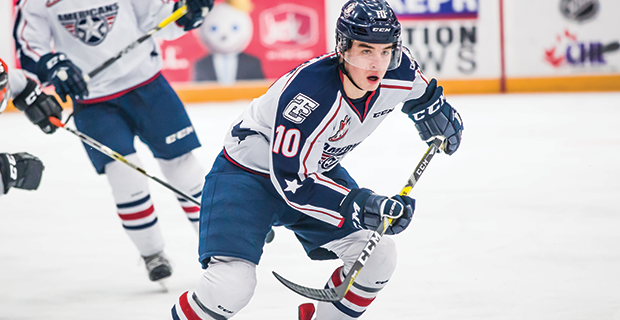 
Dylan Coghlan, D, Tri-City Americans, WHL
Height: 6’3”
Weight: 190 lbs.
Shoots: Right
Born: February 19, 1998 – Nanaimo, British Columbia, Canada
Draft: 2013 WHL Draft – Round #3 (63rd overall) by the Tri-City Americans
After going undrafted last year, Dylan Coghlan spent the entire season proving scouts wrong and putting himself right back in the draft picture with his play this past season. Stepping up his role with the team as a solid #3 defenceman behind Parker Wotherspoon and fellow draft eligible Jusso Valimaki, Coghlan plays a mature, quiet and patient game on the back end. He keeps his game simple and doesn't rush the play. Makes a good first pass right on the tape and is shooting much more this season, already surpassing last season’s goal and point totals while seeing a regular shift on the power play where he likes to shoot. He wins puck races, eludes the forecheck and anticipates well in his own end. A real fluid skater who is also a physical presence on the back end using his big frame to thwart the offensive attack. One of the most underrated defencemen for a second straight year.

DID YOU KNOW? After going undrafted, Coghlan attended the Detroit Red Wings prospects camp last summer. He is considered as one of as many as six Tri-City Americans who expect to be drafted this summer. 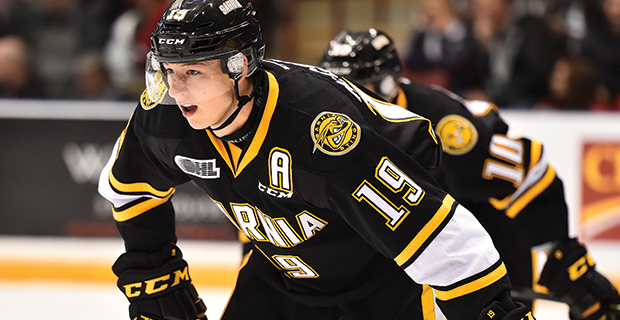 
Ryan McGregor, LW, Sarnia Sting, OHL
Height: 6’0”
Weight: 159 lbs.
Shoots: Left
Born: January 29, 1999 – Burlington, Ontario, Canada
Draft: 2015 OHL Draft – Round #2 (24th overall) by the Sarnia Sting
Undersized winger Ryan McGregor is an Assistant Captain with the Sting and has all the leadership skills to be a future captain for the Sting. Very smart decision maker who communicated well with his line mates. A speedy winger who shows tremendous speed off the rush and can be deceiving with the puck. His quickness is effective down the wing and at times can blow by any defenceman. A quick release and good hands in the slot. Will elect to stay out of the greasy areas and station himself out in the slot waiting to pounce on any loose pucks. Has put together a good skill set for success and will gain confidence as he gets stronger but will need to take his game up to another dimension to compete not only at the next level but in the OHL.

DID YOU KNOW? Sarnia selected McGregor with a second round pick in 2015 from the Burlington Eagles AAA minor midget club. He scored 17 goals and 37 points in 32 games during his draft year, while also adding two goals and five points with his private high school team, Oakville's Appleby College. He was named the Ontario Hockey League’s West Division scholastic player of the month for January, carrying an 82 per cent average in his Grade 12 courses. 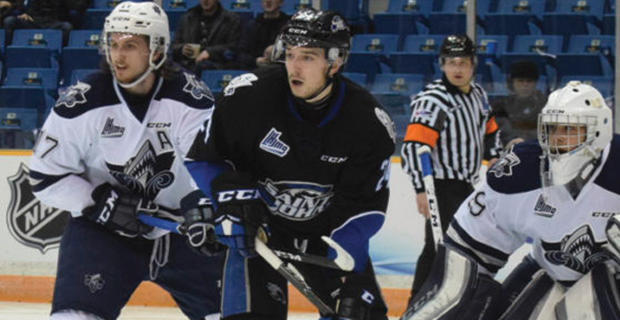 Cédric Paré, C, Saint John Sea Dogs, QMJHL
Height: 6’2”
Weight: 204 lbs.
Shoots: Left
Born: January 24, 1999 – Lévis, Quebec, Canada
Draft: 2015 QMJHL Draft – Round #1 (10th overall) by the Saint John Sea Dogs
A big-bodied centreman with skill, Cédric Paré will play in all situations and plays a solid 200-foot game covering all areas of the ice. Not afraid to go into the corners and crash and bang. Also, pretty tough customer in front of the net. Played in 64 games this season and scored five times including a game winning goal. It remains to be seen the impact he may have at the next level but his compete level is noticeable and well as his determination to jump on loose pucks. Skating is average for a big kid and his presence is always felt on the ice. Good mature level and understands the game.

DID YOU KNOW? Paré played with the Lévis Commandeurs of the Quebec Midget AAA Hockey League prior to joining  the Sea Dogs and registered 16 goals and 44 points in 43 games in his second season with the Commandeurs. He was an alternate captain with Lévis. He played five regular season games for Saint John in 2015-16, posting one assist before re-joining the club for the postseason run, dressing for three games.