Mom Mondays: The Right Time to Pull a Goalie? 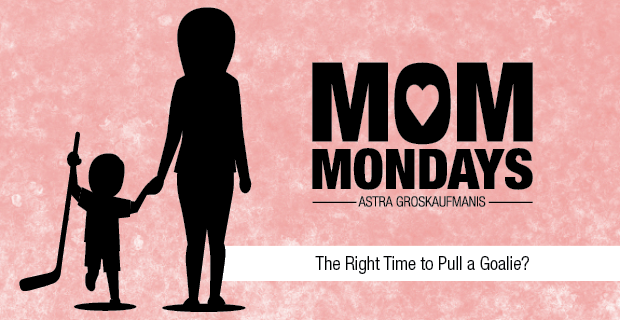 Did you know that at this very moment research being conducted on the optimal time to pull a goalie? Countless studies, analyses, and a whole lot of math devoted to the precise moment in a hockey game when it’s more advantageous to have an extra attacker on the ice than a net minder. I honestly have no idea if this is true, but when you think about all the sports page articles, the post-game coaches’ press conferences, the armchair hockey coaches, and the plain know-it-alls, you sure do have to think so.

I get it. There are critical games that a team has to win, otherwise the season or the tournament is over. If you ask a number of goalies, I’m pretty sure most of them will say, “Anything for the team” or “Anything for a win,” but honestly, I do think sometimes they're not as competitive as you think.

Now, I am no hockey coach, and I’m not a sports analyst, and I’m certainly not a goalie either, so I probably don’t know what I’m talking about. (So if you are a hockey coach, a sports analyst, or a goalie, you might want to stop reading this now.) But at one point in my hockey mom career, I was the mother of three minor league goalies. That makes me kind of a big deal. If you really want to know when the ideal time to pull a goalie is, maybe you should just ask me!

If your goalie is dancing around the crease and holding their private parts through three layers of goalie equipment, I bet they’re not trying to keep warm. I’m pretty sure they have to go to the bathroom. That’s when I might consider pulling them.

If your goalie appears to have lost any and all signs of concentration and is now singing Christmas carols between the pipes, that’s when I might consider pulling them.

If your goalie has been struck by a player or puck and you can hear them crying out in pain between two panes of glass and one bathroom stall door? That’s when I might consider pulling them too.

Has your teenage goalie been up until 3:00AM drinking with their teammates and clearly looks green around the gills even though the team colours are red and black? Yeah, that’s when I might consider pulling them.

When I hear parents and coaches in the foyer post-game bemoaning how we lost the game because they think the goalie should have been pulled ninety seconds sooner, I want to poke my eyes out with a hockey stick. Lighten up! I’m sure some readers will think I don’t know what I’m talking about. Maybe I don’t. But I do know goalies. And I sure do know how they feel when they’ve been pulled from a hockey game.

Has your goalie ever been pulled from a non-critical game? How did they feel about it?

Three cheers for goalies – and the goalie moms who love them!