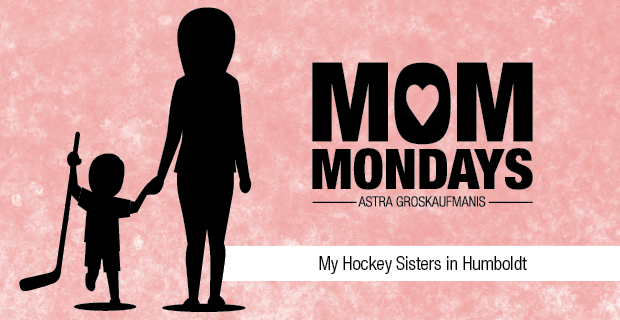 We’ve never met, but I am your sister. We don’t know each other, but we know everything about each other. Our paths have probably never even crossed, but we’ve travelled the same roads.

But right now, my hockey sisters, we are not the same. Right now, you’re hurting something fierce. You’re hurting beyond any hurt known to most hockey sisters. You now know agony no hockey mom wants ever to know. I’ve never felt the pain and sadness your hearts are feeling right now but wanted you to know that, even though we’ve never met, I am your sister. I can feel your hurt a thousand miles away. I’m sorry for your pain and I am heartbroken over your loss. Our sisterhood is crying.

I can’t be there to hug you, so I put on my hockey jersey and go to work. I can’t be there to wipe your tears, so I put out my hockey sticks outside our front door. I can’t come into your kitchen and cook up some supper, so I give a little money to the charities set up for you. I can’t bring your boys back, but I will look upon the faces of my boys, and I will weep for the faces of your boys. And then I will hug mine tightly, for I know you can no longer hug yours.

I pray that one day you’ll be able to walk into the same arena, sound that same cowbell, cheer that same cheer, beam again with that same pride, and do that thing that hockey moms do so well. Until then, I’ll do it for you.

Hockey moms of Humboldt, we don’t know each other, but you are my sisters.

Note
I am a humour writer, but I lost my funny last week. Everyone in the hockey community lost their funny last week. The tragic deaths of the members of the Humboldt Bronco hockey family, the suffering of those still in the hospital, and the pain of those dealing with this tragedy have taken their toll on our hockey community. There is strength and solidarity in our national past time’s community. We all feel it and we all hurt.