Mom Mondays: Gimme Back That Jersey! 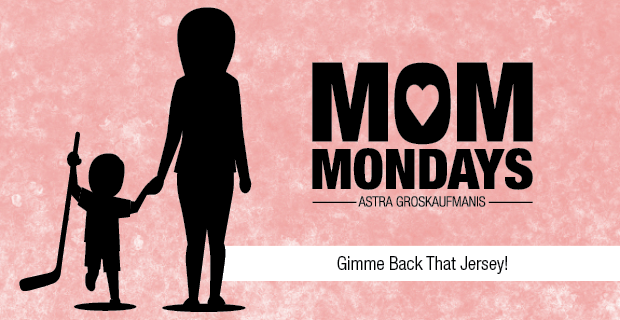 At the beginning of each hockey season, there is great fanfare surrounding the distribution of team jerseys. Even before they’re given out, the coach has already conferred with the players on jersey numbers, and careful deliberation has been given to sensible arguments like “But, it’s my lucky number!” or “I’ve never worn any other number!” and “Oh no, I can’t possibly wear that number!” Nevertheless, the excitement is obvious as the players walk into the change room and see all those jerseys hanging up in numbered order in poised anticipation of being donned for the first game of the year.

At the end of the hockey season, there is considerably less fanfare around the collection of team hockey jerseys. In fact, the fanfare has turned to complete apathy and evasion.

I am both a hockey mom and a team manager. Whereas the coach gets the thrilling and exciting task of handing out the jerseys, I as team manager get the painful and thankless (and don’t forget, smelly) job of collecting them at the end of the season. I am responsible to return these jerseys to the association washed, with name bars and sponsor bars removed, with no remaining threads, on wire hangers, with hooks facing the same direction, ordered numerically, all without an engineering degree.  My “Where is your jersey?” emails, texts, begging, and pleading and have been met with an assortment of excuses:

I already gave it to you.

I don’t know where it is.

Oh, I didn’t know you need them back by today!

I thought we get to keep them.

I’ll bring it to you next fall.

I need it for jersey day at school (the date of which invariably falls after jersey collection day).

I left it in the change room after our last game; I thought you picked it up.

I gave it to Billy (who claims they have not ever received it from anyone).

My Dad was supposed to give it to you.

I used it for road hockey and forgot it at my friend’s house.

No longer sympathetic to the above-mentioned questions and excuses, and knowing that I may not see some of these players at the year-end team party, I make a point of collecting the jerseys immediately after the final game of the season. You will find me in the dressing room, with seam ripper in hand, barring exit to the door with a pile of black jerseys on one side of me, and a pile of white jerseys on the other.  I will get these jerseys back to the association on time (and washed, with name bars and sponsor bars removed, with no remaining threads, on wire hangers, with hooks facing the same direction, and ordered numerically)! If possible without having been served a restraining order for harassment? All the better!

Do you have experience collecting team jerseys at the end of the season? What are your woes and what are your tricks? Please share!

Three cheers for hockey team jerseys – may they live long and be returned on time!