From the Press Box: Peak Time 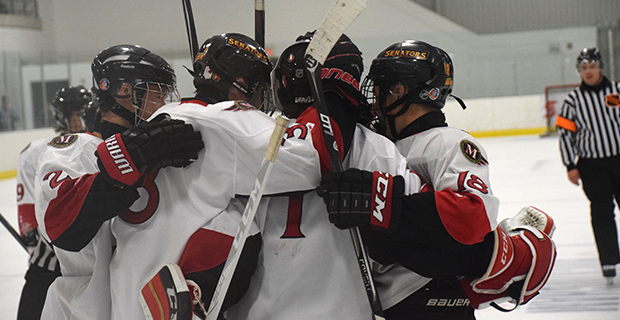 As we all know, March is huge in hockey and once again, there have been a ton of great stories coming out of the game this month.

We’ve seen champions crowned in university and female NCAA hockey, plus some stellar games and upsets in the final playoff and provincial rounds of minor and school leagues.

Both the CWHL and NWHL seasons were also capped off by upsets, with favourites unseated in both leagues.

On the CJHL side, the playoffs are well underway and have already claimed a few victims. And the postseason is finally sorted out for the OHL, Q and the Dub.

All in all, it’s been a great month.

As always, a huge highlight at the end of the season is the OHL Cup. We hope you’ve been following all our Cup coverage – make sure to read up on our website if you haven’t yet. What an incredible tournament it was this year. Of course, it’s always great to see a team come back and take advantage of a second chance. The Reps did not disappoint and no question that final marker will be talked about for a long time.

Second only to Dennis Golovatchev’s heroic game winner following Lucas Rowe’s perfect assist off the face-off is Marlies F Graeme Clarke’s lacrosse-style goal. Make sure to catch it online if you didn’t see it the first time around.

Clarke just happens to be one of the shortlisted candidates for HockeyNow’s Minor Hockey Player of the Year award so this wasn’t the first we saw of his physics-defying goal, and all-around skill to go with it, but it was great to see it displayed on a national stage.

On top of Clarke, we also got to watch nine other recent Ontario POY nominees show their stuff at the OHL Cup this year.

On the winning team, Jamieson Rees was a name we heard all tournament long and he nabbed a second place point finish to go along with the Cup.

Ryan Suzuki and Jeff Burridge both managed five points in six games for the tournament favourite London Knights, who had a great showing at the tournament until they were upset in the semis by the eventual champion Reps.

For their part, a strong Mississauga Rebels squad fell at the hands of the Vaughan Kings for a quarterfinal exit.

Anthony Aguanno led his team in points and fellow POY finalists Duncan Penman, Philip Tomasino and Michael Vukojevic gave the Rebels four straight wins, until they lost when it counted most.

Our final two nominees, Jack Hughes and Brandon Coe, also made an appearance at the OHL Cup. Hughes managed seven points in five games with the Marlies for a seventh place point leader spot and Coe was a key player for the Nats, who made it all the way to the championship final, only to be defeated in the last 12 seconds of play.

Rees and Aguanno were also both named to the Gatorade All-Star Team.

Obviously our POY committee has made some strong choices this year. It’s still early and we’ll definitely see some new names pop up in the coming months. Then we’ll be narrowing it all down as we get closer to July and our award presentation. You can find a lot more on these plus B.C. and Alberta shortlisted players in this issue and online.

Finally, this month was also marked by some pretty major news coming out of the U.S. women’s national team, who announced they would be boycotting the Women’s Worlds unless USA Hockey makes changes in how the team’s members are paid and treated. This story is still unfolding so we’ll see what ultimately transpires.

No question, it’s an exciting time to be part of women’s hockey and we’re seeing so much come out of the sport. Yes, there’s still a lot to be done but there are more opportunities and more support than ever before. For this month’s cover feature, we heard from Cassie Campbell-Pascall, Digit Murphy and some other hockey greats who are trailblazers in their field. Make sure to check it out and let us know what you think on our website or our Twitter and Facebook pages.

And if you’re not already one of our social media followers and newsletter subscribers, it’s a great time to sign up. We’ve been giving away weekly prizes for our subscribers since January and we’re coming up to our grand prize draw. It’s easy to sign up and you’ll get all the latest from HockeyNow delivered to your inbox every week.

As always, thanks for reading and see you at the rink.