From the Press box: On Olympics and Royals 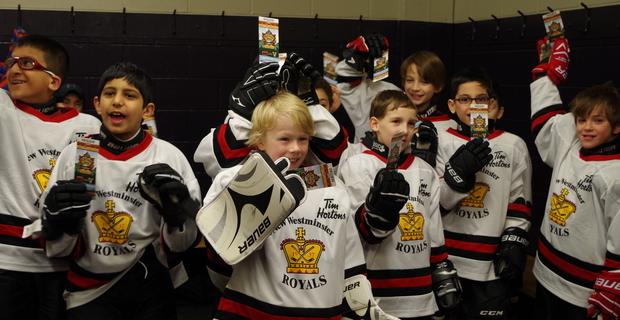 We are now officially in the best part of the season. Playoff races are fully in place in all Jr. A and Major Jr. leagues. Minor hockey playoffs are starting or on in most parts of Canada. Minor hockey provincials are less than a month away. All games matter now. It’s the best time of the year.

We were thrilled with the response and we had many very cool photos submitted. Below are some pics of the winning team, the New Westminster Royals H4C2 Tyke House team. We surprised the winners by presenting them their tickets in person before their game on Sunday, February 23rd and they were over the moon. Congratulations New West and thanks to all of our entrants.

Another set of games that really mattered were just completed — the 2014 Olympic men’s and women’s hockey tournaments.

I watched every Canadian game live from the men’s side. I caught bits and pieces of most of the women’s games, but we knew it was going to be the USA vs. Canada so it was tough to get excited until the Gold Medal game.

I was on a plane to Palm Springs the morning of the women’s Gold Medal game. It was perfect timing; my departure was scheduled for 8:45am Vancouver time, no problem, I could get on and get to cruising elevation in time for the 9:05am puck drop. We board and find out our plane is brand new and has no TVs installed. A plane full of Canadians on Gold Medal day and they gave us a no-TVs plane? Well, we landed and I decided to screw the data plan and turn on the Sochi App. 2-0 for USA with four minutes left. We all figured it was a done deal. I refreshed a minute later and hold on, 2-1 with the goalie pulled and about a minute and a half left. Now no one wanted to get off the plane. Refresh. Tied. Quickly get off the plane head for the the airport bar and stand by several dozen Canadians to watch the end. What a game!

Now it was the men’s turn.

It was funny how almost everyone was hand wringing the whole tournament because they looked at our roster and just expected us to roll over everyone. The top eight or so countries in the international play are really close. Canada might have a sexier looking roster, but what some teams like the Latvians give up in top end talent, they make up for in drive and knowledge of how to play on the big ice and how to defend and be opportunistic.

I personally picked Canada to win from the beginning. I know it’s easy to say that now and be a big shot after the fact, but I really liked the aura around the team right from selection day. They were calm, focused and driven. Every game the Canadians played the same way: good goaltending, great defence, good offence from the defence, excellent forechecking, short shifts and limited penalties. It really was incredible.

Every radio station and TV expert was all over the team — opinions on line shuffling, Crosby’s lack of production, who should play in goal, and so on — but they stayed the course.

This was the best I have ever seen a Canadian team play an international tournament at any level. Right from the Norway game to the final buzzer versus Sweden. It was absolutely outstanding. Every game mattered.

Get out there and enjoy games in your community over the next couple of months. The kids from five to twenty, from Hockey 1 to the CHL, will be playing games that matter.