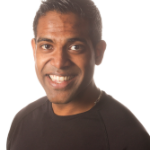 Born in Burnaby B.C., Joey J. Ali is the Founder of ProAli Goalie Training and co-owner of Pro-Formance Goalie Schools and iSOG. His insight on goaltending is brought forth from years of experience, including Junior B (PJHL), Junior A (AWHL) and College (NCAA and MCHA). He received his scholarship after winning a national title at the Junior A level. He’s also received student awards for academics while studying Business and Marketing and athletic awards for his play on the ice during his years at college. Joey is currently the goalie consultant to the Coquitlam Express (fourth season in the BCHL), Valley West Hawks MML, Costal Hockey Showcase and Lakeland Super Camps. As a result of his work in the industry using technology in his training programs, he has gained notoriety from Global TV News Hour, App Central (BNN and CTV), Breakfast TV (City TV), Hockey Tube.net and HockeyNow.