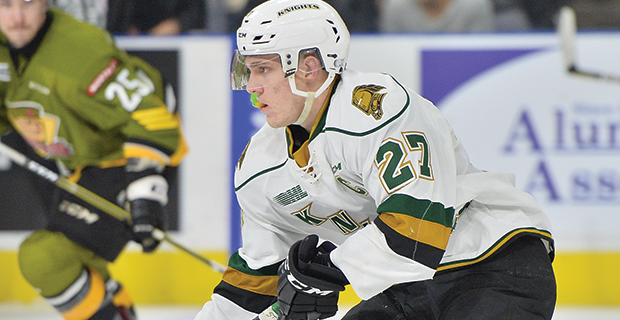 Robert Thomas is one of four OHL players who suited up in the World Junior Championships to be traded after the London Knights dealt him to the Hamilton Bulldogs. (Terry Wilson/OHL Images)

Even before the closing stretch before the OHL’s Jan. 10 trade deadline, the action has been fast and furious when it comes to contending teams picking up blockbuster talent.

All eyes have been on stars who played in the World Junior Championships and observers haven’t been disappointed with the movement.

On Saturday, the day the trade window reopened for players who competed in the World Juniors, the Soo pounced on the elite power forward, picking up him and Detroit Red Wings defensive prospect Jordan Sambrook from the Erie Otters.

The price tag in this exchange? Nine draft picks (five second rounders, two thirds and two sixths) and Hayden Fowler, the Soo’s first round pick in the 2017 draft.

While the Otters are clearly trying to recoup some of the assets they gave away last year in their OHL championship season, the Greyhounds are going for a championship themselves and you could have made a case for them being favourites even before the deal was complete.

They are just coming off a stretch of 23 straight wins after all.

The Kitchener Rangers have made an effort to stock up on World Junior talent and the same can be said out east with the Kingston Frontenacs and Hamilton Bulldogs.

Kitchener paid a premium for U.S. forward Logan Brown, sending their 2017 first round draft pick, Grayson Ladd and four picks (two seconds, a third and fifth) to the Windsor Spitfires for Brown and overage defenceman Austin McEneny on Sunday.

The Rangers have been quite active on the trade front dating back to the summer when they made another deal with Windsor, picking up towering defenceman Logan Stanley.

They followed in October by acquiring Kole Sherwood from the Flint Firebirds and made another splash on Sunday by plucking power forward Givani Smith from the Guelph Storm.

It’s been a busy trade season for the Bulldogs and Frontenacs, each trying to outbid the rest of the Eastern Conference to form what could be a team that could play in May.

Max Jones, a teammate of Brown’s on the U.S. World Junior squad, went from the London Knights to the Kingston Frontenacs in a deal that sent Sergey Popov, a second round pick in 2023 and third in 2021 the other way. That trade came three days after the same teams made a deal that sent playmaker Cliff Pu to Kingston.

To wrap up the World Juniors contingent switching teams within the OHL, Team Canada’s Robert Thomas was dealt by the Knights to the Bulldogs for Hamilton’s top 2017 pick, Connor McMichael, their 2021 second round pick and four conditional picks.

Hamilton and Kingston have made other major trades to improve their championship hopes.

In earlier trades this season, the Bulldogs picked up Nicholas Caamano and Ryan Moore from Flint and Riley Stillman from Oshawa, each time surrendering several high-end draft picks and/or young talent in the exchange.

On New Year’s Day, Kingston gave up its 2017 first round pick, Cody Morgan and an assortment of eight second or third round picks (three of them conditional) to acquire Sean Day and Gabriel Vilardi from Windsor.

It’s been a hectic lead up to this year’s deadline and it’s still not over. Activity on deadline day varies each year, but you can be sure that general managers aren’t done dealing yet.