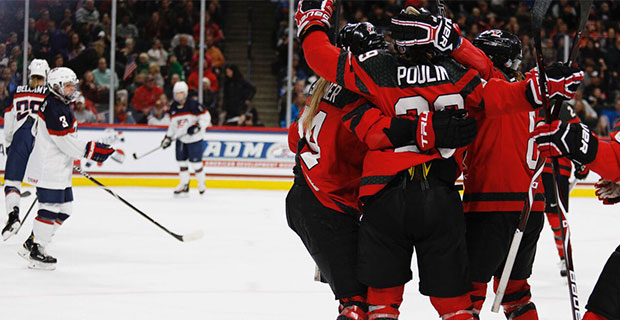 Team Canada celebrates their 2-1 overtime victory over the U.S. in Minnesota on Dec. 3. (Hockey Canada images)

Shannon Szabados stopped 27 shots and Brianne Jenner scored in overtime to give Canada a 2-1 win and the lead in the six-game series with the U.S. as they prepare for the 2018 Pyeongchang Olympics.

“I think it was huge for us especially coming after 4 Nations where we fell a little short. To be in Minnesota the state of hockey, on their turf it was pretty big win for us,” said forward Emily Clark (Saskatoon, Sask/University of Wisconsin, WCHA).

Canada stopped the U.S. on back-to-back power play opportunities in the first period as neither side got on the scoreboard.

The U.S. was the first to strike just over a minute into play in the second period when Megan Keller shot the puck glove side low after gathering a rebound on the power play to give them the 1-0 lead.

Canada’s captain Marie-Philip Poulin (Beauceville, Que./Montreal, CWHL) scored the equalizer with just over two minutes remaining. A long lead pass was re-directed by Poulin at centre ice to the stick of Meghan Agosta (Ruthven, Ont./Hockey Canada). She came charging into the offensive zone and and drove to the net, trying to pull the puck around the U.S netminder Maddie Rooney who made the save. Poulin, trailing the play, got a handle on the rebound to knock it into the net.

“I thought that we played pretty well, but I don’t think we played with enough speed,” said Robb Stauber, head coach of the U.S. Women’s National Team. “We did a good job of controlling the puck and getting some chances. We’ve got to turn around and do it again [on Tuesday].”

Not long until puck-drop in Minnesota! maple_leaf vs. us! pic.twitter.com/SZbjBNzJzr

Canada was beleaguered by penalties in the first two periods, just as they had in the opening two games of this series. They started both the second and third periods on the penalty kill. However, they took momentum in the third with three power play opportunities of their own.

“I think especially in the second half of the game, we forechecked really well, especially in the neutral zone we cut off their speed and took control in the (offensive)-zone and we weren’t scared to make mistakes,” said Canadian net minder Shannon Szabados (Edmonton, Atla./Hockey Canada). “I think that was the biggest thing. The girls looked like they were playing a little more free tonight.”

In overtime, Rebecca Johnston (Sudbury, Ont./Calgary, CWHL) fired a pass to Jenner at the top of the circles who then took a few steps in and wired a shot over the U.S. net minders blocker to secure the win.

“I think the third period was our best period. I think we put the pressure on them so it was nice to get rewarded for doing some good things,” said Jenner. “We believe in this group and we believe we can win any given night no matter our opponent so it was great to prove that to ourselves tonight.”

Sidney Morin has also been added to the residency program to be considered for a spot on the 2018 Olympic roster which will be announced on Jan. 1, 2018.

Morin helped lead the U.S. under 18 women’s national team to a silver medal at the 2013 IIHF Under-18 Women’s World Championship. She played 21 games for MODO Hockey of the Swedish Women’s Hockey League this season.