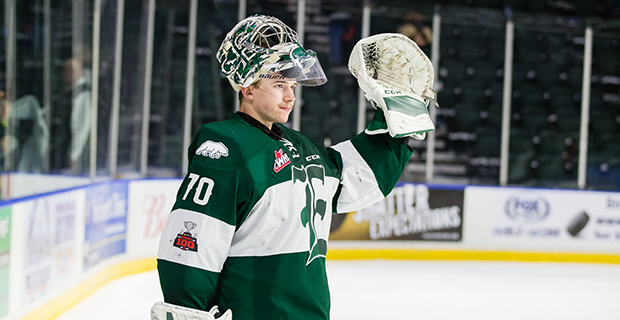 It’s been a year to remember in the Western Hockey League.

Over the past six weeks, three players and two coaches have etched their names into franchise and league history books with unbeatable contributions either on the ice, between the pipes or behind the bench.

The 64-year-old Kamloops product set a new record for WHL career coaching victories at 743 and counting with a 4-2 win over the Portland Winterhawks.

The victory pushed Hay past former Edmonton Oil Kings and Winterhawks head coach Ken Hodge’s mark of 742 — and he did it in 1,341 games, 70 fewer than Hodge.

Hay joined the Blazers as an assistant coach in the 1986-87 season before taking over as head coach in 1992-93 and staying there for three years before making a trip up to the NHL.

Hay spent the next nine years bouncing between the NHL, AHL and WHL — spending the 1996-97 season as head coach of the Phoenix Coyotes and most of 2000-01 as the bench boss of the Calgary Flames — before returning to the Dub for good.

After 10 years as the head coach of the Vancouver Giants, Hay returned to the Blazers in 2014 to surpass the WHL’s record for coaching wins in his hometown of Kamloops.

Hart ties Sexsmith’s shutout record
Carter Hart is 60 minutes away from completing another chapter in his storybook WHL career.

The Everett Silvertips netminder stopped 23 shots in a 5-0 victory over the Vancouver Giants on Feb. 10 for the 26th shutout of his career, tying Giants alumnus Tyson Sexsmith for the league record with plenty of time left to lock up No. 27.

Hart made his presence known as one of the league’s top tier goaltenders in the first game of his 16-year-old season. While it technically wasn’t the first game of his career, as the Sherwood Park product took in a pair of games as an affiliate the season before, Hart stopped 26 shots to lock up a fitting 1-0 win over the Seattle Thunderbirds on Sept. 20, 2014 to set the tone for his career.

The 19-year-old netminder went on to tie Sexsmith’s record in 178 games, one fewer than Sexsmith. In those 178 games, Hart has averaged an incredible .927 save percentage with a 2.03 goals against average.

Clouston passes Desjardins with 324th win
On Dec. 30, Medicine Hat Tigers head coach Shaun Clouston set a record that will take the better part of a decade to ever break again.

The 49-year-old bench boss collected his 324th victory behind the Tigers’ bench with a 4-3 overtime win over the Red Deer Rebels, passing former head coach Willie Desjardins in exactly as many games.

Clouston has brought the Tigers to the postseason for all but one of his seven complete seasons as head coach. While they did miss out in 2015-16, the Tigers still pushed their season past 72 games by forcing a tiebreaker against the Edmonton Oil Kings and falling 6-4.

Clouston joined the Tigers as an assistant coach under Desjardins in the 2003-04 season. The pair went on to win the Ed Chynoweth Cup in 2004 and 2007.

Clouston and the Tigers are poised to return to the playoffs again this year after holding the top of the Central Division since September.

Sitting one goal behind Evander Kane’s franchise-best 48 in a single season, the 20-year-old Burnaby product scored both of his team’s goals to steal a 2-1 overtime victory from the hands of the Seattle Thunderbirds and write his name into history.

Ronning went on to become the first player in Giants history to reach 50 goals in a season when he led his team to a 4-2 win over the Portland Winterhawks five days later to sit at 51.

Ronning joined up with the Giants in the 2013-14 season. While he went on to play in two postseason games that year and has yet to return, Vancouver sits poised to make their return to the playoffs and Ronning has been a big factor in their recent success.

With 51 goals on the year, Ronning has amassed a staggering 26.8 per cent of Vancouver’s 190 total goals on the season through 55 games.

Quenneville sets new bar for Tigers defencemen
David Quenneville has spent four seasons wreaking havoc from the blue line with the Medicine Hat Tigers, and on Feb. 9 he put himself into a class of his own by pushing his career point total to 197 with two assists in a 4-0 victory over the Calgary Hitmen.

The two-point night pushed Quenneville past Tigers alumnus Kris Russell for the 48-year-old franchise’s defensive scoring record in five fewer games than it took the now-Edmonton Oilers blueliner to do it in 2007.

Known for his blistering slapshot, Quenneville collected 65 goals and 132 assists through the first 236 games of his career, and he’s well on pace to leave the record far higher when all is said and done.