Which OHL Players Have Best Chances of Sticking in NHL this Year? 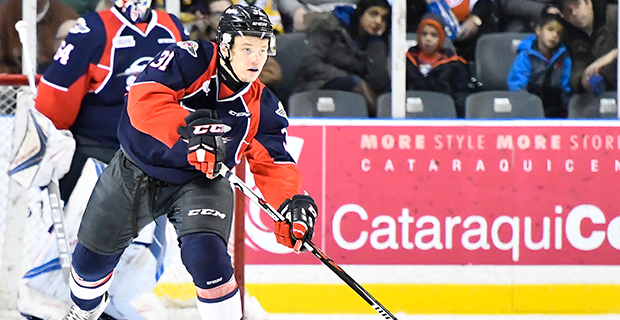 The OHL preseason is now in full swing and many of the top players in the league are off to their respective NHL rookie camps.

A successful run there will lead to a main camp invite, and perhaps beyond. It’s commonplace for highly regarded junior players, especially those drafted in the first two rounds, to earn a main camp spot and maybe even extend their stay into the first few weeks of the NHL regular season before they’re ultimately sent back.

While it’s still rare to see a player move on from the OHL before they turn 20, it’s not unheard of. Aaron Ekblad and Connor McDavid are the go-to examples as they were first overall picks and punched their one-way tickets to the NHL.

Aside from them, players like Sam Bennett, Jared McCann, Robby Fabbri, Mitch Marner, Travis Konecny and Lawson Crouse became NHL mainstays a year after they were drafted.

The talent pool appears thinner this year with few players expected to make the leap, but here’s a look at a few players out of the OHL who may have a chance if their performances from last season were any indication.

Mikhail Sergachev, Windsor Spitfires/Tampa Bay Lightning: He has developed into a premier two-way defenceman through two years in the OHL and could be considered for a spot on the Lightning this year.

The talented Russian started last season with the Montreal Canadiens before he was sent back to Windsor, where he was a key piece behind their Memorial Cup win. Shortly after, he was the

centrepiece behind the Montreal Canadiens’ efforts to acquire Jonathan Drouin from the Tampa Bay Lightning over the summer.

Taylor Raddysh, Erie Otters/Tampa Bay Lightning: After establishing himself as a dominant power forward with the OHL champion and Memorial Cup finalist Otters, Raddysh will look to show that he’s strong enough to stick with the Lightning.

His 109 points trailed only teammate Alex DeBrincat in the OHL scoring race and he starred for Team Canada at the World Junior Championships before putting up a six-point game during the Memorial Cup.

Olli Juolevi, London Knights/Vancouver Canucks: Like Sergachev, he was a top-10 pick (fifth overall) in the 2016 NHL Draft and has a strong chance of moving up to the NHL with the Canucks.

Granted, has had a terrible past two seasons, but Juolevi is a blue chip prospect and has been held in high regard by the Knights because of his strong skating and playmaking abilities.

From the middle of February onwards, McLeod took his game to another level and led the Steelheads in playoff scoring on their way to the OHL final. New Jersey has some holes to fill and the speedy forward can fill any role necessary, as he showed in limited action at the World Juniors.

His 94 points and 30-game point streak last year say a lot about how far he has come, but he has also continued to develop in the two-way facets of the game.

Over the summer, he was one of Canada’s top players during the World Junior Summer Showcase.

The Panthers lost a lot of talent from last year and currently have spots to fill, which could open the door for Tippett, the 10th overall pick in the 2017 NHL Draft.

While there are still areas of his game to work on, he possesses the size, speed and shot to contribute in the NHL sooner rather than later.