Where Are They Now: 2016 Player of the Year Owen Lalonde 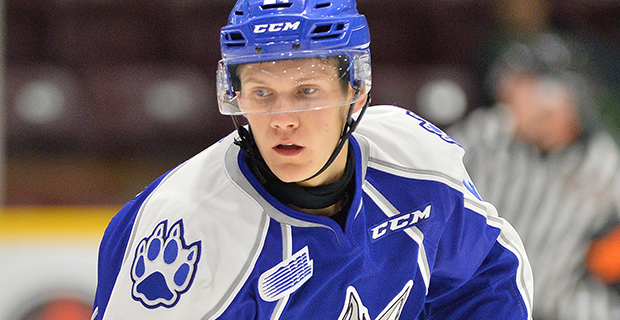 Owen Lalonde just capped off his first season in the OHL after the Sudbury Wolves added him to the roster out of camp. (Terry Wilson / OHL Images)

During his time playing with the Windsor Jr Spitfires, Owen Lalonde was named the HockeyNow Minor Hockey Player of the Year for Ontario.

Now, he’s spent a full season playing in the OHL completing his rookie year with the Sudbury Wolves and has found what the next level had in store for him.

Growing up playing in Windsor, Ontario, Lalonde turned out to be quite the formidable d-man. In his final season with the Jr Spitfires, he posted 37 points in 33 games and added nine points in 14 playoff games. His stellar performance led to Sudbury taking him with the second overall pick, where he made the team out of camp and played throughout the whole season including a playoff series.

At 6-foot-1 and nearly 180 pounds, Lalonde had the size to go along with the skill that allowed him to transition to the OHL. Apart from the pressure of his high selection, what was the most challenging part of playing major junior?

“There were a lot of new experiences,” Lalonde said. “The amount of travel, moving away from home, starting a new school, the speed of the game and strength of the players. I think the toughest thing was adapting physically and mentally to playing a 68-game schedule.”

Through Lalonde’s rookie season, he played 64 games and registered 12 points, got into all six of Sudbury’s playoff games and had one assist – now he’s looking forward for more next season. Lalonde is a two-way defenceman who models his game after Aaron Ekblad and is dedicated to putting in work to push to the next level.

“My favourite part of getting to this level is that hockey is now part of my daily schedule. I’m on the ice in one way or another every day and also getting the opportunity to play against tough competition every game,” Lalonde said.

It’s practically an immediate transition for Lalonde to move past his rookie season and start planning for the future, as he prepares for his draft year next season. Adding to the experience this year had to offer, Lalonde got to participate the World Under-17 Hockey Challenge, where he tallied a goal and an assist through six games.

Lalonde is looking forward to growing with Sudbury and getting more confident. He doesn’t believe he’s been able to show his offensive side fully yet. While he’s still getting used to the new school and life away from home, the experience gained from his rookie season has Lalonde looking forward to this offseason to improve.

“Getting to workout and skate with NHL and OHL guys in Windsor is really helping me learn,” Lalonde says.  “It’s showing me what is required to develop as much as possible. I want to feel comfortable and confident going into my second year in the league with my rookie season behind me.”

With HockeyNow announcing the 2017 minor hockey player of the year winners, Lalonde shared his insight for rookies who will be entering the league this year.

He says, like everyone else advises you, get into the best condition you can because you need to prepare yourself for the physical challenges the CHL will have in store for you. It’s a scenario that no matter how mentally prepared you are for it, it’s only once you hit the ice the you know how rigorous it can be.

“Be prepared to handle the ups and downs of your rookie season,” Lalonde said.

Sudbury acquired Kyle Rhodes in the offseason to help bolster the leadership on the blue line for the Wolves and Lalonde will look to gain as much as possible from the new lineup. With the team having such a young D core, Lalonde will be in a position to learn as well as add some leadership himself.

Gaining experience and looking ahead to his draft year, 2016 HockeyNow Ontario minor hockey player of the year Owen Lalonde has proven himself a worthy winner with more to come.