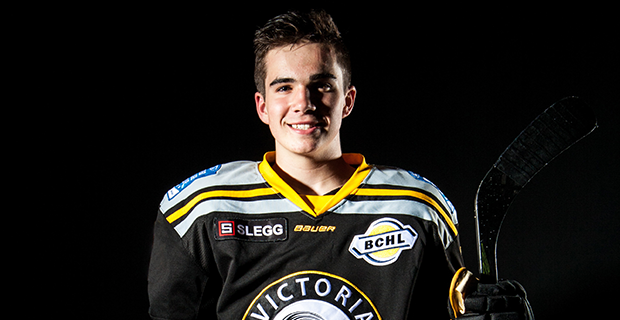 Alex Newhook from Newfoundland is in the midst of a dominant rookie season with the Victoria Grizzlies, looking like one of the BCHL’s next superstars. Although a broken hand will sideline him for the last month of the season, he should be back in time for playoffs. (Kyle Robinson Photography)

For Junior A options in Canada, Alex Newhook couldn’t have chosen a team much further from his home in St. John’s, N.L. than he did with Victoria.

The 17-year-old is in his first season with the Victoria Grizzlies in the British Columbia Hockey League (BCHL) and has been one of the league’s top players.

However, Newhook won’t be able to push for the scoring title as the forward broke his hand on Feb. 7 and likely won’t return until the first round of the playoffs.

Through 45 games, Newhook ranked second in league scoring with 65 points. His points-per-game were above those of Kale Howarth, a 20-year-old drafted by Columbus last year.

Newhook is the only player born in the new millennium that ranks among the top 25 scorers, ahead of a few prospects for this year’s NHL Draft.

By comparison, Kyle Turris, the highest NHL draftee in BCHL history who went seventh to Phoenix in 2007, scored 72 points in his 16/17-year-old year, good for a 1.26 points per game.

More recently, Tyson Jost, selected 10th by Colorado in 2016, had 45 points, just a shade under one point per game while skating with Penticton.

Newhook’s coach, Craig Didmon, said the team had high expectations for the rookie, but he has shot past them.

“About midseason, I spoke with him about the scoring title and how spending some time at Hockey Canada camps he might not have a chance at [it]” Didmon said. “He looked at me and I could tell he expected himself to be up there in scoring.”

Didmon says the hand injury will keep Newhook out two to four weeks, which could see him boost the Grizzlies for playoffs at the end of February.

“This year, I’m hoping for a big run with the Grizzlies in the playoffs and maybe reaching the RBC Cup,” Newhook said.

Earlier this year, Newhook was selected to attend the camp for Team Canada West ahead of the World Junior A Challenge. Newhook was one of six players born in 2001 to attend, but didn’t make the cut.

“I was disappointed, but I used it as motivation moving forward and proving I can be consistent and will hopefully be back there next year,” Newhook said.

He did get the chance to put on the maple leaf, playing for Canada Black at the World U-17 Hockey Challenge. Alongside other top ’01 skaters, Newhook recorded four points in five games.

STANDING OUT
It was clear from young age that Newhook was above his peers in Newfoundland. He was the Bantam AAA rookie of the year plus leading scorer, notching 11 more goals than the next closest player.

At the start of the 2015-16 season, Newhook headed west to Ontario to play at a higher level, joining with York Simcoe Express Bantam AAA in Newmarket, Ont.

The next year as the captain of the Midget AAA Express, Newhook led the league in scoring and was named the OMHA ETA (Eastern Triple A) player of the year.

He began looking for opportunities for his 16-year-old year, and with a family member in B.C.’s capital, it seemed like a good destination.

“His family contacted us as he was ready and looking to play Junior A Hockey as they don’t have a league in Newfoundland, and having an aunt in Victoria, they talked with her about him coming in and living in Victoria. They felt comfortable with him having a relative here,” Didmon said.

Didmon has coached in Victoria for more than 16 years and even had a young Jamie Benn on his roster for a few games. He said both players were clearly special.

“Seeing Alex dominating games – there’s been several times he’s skated through entire teams for goals and lifted the bench from their seats. He’s a very good player that doesn’t come around so often,” Didmon said.

FUTURE
Draft eligible next year, Newhook said the plan is to be back to Victoria. At the time of print, his team led the Island Division but were in a tight race with Powell River and Nanaimo hot on their tails.

He’s drawn interest from other junior leagues – last year he was drafted in the third round by the Halifax Mooseheads in the QMJHL and the second round by the USHL’s Lincoln Stars.

At the start of the 2019 season, Newhook said he’ll likely head back to the east coast to suit up for the Boston College Eagles, which will make it a little easier for his family to visit him.

“When I went down there it felt right. Their campus as one of my favourites, it was a great meeting and I’m really looking forward to playing there,” Newhook said.

It helps that Newhook’s younger sister, Abby, has committed to play at Boston College two years after her older brother.

Next season is still up in the air, despite the assurance from Newhook and Didmon that he’ll return to the Grizzlies.

Halifax will try to persuade Newhook to join them next season and they could get some help – the Mooseheads are a finalist to host the 2019 Mastercard Memorial Cup.

Having a Memorial Cup team much closer to home with a proven track record of prospect success may be tough to turn down for Newhook.

However, his mind is on the BCHL season at hand, and speaking of hands, as soon as his heals, he’ll be back on the ice terrorizing teams.

“He has incredible speed, can carry the puck, and see the ice really well. His speed and vision are his greatest asset,” Didmon said.

No matter his vision, Newhook can’t see into next year, but expect him to be a first round NHL Draft pick, whether he is on the east or west coast of Canada.