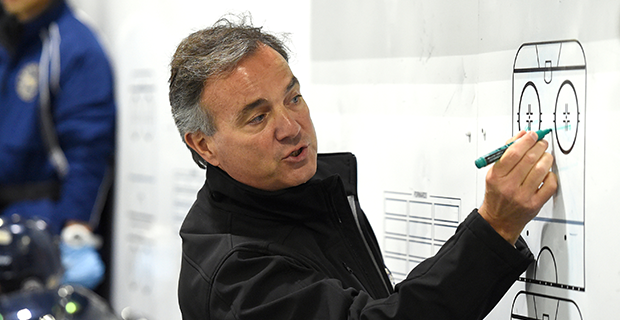 Mario Cicchillo is confident he can make a difference.

And that’s why the veteran junior hockey coach has agreed to try and turn around the fortunes of the Ontario Junior Hockey League’s Milton Icehawks.

“I’ve always been up for a challenge,” said Cicchillo, who will serve as the head coach and general manager of the Icehawks for the upcoming season. “We’ve got to change the culture here. It hasn’t been that great the last two years.”

For those who are not ardent OJHL followers, the situation in Milton has been rather abysmal lately.

Two years ago, the Icehawks managed to win just five of their 54 regular season contests. And for those who thought things couldn’t get worse last year, well, they did. Milton managed to register just four victories during the entire 2016-17 campaign.

Many are anticipating things should be better under Cicchillo, whose coaching résumé includes six seasons working in the Ontario Hockey League. He was an assistant coach for the then Mississauga IceDogs for four years. And he became the head coach of the franchise for two seasons when it relocated to St. Catharines and became known as the Niagara IceDogs.

Coaching the Milton franchise, however, will actually not be a new experience for Cicchillo. He was the Icehawks’ head coach during the 2006-07 season. He recalls the squad would attract more than 1,000 fans during its playoff contests.

“It’s a great town,” Cicchillo, a Toronto resident said of Milton. “I think it’s the fastest growing town in Ontario or possibly Canada.”

The Icehawks had 11 players eligible to return this season. But Cicchillo, looking to start with a relatively clean slate, said only four veterans are being invited to the club’s training camp, which opens Tuesday.

Cicchillo is not making any grand predictions for the coming season.

“Let’s just work to change the culture and work to make the playoffs,” he said.

Some uncertainly, however, remains with the organization. The Icehawks were sold during the off-season. The club’s new owner Darren DeBobbelaer was hoping to move the franchise to Brantford but did not receive approval to do so for this coming season.

Despite the club’s lack of recent success, there was no shortage of individuals who were hoping to suit up for the Icehawks. A total of 105 players attended Milton’s rookie camp this past spring.

But just 30 players will be at the squad’s main training camp this week.

Cicchillo is hoping to name the 23 players who will be on the club’s opening day regular season roster shortly after the Icehawks play their first pre-season match, this Saturday against the host Buffalo Jr. Sabres.