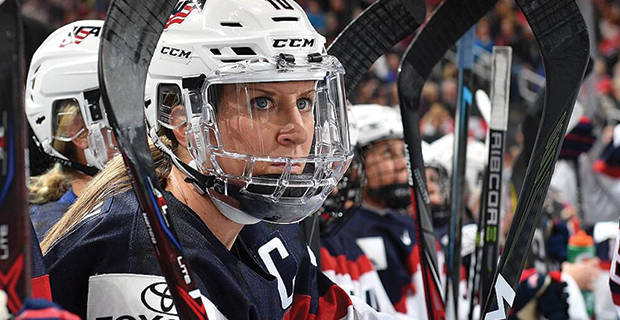 A core of veterans will lead the U.S. women’s national team at the PyeongChang 2018 Winter Olympics.

“The amount of skill and depth of talent on this roster is second-to-none and I couldn’t be more excited to see what these 23 women can do on the world stage in PyeongChang,” said head coach Robb Stauber, “With just a month to go until the Olympics, and now with our roster set, our focus only gets sharper. We’ll be ready to go.”

Stauber and four representatives of the team, including captain Meghan Duggan, alternate captains Kacey Bellamy, Brianna Decker and Kendall Coynewere in attendance for the live reveal of the roster in the second intermission of the 2018 Bridgestone NHL Winter Classic at Citi Field.

The roster also includes players who have had a well-decorated collegiate hockey background. Fourteen of the 23 players on the final roster have been recognized as top-10 finishers for the Patty Kazmaier Memorial Award, which annually recognizes the top NCAA Division 1 women’s college hockey player. Four have taken the trophy: Coyne, Amanda Kessel, Decker and Duggan.

“We’re excited. We’ve got the right group. We’ve been training really hard. Looking forward to getting over there,” said Duggan.

The U.S. will carry 13 forwards, seven defenceman and three goalies. Defenceman Monique Lamoureux was listed as a forward at the official announcement.

The 2018 Olympic Winter Games will take place Feb. 9-25 in PyeongChang, South Korea. The U.S. Olympic Women’s Ice Hockey Team will open the tournament on Feb. 11 when it faces Finland.

“Things look really good for our team. But, we caution our players day in, day out that it’s one game at a time. You don’t go to the Olympics and just get to the gold medal game. That would be a mistake on our part,” said Stauber.

The centralization process started with 23 players, the exact amount allowed to be carried to the Olympics. However, USA Hockey brought in 18-year-old Cayla Barnes in October and added forward Sidney Morin and defenceman Haley Skarupa in November. All three made the final cut. All three also have limited international experience. Barnes won three gold medals with the U18 team at the world championship but did not debut with the women’s national team until the 2017 Four Nations Cup. Morin also played with the national U18 team and most recently was playing professional hockey in Sweden. Skarupa has the most experience of the three — she has played in three world championships, three Four Nations Cup tournaments and has represented the U.S. in three U18 world championships.

In early December, it was announced Annie Pankowski was cut from the centralization roster. With the final roster announcement on Jan. 1, that leaves Alex Carpenter and Megan Bozek off the final roster.

“I might not agree with the decision made to exclude me from the team, but for the 23 payers that were named to the Olympics team, I only want to wish them the best to bring home the first gold since 1998,” said Bozek in a message she posted on social media.

Bozek was on the silver medal Olympic team in 2014 and has three gold world championship medals and a silver. She also earned the National Women’s Hockey League top defenceman award last season.

“It’s never easy to let veterans go. They’re just a big part of the program; but at the end of the day, we have to go to South Korea with what we feel most comfortable with and that’s a very difficult decision … And, on our end, we’ve just got to focus and make sure we get the best team there, like I said take it day by day,” said Stauber.