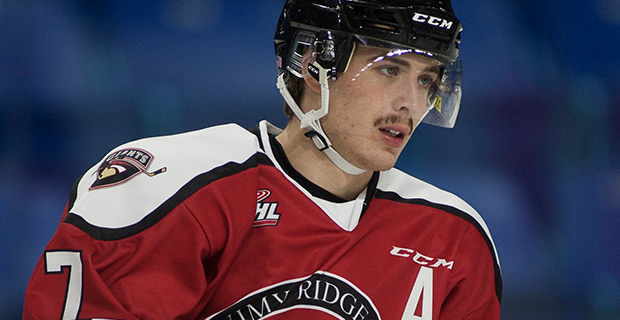 Vancouver, historically a staple in the WHL playoffs, has been out of contention for three straight years. Ty Ronning and the 2017-18 Giants are hoping to change all that. (Chris Relke/Vancouver Giants)

It’s been a long time coming for Ty Ronning.

The overage right winger has spent his entire Western Hockey League career with the Vancouver Giants, but it’s been four long years since he’s had a taste of the postseason. As far as Ronning is concerned, that all changes in March.

“We’re trying to push for playoffs and we haven’t done it in a while, since I was 16,” said Ronning. “Pushing for playoffs is what the fans deserve and what our ownership group deserves, and we’re going to be doing that.”

Ronning has more than 260 games of experience with the Giants under his belt, but he’s only taken to the ice for two postseason contests due to the fact that he was in his rookie year when Vancouver last made the playoffs.

A lot has changed in the four years since, from the framework of the team to Ronning’s cemented status as an elite scorer in the Dub. While he stands just 5-foot-9 and 179 pounds, what Ronning lacks in size he more than makes up for in speed and scoring touch — and he’s well on pace to shatter his career-best numbers from two years ago.

Through his first 46 games of this season, Ronning has tallied 42 goals and 17 assists to match his career-best point production of 59 points from 2015-16, with roughly two months left on the schedule. The pace of production has Ronning in a battle for the WHL’s goal scoring title, sitting second behind only Moose Jaw Warriors centre Jayden Halbgewachs — who recently reached the 50-goal plateau in just his 47th game — nearing the end of January.

But personal production isn’t Ronning’s top priority. The Giants having been playing their best hockey in nearly half a decade, sitting 25-14-4-2 through their first 45 games of the season for a plus-600 winning percentage. While Ronning’s offensive production has certainly been a factor in his team’s surge this season, he says it’s not his focus.

“They’ve been going in for me, which is awesome, but I’ve just been trying to contribute whether that’s getting in the shooting lane and blocking shots or shooting the puck and putting it in the net,” said Ronning. “It’s an all-around team effort. It’s playing with really good players.

I’ve been throwing the puck at the net, I’ve been trying to shoot the puck as much as I can and trying to make the best play possible.”

It’s already been a milestone year for seventh-round New York Rangers draft pick and son of NHL and Vancouver Canucks alumnus Cliff Ronning. He captained the Rangers rookie team at the 2017 Traverse City Prospects Tournament, is on pace to hit 50 goals for the first time in his career and has been a driving force behind the team’s potent power play.

The Giants’ man advantage has been clicking with a 22.9 per cent success rate this season — good enough for ninth in the WHL through mid-January — and Ronning is responsible for more than a quarter of his team’s 38 power play goals, finishing off 10 chances this season.

On top of his offensive output, Ronning has managed to clean up his two-way game as well. The product of Burnaby spent the first four seasons of his WHL career with minus ratings – fluctuating from minus-20 up to minus-8 – but he’s managed to stay out of the negatives without sacrificing his scoring prowess. The 20-year-old righty has pushed his plus-minus well into the positives at plus-18, all while producing at a career-high with an average of 1.28 points per game, and a staggering 237 shots on goal.

With 25 wins through their first 45 games, the Giants have already passed last season’s win plateau of 20 and are within striking distance of their first B.C. Division banner since the 2009-10 season.

The Burnaby Winter Club graduate says he has learned a lot in his lengthy WHL career — which will close out at nearly 300 games played — but if there’s one thing that remains crucially relevant entering his team’s first meaningful playoff push in years, it’s that no team is unbeatable.

“I’ve been with this team for five years,” said Ronning. “So with that experience and, I would say, knowledge in this, I kind of understand that any team can beat any team.”