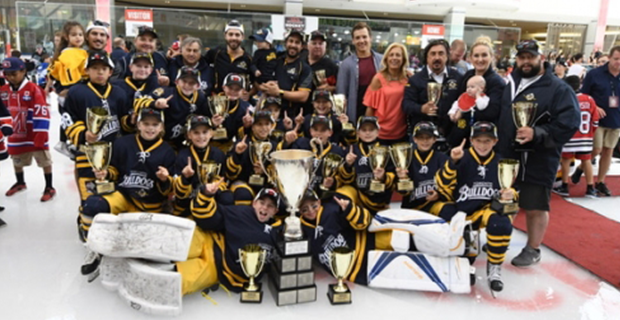 The Toronto Bulldogs went undefeated at the Brick Invitational Hockey Tournament and beat out fellow undefeated BC Junior Canucks in overtime to take home the coveted trophy. (Courtesy of Brick Hockey)

Many youngsters don’t have hockey on their mind during a hot weekend in July, but that’s not the case for some of the country’s top nine- and 10-year-olds, who just competed in the biggest tournament in their lives to date.

On the final Sunday, it came down to an overtime final between the Toronto Bulldogs and the BC Junior Canucks.

Both 7-0 and undefeated before the game, B.C. and Toronto brought lots of offence. The easterners started the game with a goal from Owen Griffin, then scored two more within 27 seconds of each other to take a 3-0 lead before the game was even 10 minutes old.

B.C. responded with two goals before Toronto got another, leaving the Bulldogs up 4-2 after the first period. The Junior Canucks’ Mason Gudridge bore down in net for the next two periods, holding Toronto to just one marker. B.C. scored another in the second and an early one in the third to tie the game at four.

With just over 12 minutes remaining, the Bulldogs’ Lev Katzin put Toronto ahead, but B.C. answered with 6:43 left in the game as Cameron Schmidt found twine. It was enough to push the game to an extra frame.

Just 33 seconds into overtime, Griffin notched his second of the contest to set off a frenzy on the ice as the Bulldogs piled off the bench to celebrate the championship with a 6-5 win.

It was the seventh championship for the Bulldogs in the 15 years they have been in the tournament, having last won in 2015. The Junior Canucks, last year’s champions, were looking for their second trophy.

Dave D’Ammizio, head coach of the Bulldogs, was proud of the work the kids put in all summer. The team was finalized in April, and after practices and a few spring and summer tournaments, the Bulldogs were ready to travel to Edmonton.

“The kids had a great week, they had a great round robin, exceptional team play, and scoring 30 seconds into the overtime by one of our defenceman was amazing,” D’Ammizio said. “It was satisfaction all around, something they worked towards throughout the summer.”

For the Junior Canucks, it was a tough loss, especially since it’s likely the only chance any of these kids will get to play on such at such a large tournament, according to team director Jon Calvano.

“Obviously this is a big stage for these kids and with all the fans in the mall and so close made the experience great. [They were] disappointed as for the boys this one a once in a lifetime opportunity,” Calvano said.

“For the players to self evaluate themselves in where they need to improve their hockey skills to continue to grow as a player [is huge],” he said.

In the semifinals, Toronto beat Team Minnesota 5-2 behind four points from Ryan Roobroeck and three from Lev Katzin. On the other side, B.C. snuck out a 1-0 win against Toronto Pro Hockey to stay perfect and jump to the finals.

The Bulldogs’ Michael Misa had a sensational weekend, scoring eight goals and 22 points in eight games to lead all scorers. His teammate Roobroeck had seven goals and 17 points for second.

Started back in 1990, the Brick Invitational has seen some tremendous players including Jordan Eberle, Dougie Hamilton, Andrew Ladd, Ryan Nugent-Hopkins and Dion Phaneuf.

“A lot of kids that have played in this and gone into the NHL likely remember it for their lives, it’s such an amazing experience. They’re treated like little NHL players and the Brick does a great job spoiling the kids,” Bulldogs’ coach D’Ammizio said.

He also noted the high skill level of players just nine or 10 can’t be compared to anywhere.

“It’s a collection of the top 10-year-olds across North America, each team has exceptional players. The hockey and skills displayed are phenomenal to watch and the kids are only going to get better,” D’Ammizio said.

Following the tournament, all players meet and exchange jerseys as keepsakes from their time playing in Edmonton.