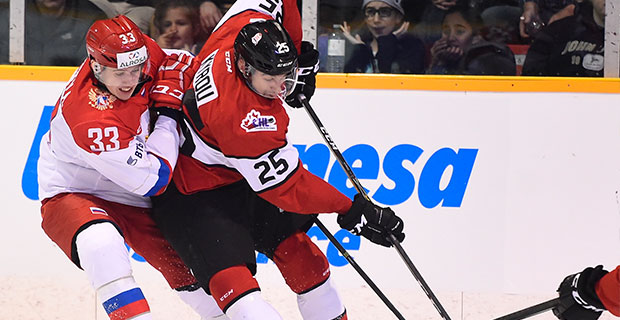 Jordan Kyrou has garnered a lot of scouts’ attention during a strong few seasons with the Sarnia Sting. (Aaron Bell/OHL Images)

We’re halfway through the Canada Russia Series, and like this point last year, the Russians are one win ahead after completing the WHL portion and half of the OHL loop.

Historically, the series has favoured the Canadians as they’ve only lost three times (the last time being in 2014) since the event’s inception in 2003.

More important than bragging rights, the series is the last tune-up for Canadians looking to earn an invite to Hockey Canada’s final selection camp in December.

There are many incumbents who will get another shot at World Junior gold, but let’s take a look at some of the new prospects who we’ve seen in action so far and could see in red and white around the new year.

Cole Lind (Kelowna Rockets/Vancouver Canucks): After just missing out on being picked in the first round of the 2017 NHL Draft, Lind is off to an excellent start this year with the Rockets.

He was among the WHL’s best players in their two games against Russia and displayed a very deceptive release en route to a pair of goals and an assist to open the series.

Jordan Kyrou (Sarnia Sting/St. Louis Blues): Kyrou made a great first impression during the World Junior Summer Showcase and must be in strong consideration for Team Canada.

He has speed to burn that has allowed him to jump out to the OHL scoring lead with 42 points. Those wheels should serve him well on the international stage.

Sam Steel (Regina Pats/Anaheim Ducks): Like Kyrou, his body of work before the series should make him a top contender for a Team Canada roster spot.

With 131 points, he led the WHL in points last year and showcased his playmaking ability with four assists through the WHL’s games in the series.

Owen Tippett (Mississauga Steelheads/Florida Panthers): May be as pure of a goal scorer as you’re going to find among Canadian players.

He started the season with the Panthers and scored his first career goal before getting sent back to the OHL for a chance at the World Juniors and more development. Picked up an assist in the OHL’s 5-2 loss to Russia Thursday in Owen Sound.

He shows offensive tendencies too as a solid passer who put up 51 assists last season leading up to the NHL Draft.

His massive frame gives him a long reach and he’s been known to play with a mean streak. He’s contributing at a better pace offensively this year and it helps that he’s coming off a Memorial Cup run last year with Windsor.