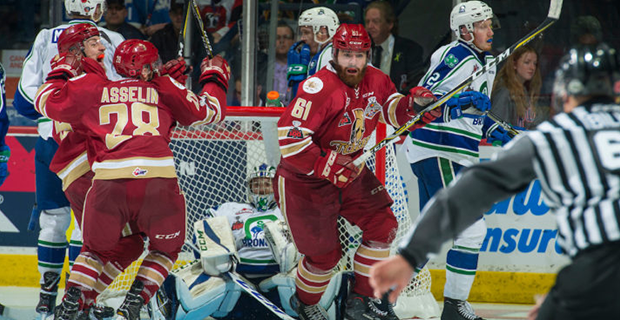 The Titan scored two shorthanded goals and one overtime marker to earn the W in their first game at the 2018 MasterCard Memorial Cup. (Marissa Baecker/Shoot the Breeze)

It didn’t take long for the Acadie-Bathurst Titan to show that they belong at this spring’s MasterCard Memorial Cup.

Entering the 100th edition of the tournament as one of the two smallest markets in the Canadian Hockey League, the Titan came up with an effort that befits their name.

Acadie-Bathurst showed their resiliency and determination on Day 2 as they edged the WHL champion Swift Current Broncos (the other small market franchise) 4-3 in overtime to give the franchise their first ever win at the MasterCard Memorial Cup.

Liam Murphy was the hero for the Titan when he scored at 2:58 of the first overtime period after using his height and large frame to set up shop in front of Broncos goalie, Stuart Skinner before swiping home a loose puck.

“I was battling in front of the net saw the puck come to my stick and banged it in,” explained Murphy.

“It’s a huge win for us because it guarantees a spot in the tie-breaker. We had to fight back with two shorthanded goals but we got it done and pulled out the victory.”

Those two shorthanded markers Murphy was talking about enabled the Titan to remain in the game and force extra time.

After taking a 1-0 lead on a goal by Samuel Asselin at 8:02 of the opening frame, Acadie-Bathurst saw their lead disappear before the end of the period when Tyler Steenbergen and Giorgio Estaphan found the back of the net for Swift Current to enable the Broncos to jump ahead 2-1.

The Titan took an early second period penalty but that’s when their vaunted PK unit went to work reversing the tables on the WHL champs as Asselin notched his second of the contest to tie things up 2-2.

Estaphan potted his second of the game to put Swift Current up by one again 3-2, but you guessed it, the Titan roared back with another shortie, this time off the stick of Adam Holwell with the only scoring play of the third period to set up the tournament’s first overtime session.

This one didn’t take long to determine with Murphy’s early game winner less than three minutes in.

“Those two penalty kill goals were clearly the difference for us winning that game,” said Titan head coach, Mario Pouliot.

“We scored a couple [shorthanded goals] during the playoffs and we used it to our advantage against Swift Current. We have a lot of speed on our on PK units and the coaches encourage the players to go for the net when there’s a scoring opportunity.”

Evan Fitzpatrick gave up 3 goals between the Titan pipes.