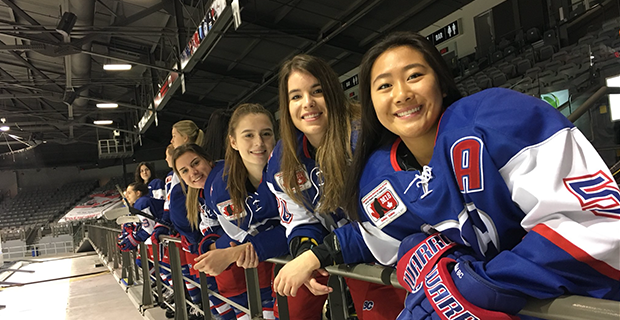 Team B.C. captured bronze at last year’s U18 Women’s National Championship and they are back for more. (Courtesy of B.C. Hockey)

Eight teams skated out on to the Pavilion ice in Quebec City yesterday with one goal in mind, winning the National Women’s Under-18 Championship.

Here is the break down team-by-team of players to watch for and a look back at their previous history at this tournament.

ONTARIO RED
Back to back to back to back. If Ontario Red can accomplish winning the gold medal again this year they will continue their domination at the nationals, holding on to that crown for 11 of the 12 years in the tournament’s history.

With Madelyn McArthur (St. Catharines, Ont./Oakville, PWHL) between the pipes, the idea of a four-peat isn’t too far-fetched. She recently committed to Boston College and was impressive in the U.S./Canada U18 series in the summer. She also went undefeated last season with her club team, earning seven shutouts.

Up front, watch for big things from forward Rebecca Vanstone (Mississauga, Ont./Mississauga, PWHL) who leads the PWHL in scoring so far this season with seven goals, nine assists and 16 points. This squad also has strong leadership in Brooke McQuigge (Bowmanville, Ont./Whitby, PWHL), who was the captain of the U18 team in the summer series and on Ontario Blue last year. They also have Canada’s U18 alternate captain Sarah Fillier (Georgetown, Ont./Oakville, PWHL).

QUEBEC
Ontario Red defeated Quebec 4-1 in the gold medal game and it is something Audrey-Anne Veillette no doubt still has stuck in her mind.

Quebec had more than ample chance to attack, with Ontario Red called on seven straight penalties in the second period, but Quebec’s offence that seemed unstoppable for most of the tournament was shut down.

While they had excellent goaltending in Édith D’Astous-Moreau last time around, they will rely on Geneviève Lamoureux (Quebec, Que./Capitale-Nationale, QCMAA) and Michelle Thibault (Sherbrooke,Que./Saint-Laurent,CEGEP). On defence watch for Guay to step up to make plays in the offensive zone while delivering a heavy shot from the point.

Quebec has settled for silver seven times in this tournament.

BRITISH COLUMBIA
With a 5-3 win over Ontario Blue, B.C. brought the bronze medal back to the West Coast  last year— just the second time they have won a medal in the tournament’s history (bronze 2005).

The 2016 squad was led by Amy Potomak, who is currently centralized with Canada’s national team as they prepare for the Olympics. However, they have a slough of returning players including both netminders Kendra Woodland (Kamloops, B.C./Thompson, OMAHA) and Kate Stuart (Chilliwack, B.C./Leaside, PWHL).

Vorster was one of four players from last year’s team that cracked Canada’s World Championship U18 team. The solid two-way defenceman will have to step up and lead the defensive core for B.C.

Newcomer Reece Hunt (Nelson, B.C./Okanagan Hockey Academy, CSSHL) has already jumped up as a leader on the scoreboard, notching a goal and an assist in B.C.’s first game against Saskatchewan

ONTARIO BLUE
The only other team to win gold at the national tournament, Ontario Blue, just as their Red counterparts, have a ton of talent.

Alexa Hoskin (Belleville, Ont./Kingston, PWHL) has had a tremendous start to her season with 14 points (seven goals, seven assists), good enough for third overall in the scoring race. A good all-around athlete she is known for her speed.

Julia Gosling (London, Ont./London, PWHL), a St. Lawrence University commit, is another to watch for on this squad. The power forward was part of the U18 squad that was in the summer series against the U.S.

Both opened the tournament this year with a goal each in the preliminary round win over Alberta 4-0.

Thank you @HockeyCanada for the unforgettable experience and for making my dreams come true! pic.twitter.com/ST8LY1tHqK

ALBERTA
It should be tough for competitors to get pucks into Team Alberta’s net with goalie Camryn Drever in the way.

Drever (Edmonton, Alta./St. Alberta, AFHL) helped the St. Albert Slash (Pacific representatives) win the 2017 Esso Cup Championship with a perfect record. In fact, she recorded four shutouts in five starts — that includes the final where she didn’t allow anything past her.

Dara Greig (Lethbridge, Alta./Pursuit of Excellence, CSSHL), a University of Wisconsin commit, also played on the U18 national team in the summer series. She is known as a player with an excellent shot, a strong skater and an excellent playmaker.

Alberta had an unfortunate start to the tournament, losing 4-0 to Ontario Blue, but expect them to bounce back quickly.

SASKATCHEWAN
Sophie Shirley will no doubt make her mark in Quebec City.

The highly skilled forward is always an offensive threat when she puts her skates on the ice. She produced three points in four games at the 2016 nationals.

Despite stopping 32 of 34 shots in the tournament opener, Saskatchewan fell short against B.C., losing 2-0, and will hope for a better outcome against another strong contender in Team Quebec on Day 2.

MANITOBA
Captain Ashley McFadden had a goal and two assists in last year’s edition of the nationals.

“Being named captain of Team MB is a huge honour … I am proud to have a great group of leaders alongside me. I believe I speak for the entire team when I saw we are very excited to get things underway in Quebec City,” said McFadden.

Manitoba had a strong start for their first game taking Quebec into the third period tied 1-1. Olivia Cvar (Gimli, Man./Balmoral Hall, JWHL) scored the tying goal in the second period. Quebec found the back of the net two more times in the third to secure the 3-1 win, however, Manitoba goalie Halle Oswald (Sanford, Man./Pembina Valley, MFMHL) stood on her head turning aside 26 shots.

ATLANTIC
This squad struggled to put points on the board at last year’s tournament, however they have three returnees that should help.

Maggie Connors (St. John’s, N.L./Shattuck St. Mary’s, USHS) scored one of three goals that were tallied over the course of three games last year and she boasts elusive speed, is a great playmaker and has high hockey IQ. Also returning this year are Josie Chisholm and Talli Warren, both are able to make great plays on either end of the ice.