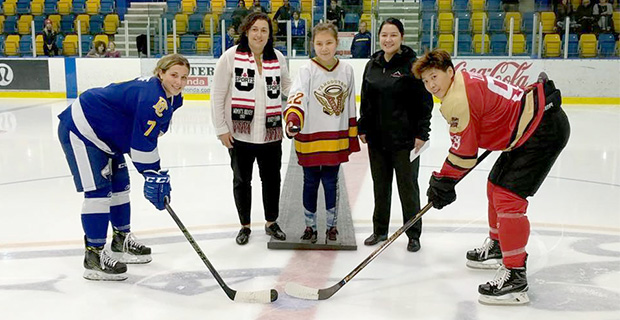 U.S. player Annie Pankowski and Meaghan Mikkelson battle in front of Canadian goalie Ann-Renée Desbiens in the first of a five-game series the U.S. and Canada will play against each other. (Courtesy of Hockey Canada Twitter)

Brianna Decker scored two goals as Team USA skated to a 5-2 win over Team Canada in the opening of a series of games between the two national teams as they prepare for the 2018 PyeongChang Winter Olympics.

“It’s always a match that demands the best of both teams and today was a bit more one-sided so we will have to get better and we have a few months for that,” said Team Canada goaltender Ann-Renée Desbiens. “I was really excited to play today and it was special for me to play in front of the hometown crowd but it wasn’t the performance that I’d hoped for. A lot of things I’d like to change, but unfortunately, that’s how it goes.”

Eight different U.S. players registered points in the series opener of a five game series that was played in Quebec City.

Canada appeared to get on the board first, however the goal was waved off. Natalie Spooner drove down the boards and behind the U.S. net, passing the puck out front. It went off the skate of the trailing Bailey Bram and across the line but was deemed to be kicked in.

Instead, it was Hilary Knight who led things off. She knocked in a loose puck in front of the crease, giving the U.S. a powerplay goal and the 1-0 lead at 9:05 in the first period.

The U.S. struck again with Decker burying a rebound. However, Canada wouldn’t go into the dressing room without making their mark on the scoreboard.

With a loose puck sitting for the taking, Meghan Agosta hustled down the ice. U.S. netminder Maddie Rooney slipped while coming out to challenge for it leaving Agosta with an open net to put the puck in and cutting the lead 2-1. The goal put Agosta in the lead for most goals scored against the U.S. (20) on Canada’s 28-player centralization roster.

The U.S. dominated the second period. With just over a minute into the frame, Annie Pankowski converted off a centring pass. Alex Carpenter then scored shorthanded after intercepting a weak cross-ice pass by a Canadian defenceman to give the U.S. a 4-1 lead.

Decker added her second goal of the game while on the powerplay. She ripped a one-timer off the face-off past Desbiens.

Canada didn’t get record a shot on the U.S. netminder in the second period until nine minutes into the frame.

“Tonight wasn’t the kind of game we can play, we’ve played significantly better in the past and we will need to get better moving forward. We always look forward to playing these games and tonight wasn’t our typical performance and we need to be better as move ahead,” said Team Canada head coach Laura Schuler.

The lone goal of the third period came on a nice passing play with Jillian Saulnier’s backhand finish off a behind-the-net feed from Brianne Jenner.