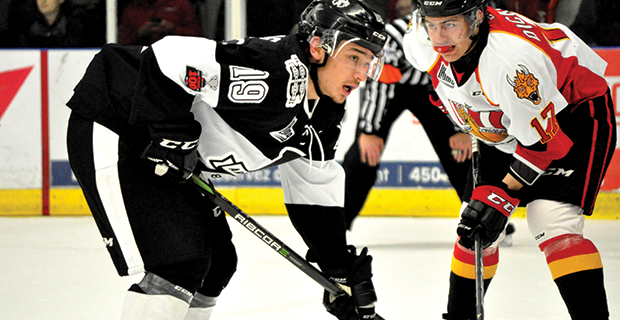 After drafting QMJHLer Nikita Kucherov in the 2011 NHL Entry Draft, Tampa has returned to Quebec, this time to pick up Blainville-Boisbriand standout Alex Barré-Boulet. (Antoine Meunier)

Google Maps lists the trip as over 2,300 kilometres long.

It’s even more challenging if you are trying to make that trek as a QMJHL player to a spot with one of the elite teams in the NHL.

But that’s the journey Blainville-Boisbriand Armada F Alex Barré-Boulet is welcoming after the Tampa Bay Lightning signed the 20-year-old forward to an entry level contract in early March.

“I was very happy when Tampa Bay offered me a contract with their organization,” the 20-year-old said before a recent road game in Gatineau.

“It’s an honour to be recognized by such a great team that has so many fantastic players. I am very excited to be given the opportunity to earn a spot and play for the Lightning one day.”

The Lightning is known for their offence and exciting goal scoring ability with the likes of Nikita Kucherov, Steven Stamkos, Brayden Point, Yanni Gourde and Tyler Johnson to name a few of their skilled point producers.

Except for Stamkos, who stands 6’1” tall and weighs 194 pounds, not one of the other aforementioned players is over six feet.

Those measurements are similar to Barré-Boulet who is listed at 5’10”, 165.

Tampa Bay found lightning in a bottle once before when they selected a smallish, Kucherov while playing in the KHL and a season in the QMJHL with the Quebec Remparts and Rouyn-Noranda Huskies.

The new NHL is all about foot speed, mobility and quickness, which defines Alex’s modus operandi.

Since his minor hockey days, Alex has possessed the speed to wheel around the rink and put up serious numbers on the score-sheet.

In his last season of Midget AAA with the Quebec City-based Levis Commandeurs, he finished with 40 points and 21 goals in 32 games.

The Drummondville Voltigeurs liked what they saw and selected him in the 6th round (102nd overall) in the 2013 QMJHL Draft.

Barré-Boulet paid immediate dividends for Drummondville in his rookie campaign with 23 goals and 51 points.

In his second year, he cracked the Top 10 in league scoring during the regular season, with 89 points.

Midway through 2016-17, the Armada acquired the diminutive speedster to help the team in its run to the President’s Cup final.

The move was a success as Barré-Boulet finished the year with 81 points and picked up another 31 in the playoffs.

He finished one point behind Saint John F Mathieu Joseph in the postseason as the Sea Dogs swept the Armada in the championship final.

Joseph just happens to be the property of the Tampa Bay Lightning pick as well.

Now in his overage year, Barré-Boulet picked up the league scoring title with 53-63-116 points and is one of the leaders with the Armada who, like Tampa Bay are known for their high-powered offence.

Blainville-Boisbriand is back in the hunt for this season’s President’s Cup with Joel Bouchard at the helm of the Armada ship.

He identified Barré-Boulet’s skills and did not hesitate in making a deal to bring him to the Armada through last season.

“Alex has been a force for us on the ice with his play and leadership since trading for him at last year’s trade deadline,” said Bouchard.

“He’s a large part of our success this season along with several other players who form the core of our team. We’re very happy that he signed with Tampa Bay it’s a great opportunity for him, down the road to give pro hockey a shot. I think he has a fair chance to achieve that.”

Tampa Bay is a great destination for any hockey player with its sunny climate and the team’s penchant for playing the game at pace and catering to world class skills.

Barré-Boulet has already experienced playing hockey in sun belts. The first time was in 2016 as an invite to the Los Angeles Kings camp, the second came this past fall when the Vegas Golden Knights reached out.

“I’ve never been to Tampa Bay but I’m excited to attend their development camp,” said Alex.

“I learned so much when I went down to L.A. and Vegas. Now it’s up to me to work hard over the summer to become stronger, faster and adjust to playing against bigger and stronger players. It’s never been easy as a small player but I have the determination and character to get to the next level.”

Tampa Bay is counting on that and optimistic they found another player that will continue in their tradition of speed and skill.