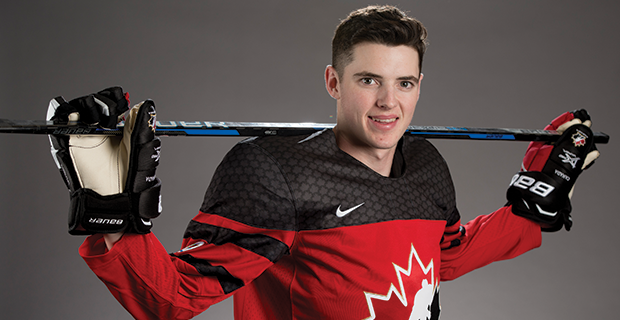 Drake Batherson was traded from Cape Breton to the Blainville-Boisbriand Armada a few hours after scoring two goals in Canada’s 8-2 quarterfinal win over Switzerland on Jan. 2. (Matthew Murnaghan/Hockey Canada Images)

The Swiss needed a vote of confidence heading into Tuesday’s IIHF World Junior Championship quarterfinal against Team Canada, but they got the opposite from their head coach.

When asked what sort of game he was expecting out of the Canadians, Switzerland coach Christian Wohlwend opted to take the brutally honest and highly cynical approach.

While there’s something to be said about blunt honesty, the way Wohlwend opted to throw his players under the bus before they even had a chance to take a face-off likely put the Swiss forward on the wrong foot.

Yes, Canada boasts some of the most top-tier talent at the tournament. Yes, the Swiss were convincingly ousted in an 8-2 loss, just like Wohlwend suggested they would be. But it still doesn’t validate Wohlwend’s complete lack of faith in his players. There’s no disputing the fact that the Swiss were outmatched on almost every avenue, but it’s been proven time and again at this tournament that upsets can and do happen, and believing they’re possible is the first step in achieving them.

Being an unarguable underdog isn’t rare in hockey — especially considering the game is still growing in countries like Switzerland — but there’s a difference between being honest and selling your players short.

Take last year’s Stanley Cup playoffs as an example. The Ottawa Senators were seen as the underdog on every prognosticator’s list entering their Eastern Conference final series against the Pittsburgh Penguins, and they lost — but not until double overtime in Game 7.

Sens head coach Guy Boucher knew it was going to be an uphill climb for his players, and he didn’t mince words after dropping Game 5. But he also never admitted defeat until his team had lost all four games.

“We know they're a better team,” Boucher told reporters. “Everybody knows that on the planet. They're the Stanley Cup champions. They're the best team in the league. That's no secret.”

It’s a loud statement for the opposing coach to make in a narrow 3-2 series, but Boucher made it clear he was only referring to the matchup “on paper.” Boucher insisted defeating a team like last year’s Penguins was “about putting our strengths on the ice.”

When it comes down to a single game, it’s not about who the better team is in the grand scheme of things, it’s about who can pull out the victory when it matters most — and after beating Carter Hart twice in Tuesday’s quarterfinal, it’s safe to say Wohlwend underestimated the Swiss players.

Czech Republic head coach Filip Pesan presented another professional way to approach the question after pulling off a stunning upset over Finland in Tuesday’s quarterfinals.

Entering Thursday's semifinal against Canada as an overwhelming underdog, Pesan simply suggested the pressure is all on the Great White North. And he’s right.  No one is expecting the Czechs to pull off their third upset of the tournament — they’ve already taken down Russia in the group stage and Finland in the quarterfinals — and that fact alone places Canada into a pressure situation.

It’s not just Canada’s goal to defeat lower-seeded teams, taking home hardware is arguably seen as a responsibility to the Canadian coaching staff and their players. The Czechs enter the semifinals knowing they’ve already beaten the odds.

Anything else is a bonus.