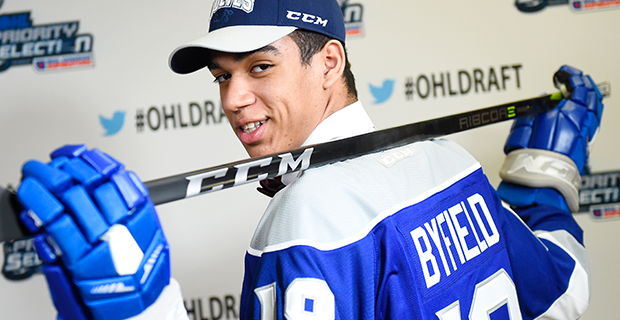 Quinton Byfield, one of the regulars on our monthly Top 10 Player of the Year finalist lists, was drafted first overall by the Sudbury Wolves in the 2018 OHL Priority Selection Draft. (Aaron Bell/OHL Images)

There have been some special players who were selected first overall in the Ontario Hockey League Priority Selection Draft, and Quinton Byfield is the latest one to join the fold.

While people may get overly excited about top picks long before they’re eligible for the NHL Draft, the York-Simcoe Express captain and HockeyNow Player of the Year finalist brings a unique package that makes him worth the hype.

For one thing, his near 6-foot-4, 207-pound frame makes him stand out immediately and he uses that to his advantage to play the game as if he’s a wrecking ball.

He also has Ferrari-like speed and the creativity and shooting ability of someone bound for OHL - maybe even NHL – stardom.

The OHL scouting report starts off its review on him by saying he’s the type of player that doesn’t come around very often.

The Sudbury Wolves, one of the four teams who didn’t make the playoffs, will be the ones benefiting from his skillset as he starts off his OHL career. They didn’t hesitate to make him this year’s first overall pick after he scored 48 goals and 44 assists in just 34 regular season games with the Express to earn the OMHA ETA Player of the Year.

Byfield’s York-Simcoe teammate, Evan Vierling, will be the centrepiece in another OHL rebuild. Coveted by OHL scouts mainly for his skating ability, the 6-foot centre, was taken second overall by the Flint Firebirds.

Vierling scored nearly two points a game with 63 points, including 27 goals, this season.

Like Byfield, he was a big reason why the Express were able to win the OMHA championship and make it to the semi finals of the OHL Cup.

Byfield and Vierling going 1-2 marks the first time since 2012 that teammates were picked with the first two selections. Connor McDavid and Roland McKeown, then with the Toronto Marlboros, were the last ones to do it.

Rounding out the first four were a pair of Marlies. Power forward Will Cuylle was picked third overall by the Peterborough Petes and Jamie Drysdale was the first defenceman taken when he was selected fourth by the Erie Otters.

Cuylle scored 33 goals and added 29 assists in 45 games this year.

Drysdale, another Player of the Year nominee, finished the season with 50 points (eight goals and 42 assists) in 57 games and was named the GTHL’s player of the year. Fellow POY shortlisted players Cole Perfetti, Lleyton Moore and Ryan O’Rourke were also drafted in the top 20.

The rest of the first round went as follows: