Sting Soar Out of the Gate Early in OHL season 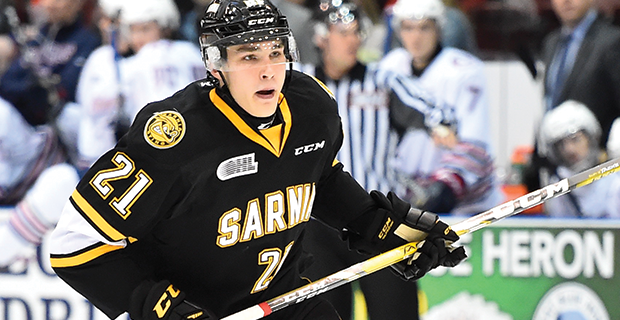 Adam Ruzicka of the Sarnia Sting is tied for the OHL scoring lead with 12 points. (Aaron Bell/OHL Images)

There’s some hesitancy to read too much into the standings early on in the OHL season, and understandably so.

It’s a long season and there’s a lot of good teams that don’t truly get up to speed until sometime in November, maybe even later.

Exhibit A is last year’s Mississauga Steelheads, who entered the season with high expectations, but sat in last place in early December before going on a run to the OHL final.

Still, there is some surprise with how a number of teams have performed early on as some clubs approach the 10-game mark in the season.

Sarnia Sting (6-1): Aside from Jordan Kyrou, it didn’t seem like the Sting would have that much star power entering this season. They’ve been on fire as of late with five straight wins and Adam Ruzicka is tied for the league lead in scoring with 12 points. Meanwhile, Kyrou has been strong since coming back from training camp with the St. Louis Blues.

Barrie Colts (5-2-0-1): We knew they’d climb back up to elite status eventually after a last place finish last year, but it could come sooner than expected if their first batch of games are any indication. Top NHL Draft prospect Andrei Svechnikov has been electric while Alexei Lipanov and Lucas Chiodo are among the league’s top scorers too.

Kitchener Rangers (5-2-1): Overage goalie Anthony Dumont-Bouchard was waived in the QMJHL, then picked up by the Colts and traded to Kitchener for a 14th round draft pick. That’s money well spent as far as the Rangers are concerned. He has a spotless 5-0 record and leads the league with a .940 save percentage.

Kingston Frontenacs (5-1): The best thing so far is that the Frontenacs are relying nearly as much on Jason Robertson, who scored 42 of their league-low 179 goals last year. They’re scoring by committee with players like Eemeli Rasanen, Linus Nyman and Nathan Dunkley also driving the offence.

London Knights (1-6): There was expected to be a slight drop off with talented players from last year’s core, but they’ve really struggled with Victor Mete and Alex Formenton still in the NHL with Montreal and Ottawa respectively. For now, they’ll get the benefit of the doubt as many believe they’ll turn their season around.

Mississauga Steelheads (1-4): Last year’s Eastern Conference champions are in a similar situation as London with top players Michael McLeod (New Jersey) and Owen Tippett (Florida) still in the NHL. They just traded Austin Osmanski to Peterborough in an effort to restock their draft cupboard and free up minutes for younger defencemen.

Sudbury Wolves (1-6): They lost a number of players like Alan Lyszczarczyk, Zach Bowman and Owen Lalonde to trades before the season, which gave us a hint that they may struggle this year. So far they have, but they’ve still got top sniper Dmitry Sokolov and rookie Blake Murray, who has shown great upside early on.

Saginaw Spirit (1-4): Goalie Evan Cormier has been strong so far in his overage season, but goals have been hard to come by with the Spirit registering a league-low 12, albeit in five games while a lot of teams have played seven or eight. Saginaw has gone through a few seasons of rebuilding and all indications suggest it will continue this year.