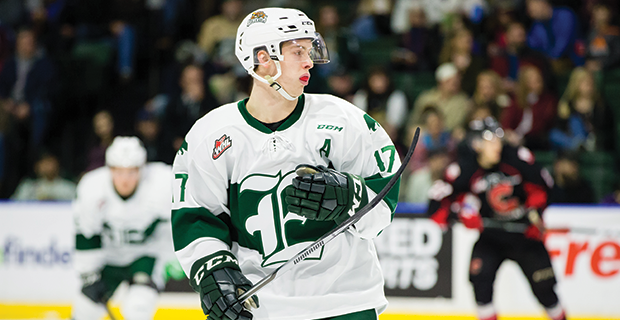 Overage forward Matt Fonteyne is taking the Silvertips' recent road woes in stride and looks at the team's early season challenges as opportunities rather than obstacles. (Chris Mast photo)

The Everett Silvertips have been thrown into the fires of adversity to start the  2017-18 Western Hockey League season.

A gruelling travel schedule and star goaltender Carter Hart on the sidelines due to illness, the Tips have had their work cut out for them, but overage forward Matt Fonteyne says every challenge presents an opportunity.

“Whenever you don’t have Hart in net, he obviously gives us a really good chance to win every night, but this is a chance for the young guys and the new guys to step up and find a new role on the team,” said Fonteyne, who leads the Silvertips with six goals on the year. “It shows the kind of character we have on our team.”

While the Silvertips started their season with a win and a loss on home ice, they’ve been on the road ever since and won’t return to Xfinity Arena until Oct. 18. A shootout win in Kelowna and a quick run through the US Division set the stage for Everett’s 3,157-kilometre (1,962-mile) road trip through Alberta. While they kicked off the swing with a narrow 1-0 win over the Calgary Hitmen, the Red Deer Rebels, Edmonton Oil Kings and Medicine Hat Tigers sent the Tips into three-game slide with two more matchups left before returning to Washington.

For many members of the Silvertips, the nine-day trip through the Central Division is their first taste of life on the road, but Fonteyne says he’s proud of the way they’ve been handling it.

“It’s been a tough schedule so far with a lot on the road, and the road really brings out what you can bring to the team so I think the young guys are taking on new roles they weren’t expected to play at the start, but they’re taking I really well,” said Fonteyne. “Road trips are where you kind of have to dig deep and find your inner self.”

While there’s no denying that Hart’s presence can be a swing factor in close games — such as Everett’s 5-4 loss to the Medicine Hat Tigers on Wednesday — Fonteyne says it’s a great opportunity for young goaltenders Kyle Dumba and Dorrin Luding to soak up some minutes, while the group of five in front can also serve to benefit from the added challenge.

“[Hart has] been the top goalie in the CHL for two years in a row, but I think this kind of gives our other goalies a chance to prove what kind of game they bring to the team, as well as just defence and for our forwards, just bringing a new role to step up for,” said Fonteyne.

The Silvertips head into the Windy City to take on the Lethbridge Hurricanes Friday before making the trip to Cranbrook to face the new-look Kootenay Ice Saturday.