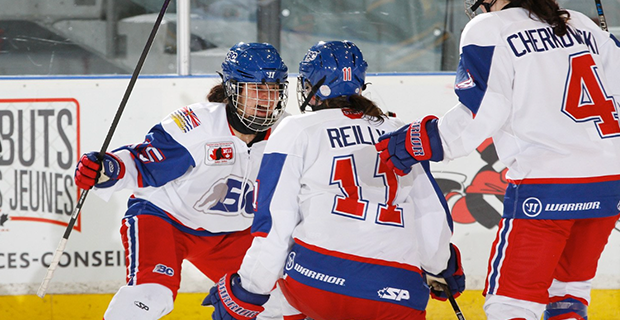 Team B.C’s Katie Chan celebrates with Kate Reilly and Anne Cherkowski after scoring a goal against Manitoba in the preliminary round. (Courtesy of Hockey Canada)

Team B.C. and Ontario Blue march into the 2017 National Women’s Under-18 Championship semifinals on Saturday undefeated.

Winning just their second medal at last year’s nationals, Team B.C. will face off against the annual favourites to win Ontario Red — who have captured 10 of the 11 gold medals in the tournament’s history.

B.C. has been backed by top notch goaltending and defence that shut down opponents in their first two preliminary games. Kendra Woodland (Kamloops, B.C./OMAHA) turned aside 28 shots to earn a 2-0 shutout in the opening game against Saskatchewan. That was followed by a 3-0 win over Manitoba with Kate Stuart earning the shutout facing just 13 shots.

On the other side of the ice, Team B.C. hasn’t been too shabby at putting points up on the board either. They are led by Reece Hunt (Nelson, B.C./Okanagan Hockey Academy, CSSHL) who opened scoring in the tournament in the win against Saskatchewan and has 2 goals and one assist to lead the team, tied for second overall in the tournament, after the preliminary round.

B.C. has also proved they can bounce back under pressure. Tied 1-1 against the host Quebec in the third period, Danika Pasqua (Langley, B.C./Pacific, JWHL) and Emma Hall (Maple Ridge, B.C./Greater Vancouver, BCFMAAA) put them in a comfortable spot with a 3-1 lead. Quebec punched back with two of their own goals to tie the game — the equalizer coming on the power play after Kate Reilly pitched the puck over the board while trying to clear it.

Quebec, needing the win to move forward to the semifinals, pulled their goalie for an extra attacker with the draw deep in the B.C. end. B.C. won the faceoff clearing the puck up the boards. Speeding down the ice, Alex Allan (Abbotsford, B.C./Pacific, JWHL) won the foot race against a Quebec player throwing the puck at the empty net but hitting the side. Pasqua picked put the rebound and took advantage of the empty net to give B.C. the win.

“It was a great team effort, and being able to bounce back after we got down for the first time this tournament, but we really pushed back and it was an overall team effort for us today," said Pasqua, after the comeback win over Quebec. "There’s something really special about our team this year. Everyone’s playing together, everyone’s playing as a team. This is the first time we’ve ever played together, and it’s really showing that our chemistry is there and that we’re going to do anything we can to win."

Ontario Red has had a bit of a bumpy ride to the semifinals compared to years past. The three-time defending champs opened the tournament with a 2-1 loss to Atlantic.

Deadlocked, with no goals scored in the first period, Atlantic struck twice in the matter of less than two minutes. Sarah Fillier (Georgetown, Ont./Oakville, PWHL) managed to cut the lead to one with a goal late in the third period, but the Atlantic net minder Maddie Beck stood strong to earn the win, stopping 32 shots in the game.

Provincial rivals then met with Ontario Blue coming out on top beating Ontario Red 3-1. Red’s only goal of the game came from Lexie Adzija (St. Thomas, Ont./Oakville, PWHL) in the second period.

B.C. and Ontario Red face-off at 4:30 p.m. (EST) on Saturday. Both semifinals are streamed online at hockeycanada.ca.

Loving the close scores at Women's Under 18 Championship. All provinces are getting better and better. @HC_Women

In the other semifinal (7:30 p.m. EST, Saturday) Saskatchewan will face Ontario Blue.

Saskatchewan has never played for a nationals medal and has won just eight games all-time coming into the 2017 tournament. Their highest placement at nationals is fifth place.

Saskatchewan was shut out by B.C. in their opening game but bounced back to beat host Quebec 3-2.

“When our kids step up like that, I think there’s a lot of pride to show people we have a real good league back home, we have some real good players. When you get a chance to be a part of something like this, it means a lot to the kids – it’s a real important time for them, a special time – and as coaches, it’s more of a privilege to work with real quality players, quality kids, which we have on this team,” said head coach Terry Pavely.

“Our team really started to click in this third game. In the first game, we were a fresh team — we hadn’t really played together. Now we’re just moulding together and every game we just keep getting stronger and stronger as a team. [The win against Quebec] was so important; it just gave us a complete confidence boost. We’re so confident as a team together, we trust each other, and every single win is just a boost of confidence,” said Kennedy Bobyck (Regina, Sask./Edge School, CSSHL).

Saskatchewan celebrates its 3-2 win over Quebec at #U18Nationals to close out Day 2 of action at the event. pic.twitter.com/r0ii3Cpx6B

Building off that win, Saskatchewan defeated Manitoba 4-0 to finish off the preliminary round. Bobyck proved to be a force on the power play, scoring two of the team’s goals with the advantage. The team’s other goals came from Anna Leschyshyn (Grasswood, Sask./Saskatoon, SFMAAAHL) and Kate Ball (Saskatoon, Sask./Prince Albert, SFMAAAHL).

Ryan Fontaine turned aside 20 shots to earn the shutout.

Saskatchewan will need that offence when they face the undefeated Ontario Blue in the semifinal on Saturday.

“We’re trying to take every game as its own individual challenge and not look at it as a do-or-die game, just as a next step in our journey. We have to continue to play the way we’ve been playing, which has got us to this point – it’s about focusing on the little details and habits that have been working for us,” said Ontario Blue head coach Jessica Turi.

Ontario Blue has only allowed two goals against in their three preliminary games. They also have proved they have a deep team. Ontario Blue opened the tournament with nine different players combining to earn a 4-0 win over Alberta. Goaltender Erica Fryer (Amherstburg, Ont./London, PWHL) turned aside 26 shots to earn the win.

One of the goals against came in their next game against Atlantic on the power play, however, once again the depth of Ontario Blue came through. Malory Dominico (North Bay, Ont./Barrie, PWHL), Nicole Kelly (Brantford, Ont./Etobicoke, PWHL), Alexa Hoskin (Belleville, Ont./Kingston, PWHL) and Leah Herrfort (Palmerston, Ont./Cambridge, PWHL) all scored goals for the team.

It was the battle of Ontario in their final game of the preliminary round with Blue coming out on top 3-1.

Blue’s Courtney Coreia (Whitby, Ont./Toronto, PWHL) leads the team and is first overall in the tournament in points with four. Forward Darcie Lappan (Harrington, Ont./Kingston, PWHL) sits on top for most assists in the tournament.

“Everyone buys into the system, we have the same goal, and we all worked hard together to get the win. [Being at a national championship] is an unreal feeling; you’re playing against the best girls in Canada and it’s great,” said Lappan.

Manitoba will play Atlantic for seventh place and Alberta will play Quebec for fifth place.