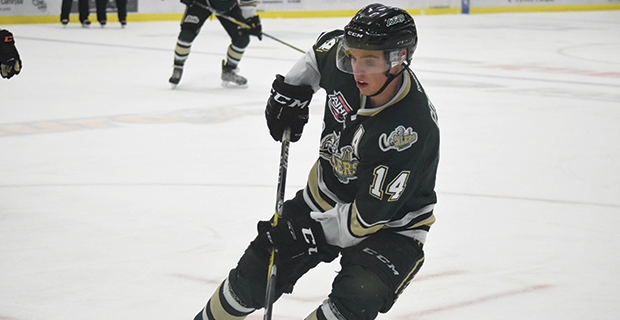 Kyle Gordon of the Okotoks Oilers had a huge weekend in front of scouts at the annual AJHL Showcase as he helped his team win both games while recording six points (one goal, five assists). (Photo courtesy of Billie Barrett - on Twitter @_BillieBarrett_)

Last June, the Alberta Junior Hockey League (AJHL) had three players drafted into the NHL after a three-year absence having no players selected.

It was a notice to the scouting world what kind of talent exists in the Alberta Junior ranks.

Cale Makar went number four overall to the Colorado Avalanche and was the highest AJHL player ever drafted, plus the second highest Junior A player ever. The AJHL became a more desirable location for players, scouts and interest.

Last weekend at the annual league Showcase, all teams descended on Camrose, home of the Kodiaks, to play two games in front of NHL and college scouts.

Plenty of players used the weekend to woo scouts with their skills, and here’s who put up strong numbers.

Kyle Gordon, Okotoks Oilers: After his first full season in the AJHL, Gordon is off to a hot start for the even hotter Oilers squad. He recorded six points at the AJHL Showcase and should draw interest from college as the almost 19-year-old has yet to commit to a college.

Kylor Wall, Okotoks Oilers: The tall, 20-year-old defenceman helped pace the Oilers with solid offence from the backend. He had a goal and assist in both wins and has nine points in seven games this year. He had a standout year for the weak Calgary Mustangs last year so he must be relishing the opportunity to win with Okotoks this season.

Liam Motley, Whitecourt Wolverines: Motley was expected to pick up the offence for his team after the Wolverines lost a few key contributors this offseason and he has been doing well so far. At the Showcase, the Cornell commit recorded two goals and four assists.

Orca Wiesblatt, Brooks Bandits: Both Wiesblatt brothers had strong weekend, but Orca recorded a goal and assist in both Showcase games. He’s a breakout candidate after struggling with injuries much of last year.

Brand Wallis, Sherwood Park Crusaders: With two goals and three helpers, the Crusaders’ Wallis has already matched last season’s assist total. The small forward is having a good start to the season Sherwood Park and hopefully sparked some interest in the college ranks.

Jake Ashton, Canmore Eagles: Consecutive games with two goals at the Showcase and Ashton has already matched last year’s total with five. He’s off to a start better than ever, and with an increased role, the Eagles need Ashton to have a dominant campaign.

Edouard Michaud, Grand Prairie Storm: The 20-year-old from Quebec matched Ashton’s output with two goals in each showing and increased his goal scoring lead in the league. He’s up to 11 tallies in eight contests.

Josh Giacomin, Calgary Canucks: Giacomin is a veteran of the AJHL, spending time in the league since 2012-13 and now to his third franchise. He had a solid showing last year with 19 goals and 19 assists and will hoping to surpass that in his last kick at the can.

Just one shutout was recorded, and that was Ashton Abel of the Calgary Mustangs, who stopped all 23 shots against Bonnyville. Two others, Reece Klassen (Lloydminster) and Hunter Virostek (Drumheller), turned in impressive starts as both stopped more than 30 shots with only one goal against.

While a big goal of the Showcase is for players to get interest from postsecondary institutions, there were pro scouts in attendance, too.

Thanks to the three draft picks from the AJHL last year – Makar in the first round, Ian Mitchell in the second and Parker Foo in the third, there appears to be some players the scouts have targeted ahead of the year.

Okotoks’ Jacob Bernard-Docker is committed to the University of North Dakota in 2019 and was a fifth round pick in the WHL Draft by Swift Current. He’s a key member of the undefeated Oilers this season.

Sean Comrie of Spruce Grove is another young commit to the NCAA ranks, heading to the University of Denver in 2019. Not only was he a high selection, going in the second round of the WHL draft, but he also represented Canada at the World Hockey U-17 Tournament.

Defencemen heading to the NCAA is a trend and Lloydminster’s Daniel Hilsendager is the next one who could potentially hear his name called at the NHL Draft. He’s already an assistant captain at 17 and will be playing at Western Michigan University in two years. With 21 points from the blueline last year, much is expected from Hilsendager.

Although two years older than the first three players mentioned, Brooks’ captain Dennis Cesana could be a late round pick if he duplicates what he did last year: 52 points and the second-highest scoring defenceman in the AJHL behind teammate Makar. He’s already got seven points in eight games for the Bandits and will head to Michigan State University next year.

More players could play their way into draft interest, especially if scouts pay more attention to the AJHL after the increased reputation.