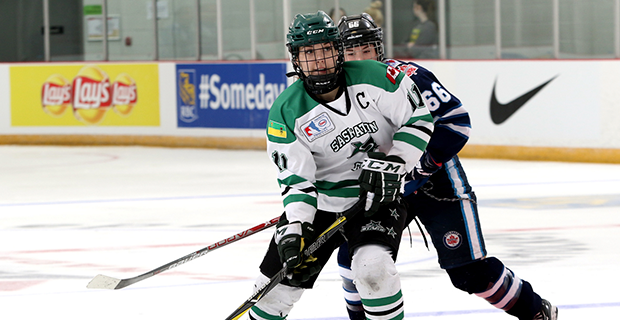 Mackenna Parker, captain of the Saskatoon Stars, was honoured with the Hockey Canada Isobel Gathorne-Hardy award given annually to a player who best demonstrates leadership and dedication in women's hockey. (Dennis Pajot/Hockey Canada)

It comes as no surprise to Saskatoon Stars head coach Greg Slobodzian that Mackenna Parker was chosen for the Hockey Canada Isobel Gathorne-Hardy award.

“Mackenna is a girl that is not your typical, average teenager. She is always very focused … she takes hockey very seriously and is very passionate about the game. In everything she does, she is passionate. She is a very involved strong leader and role model,” said Slobodzian.

The annual award, which has previously gone to players like four-time Olympic gold medallist Caroline Ouellette, is given to the player who best demonstrates leadership and dedication in women’s hockey. Those two characteristics, along with a team first mentality, are what Parker lives for. Her coach says you can see it in her eyes whenever she is around her teammates.

“I just try and put myself out there with my attitude on the ice and by working hard. The alternate captain Jordyn Holmes, she is pretty vocal in the dressing room before games. But, once the game starts and we hit that ice, I turn into a different person. I get really loud and try to support everyone,” said Parker. “Now, in my last year with the team, I try and put the younger girls under my wing and share the experiences I have had just like some of the older players did for me when I was a young girl on the team.”

Off the ice, Parker tries to make an impact promoting women’s hockey and volunteering her time with the rest of her team by reading to children in elementary schools and volunteering at soup kitchens.

Parker didn’t have to look far for a hockey role model. Fellow Saskatchewan native Emily Clark, a 2018 Olympic silver medal winner with the Canadian women’s national team, is someone she patterns herself after.

“She played for the Stars and I want to follow in her footsteps. By making it to the Olympic team, she showed all of us girls from Saskatchewan that you can follow your dreams and realize them by working hard,” said Parker, who suited up for the U18 Canadian team at the 2017 IIHF U18 Women’s World Championship last year in Russia, winning a bronze medal.

Slobodzian has known Parker since she was 11 years old, when she first started playing alongside his own daughter Willow. The hockey players grew up on and off the ice together and Slobodzian has become like family for Parker.

“She still reminds me of one of the first times I skated with her and she was struggling to pick up passes. She reminds me how I made some sort of comment on how she wasn’t doing very well, I’m sure I didn’t use those words exactly. I definitely can’t say the same thing anymore.

She shoots better than most players her age and what has really developed is her vision on the ice,” said Slobodzian.

Parker is quick to point out that her family and having Slobodzian as her coach has made her not only a better hockey player, but a better leader and person.

In her third crack at vying for a gold medal at the Esso Cup national midget championship (she has previously won bronze with the Stars), Parker helped lead her team to a perfect 3-0 record through the first half of the preliminary round (which was still ongoing by press deadline).

She also has represented her province at the Canadian championship and will head to Boston University next year.

Through it all, Parker knows that it always comes down to one thing — truly being a team player.

“I think so. If the chemistry is not there, then it is not there on the ice either. All the great experiences I have had are because of the team, not just me. The teams I have been on, we make time for each other off the ice too. The Stars are the tightest group I have been a part of. I love being with them and it is nice to know when you go to the rink, you have your hockey family too.”