Red, White and Black: A Guide on Canadian Players to Watch at 2017 World Under-17 Challenge 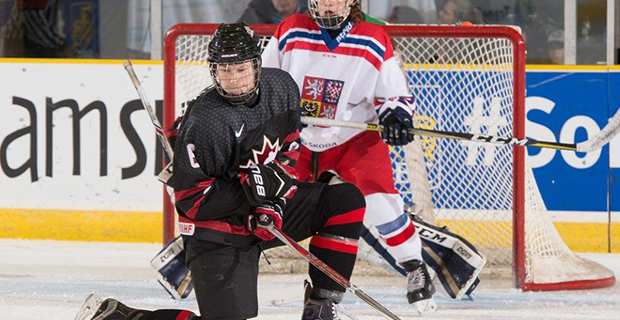 Defenceman Kaedan Korczak, the first overall pick at the 2016 WHL Bantam Draft, has already made his mark on Team Black early in the World Under-17 Hockey Challenge. (Matthew Murnaghan / Hockey Canada Images)


You’d be hard pressed to find a Canadian NHL star who didn’t get their start on the international stage through the World Under-17 Hockey Challenge.

Whether it’s Connor McDavid, Steven Stamkos or PK Subban, the list of players who have gone on to greatness after playing in the tournament is endless.

This year’s tournament is happening this week in Dawson Creek and Fort St. John, BC and we’ve assembled just a few players to look out for on each of the three Canadian squads.

The red team is stacked up front with first overall picks from all three major junior leagues.

There’s Alexis Lafrenière (Rimouski Océanic), who started off the tournament with a goal and an assist in a 4-2 loss to Finland, Peyton Krebs (Kootenay Ice), who also scored in the game and Ryan Suzuki (Barrie Colts), who could be just as promising as his older brother Nick, a first-round pick of the Vegas Golden Knights in the NHL Draft.

The younger Suzuki led Team Red with a goal and two assists in a 7-2 win over Sweden.

All aforementioned players have been important pieces for their respective clubs already. Lafrenière’s speed, vision and hands have already translated well to the QMJHL, as evidenced by his 17 points (seven goals and 10 assists) in 14 games.

Krebs was called up for a short stint with the Ice last year and scored six points in as many games and is just under the point per game mark with 13 in 15 games this year. Suzuki is on a similar pace with 11 points in 14 games.

Graeme Clarke has helped the Ottawa 67’s right away with five goals relatively early in the season.

He has shown all the tools of a potential leading goal scorer in the OHL and those skills should bode well for him now that he’s playing exclusively against players in his own age group.

Also on the white roster is QMJHL sixth overall pick Nathan Légaré (Baie-Comeau Drakkar), who picked up a goal and an assist in Team White's second game of the tournament, a 4-3 overtime loss to the United States.

He’s had a slow start to his junior career with just a single goal through 15 games, but he’s a big kid and it’s expected he’ll add to his 6-foot, 196-pound frame as time goes on.

From the WHL, eyes could be on Connor Bouchard (Tri-City Americans), the diminutive forward who wasn’t drafted until the eighth round in 2016, but has been a nice addition to the Americans so far.

Standing in at only 5-foot-6 and roughly 155 pounds, he has fit into the WHL nicely, registering five points, including two goals in 12 games and picked up an assist in a loss to the States.

Sure, Jamieson Rees (Sarnia Sting) is only a rookie, but that hasn’t stopped his club coach Derian Hatcher from throwing him into the fire.

Lately, Rees has been plugged in on the top line with OHL leading scorer Jordan Kyrou and Drake Rymsha and the rookie has registered eight points (two goals and six assists) in as many games for a team that started the season 15-1.

Team Black should also benefit from Alex Beaucage (Rouyn-Noranda Huskies), the Huskies’ second-round pick who has an impressive 10 points (two goals and eight assists) in 16 games.

On the back end, Kaedan Korczak (Kelowna Rockets), can be relied on to play in all situations. Kelowna’s first-round pick in the 2016 WHL Draft is a big, all-around solid defender who skates well.

These three players all contributed on the only goal in Team Black’s 1-0 tournament opening win over Team White. Beaucage picked up the goal in that tilt and added a goal and an assist in a 5-0 win over the Czech Republic while Rees added a goal in that game.

In goal, Roman Basran (Okanagan, BCMML) and Nolan Maier (Yorkton, SJHL) each have a shutout to their credit.

Also of note: Two HockeyNow Minor Hockey Players of the Year are in action this week and one of them is playing for the red, white and blue.

Jack Hughes, an electrifying prospect for the 2019 NHL Draft, has a tournament leading five points (three goals and two assists) in two games for the undefeated Americans.

Born and raised in the United States until he was five, Hughes and his family moved to the GTA and he garnered a lot of attention as a star with the Mississauga Rebels and Toronto Marlies.

Team Red also has a HockeyNow Player of the Year on the roster, 2016 winner Bowen Byram (Vancouver Giants).

He hasn’t shown many problems adjusting to the WHL with nine points (a goal and eight assists) and a plus-six rating in 15 games to start his career.

Back to Top
By Iain Colpitts| November 07, 2017
Categories:  Events