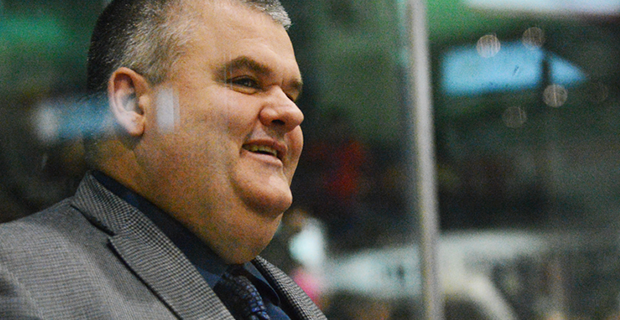 (Courtesy of the Brampton Beast)

Peter Goulet will still be a double duty guy.

But now it will be for just one hockey organization instead of two.

During the past two seasons, Goulet had served as the general manager of the Ontario Junior Hockey League’s Kingston Voyageurs and as the assistant coach for the Brampton Beast, members of the East Coast Hockey League, a pro loop considered two steps below the NHL.

Goulet, who estimates he racked up about 80,000 kilometres on his car this past season driving back and forth from Kingston to Brampton, will now turn his full attention to the Voyageurs.

This past week he resigned from the Beast, the Montreal Canadiens’ ECHL affiliate, and will now work solely for Kingston’s OJHL squad.

Besides continuing to serve as the Voyageurs’ GM, Goulet will now also be the club’s head coach.

Though he resigned from his pro post with the Beast to concentrate on his responsibilities with a junior franchise, Goulet aspires to return to the pro ranks at some point, ideally at the highest level.

“Of course one day I want to be working in the NHL,” said Goulet, who is 47. “But at the end of the day you never know where it will bring you. Hockey is a funny game. You’ve got to keep working hard. And you’ve got to win.”

Working for just the Voyageurs now will allow Goulet to be home with his family every night. Goulet and his wife Shannon have one daughter, Cheraton, who is beginning her high school studies this September.

“It’s safe to say [resigning from the Beast] is a move made to be home for all the sacrifices they’ve made for me,” he said.

The Voyageurs’ roster could potentially be a rather veteran-laden one as the club lost just a pair of 20-year-olds from last year. This coming season could feature as many as 15 returnees.

But at this point Goulet is unwilling to speculate on how his squad will fare. The Voyageurs will once again compete in the OJHL’s five-squad East Division.

The East grouping has been considered as the most balanced of the league’s four divisions for a number of years now.

The division includes the defending national Junior A champion Cobourg Cougars, who captured the RBC Cup on home ice this past May.

Kingston compiled a 28-16-3-7 regular season record during the 2016-17 campaign. With this mark ,the Voyageurs would have finished either first or second in two of the OJHL’s other divisions.

But with its 66 points, Kingston ended up in the East basement. Wellington also had 66 points but was awarded fourth spot in the division as it had registered more victories than the Voyageurs.