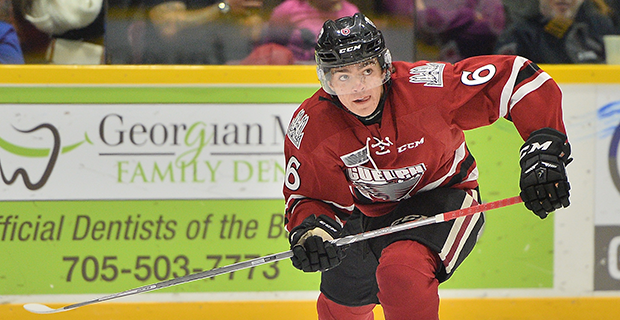 Ryan Merkley made a seamless transition into the OHL last season.

With 55 points (12 goals and 43 assists), he led all OHL rookies in scoring, becoming the first defenceman to do so in nearly 30 years.

It remains to be seen how he’ll follow up in his sophomore season, but fans will be watching him with much interest as he approaches the 2018 NHL Draft and appears to be a first-round prospect.

Merkley was the first overall pick in the 2016 OHL Draft and was highly coveted for his speed and vision.

His offensive instincts were on full display during his opening season with the Guelph Storm. He then went on to perform well for Team Canada at the Ivan Hlinka Memorial Tournament, picking up six assists in five games to help Canada win gold.

The points he generated may speak for themselves, but count on him to work on his defensive game to greater improve his draft stock.
While his 55 points were enough to lead the Storm in scoring, he also posted a team-worst -41 rating.

However, that could be a bit of a misleading stat considering Guelph allowed 95 more goals than they scored and spent two weeks of the season playing with only four defencemen, Merkley included.

That's significant because the pair worked together for many years with the Belleville Bulls and helped develop PK Subban, who like Merkley, has been a top offensive talent from the blueline.

Merkley will clearly be counted on for his skill set, but the verdict is still out on how much he’ll be able to develop on the defensive end.

Regardless, his talent alone makes him a can’t-miss prospect, and if he can grow into a leader on the Storm this season, that could go a long way for him as he looks to build the foundation for a long NHL career.

There will be many more prospects who are poised for a big year heading into the NHL draft. Here’s a look at some of this year’s top draft prospects. 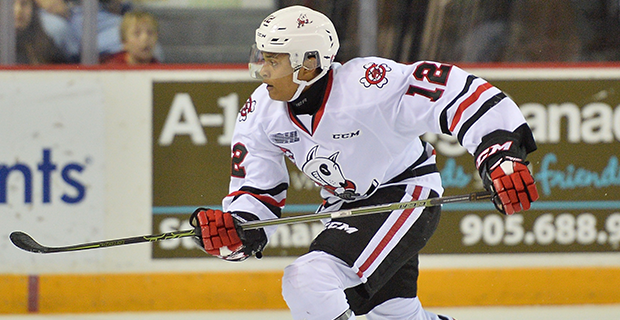 Another huge scorer, Akil Thomas was second only to Merkley in the rookie scoring race last year and is expected to be a key playmaker for Niagara once again this season. (Terry Wilson/OHL Images)

Andrei Svechnikov (F)
Barrie Colts
Expected to sign with the Colts any day now, the young Russian forward screams talent. He was selected by the Colts first overall in the 2017 CHL Import Draft and is a first overall candidate for next year’s NHL Draft.

After excelling with the USHL’s Muskegon Lumberjacks last season, he should fit in nicely with fellow Russian forwards Alexei Lipanov, a Tampa Bay Lightning prospect, and 2018 NHL draft prospect Krill Nizhnikov when he arrives in Barrie.

Akil Thomas (F)
Niagara IceDogs
He went above and beyond in his rookie season and looks poised to take on more responsibility on a young and promising IceDogs squad.

His 48 points (21 goals and 27 assists) were second only to Merkley in the rookie scoring race and he was instrumental in helping Niagara earn the final playoff spot in the closing weeks of the season.

Ryan excelled through the playoffs, earning top-line minutes alongside his brother and Spencer Watson as the Steelheads reached the OHL final.

Evan Bouchard, D, London Knights: Like McLeod, Bouchard has a late birthday and will have the benefit of playing a third season in the OHL before entering the draft.

He grew a lot as a defenceman last year and recorded 44 points (11 goals and 33 assists) as he was paired with Vancouver Canucks prospect Olli Juolevi for most of the season.

Giovanni Vallati (D)
Kitchener Rangers
He emerged as an elite skater and puck mover as the season went along and he finished the year on the OHL second all-rookie team.

One would assume he’d be a top-four defender, but it will be interesting to see where exactly he’ll fit in on the depth chart with hulking Winnipeg Jets prospect Logan Stanley joining the Rangers this season and Pittsburgh Penguins draftee Connor Hall poised to return as well.

Jacob Ingham (G)
Mississauga Steelheads
He got the chance to play often as a rookie for the Steelheads, who struggled heading into the new year and were looking for a shake up in goal. Ingham finished the year with 31 regular season games, followed by six in the playoffs, and will get the chance to be Mississauga’s No. 1 in 2017-18 with last year’s overager Matt Mancina moving on.