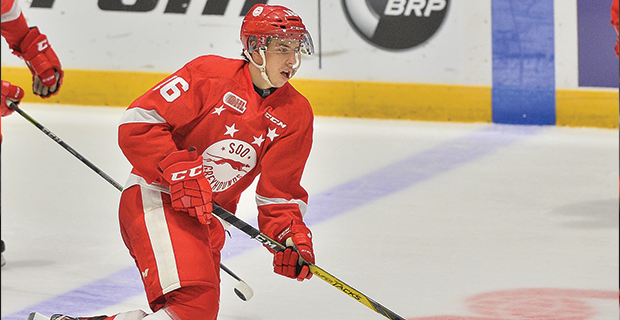 Morgan Frost and the Sault Ste. Marie Greyhounds are the top seed in the Western Conference as they head into the OHL playoffs. (Terry Wilson/OHL Images)

Is this the year we see another OHL team break through that proverbial glass ceiling? The Sault Ste. Marie Greyhounds certainly hope so.

Last year, it was the Erie Otters who won the OHL title and made it to the Memorial Cup final after they went through three years of having some powerful teams that fell just short in the playoffs.

The Greyhounds are somewhat similar in that they’ve been a strong team ever since 2013-14 but haven’t been able to make it past the Western Conference final since.

There’s a lot of reason to believe this year’s squad has what it takes to win it all.

What really stands out is their 23-game winning streak earlier this season en route to a league-high 116-point campaign.

Led by Morgan Frost, the OHL’s second-leading scorer and three members of Canada’s World Junior team (Boris Katchouk, Conor Timmins and Taylor Raddysh), they are definitely the most intimidating squad in the OHL.

They’ll start the playoffs against the Saginaw Spirit, a middle of the pack team in the West until a 2-7-1 stretch to end the season knocked them down to eighth place.

It’s one of eight playoff series to look out for as everyone starts their pursuit of the OHL title.

(1) Sault Ste. Marie Greyhounds VS (8) Saginaw Spirit
There’s no doubt the Greyhounds are heavy favourites in this series. The Canadian Hockey League’s top-ranked team finished 49 points ahead of the Spirit in the regular season.

A lot has been said about players like Frost, Raddysh, Katchouk and Timmins, but there are seven Greyhounds who have recorded at least 60 points while Matthew Villalta is a highly coveted goalie. No one on Saginaw has reached 60 points, but they’re a resilient bunch and perhaps overage goalie Evan Cormier can help them steal some games.
Prediction: Greyhounds in four

(2) Kitchener Rangers  VS (7) Guelph Storm
The Rangers were one of a few teams in the OHL to go all-in at the trade deadline. While their biggest acquisition, Logan Brown, was injured for a bit coming out of the World Junior Championships, he’s been a force to be reckoned with when he has played and more of the same can be expected for the playoffs.

Forty-goal scorer Adam Mascherin has been dominant as well and will be looking for his first long playoff run.

As strong as they are, the Rangers can’t afford to overlook the Storm, a team with a bright future led by youngsters Ryan Merkley and Cam Hillis.
Prediction: Rangers in five

(3) Sarnia Sting VS (6) Windsor Spitfires
Before the Greyhounds emerged as the top team in Canada this season, the Sting held that title. They jumped out to a 15-1 start and didn’t slow down very much en route to a 97-point season.

Red Tilson Trophy candidate and World Junior gold medalist Jordan Kyrou has been their undisputed leader while Drake Rymsha and Adam Ruzicka are tough to contain.

Although the Spitfires chose to be sellers at the trade deadline and don’t have a player who’s recorded at least 50 points this season, they do have Michael DiPietro, arguably the league’s best netminder.
Prediction: Sting in five

(4) Owen Sound Attack VS (5) London Knights
They may have lost a terrific goalie in Michael McNiven, but the Owen Sound Attack still have a lot of weapons left over from last year’s squad that made it to the Western Conference final.

Nick Suzuki is one of four players in the league who have reached 100 points while Kevin Hancock and Aidan Dudas have been great contributors as well.

The Knights invested more in youth with their trade deadline acquisitions, but they held on to Evan Bouchard, a 2018 NHL Draft top-10 prospect who led all OHL defencemen in scoring.
Prediction: Knights in six

(1) Hamilton Bulldogs VS (8) Ottawa 67’s
The Bulldogs have stocked up with a bevy of talent, including former Knight Robert Thomas to add to an experienced team featuring Brandon Saigeon and Matt Strome among others.

They may not blow teams out of the water offensively, but the Bulldogs have been built to win in the East this year.

First up for them in the playoffs are the Ottawa 67’s, a relatively young squad that still has proven leaders such as Travis Barron, Tye Felhaber and Sasha Chmelevski.
Prediction: Bulldogs in five

(2) Barrie Colts VS (7) Mississauga Steelheads
With lots of firepower on both teams, this series has the potential to be the most exciting one in the first round.

Top-3 NHL Draft prospect Andrei Svechnikov has delivered on expectations, scoring 40 goals in 44 games for Barrie, but it’s OHL leading scorer Aaron Luchuk and 50-goal man Dmitry Sokolov that are doing the most damage for the Colts.
Mississauga, last year’s OHL finalists, have underachieved this year, but still have their share of weapons, including 35-goal scoring defender

(3) Kingston Frontenacs VS (6) North Bay Battalion
Perhaps realizing they would lose a great goalie like Jeremy Helvig next season, the Frontenacs took a chance and added four top-end players at the trade deadline, including former HockeyNow Player of the Year Gabriel Vilardi, who has averaged nearly two points per game since the move from Windsor.

A combined 80 goals have come from holdovers Jason Robertson and Linus Nyman as well.

Meanwhile, the Battalion may have flown under the radar for part of the season, but Justin Brazeau and Luke Burghardt are just two players who have stepped up this year, each scoring over 70 points.
Prediction: Frontenacs in six

(4) Niagara IceDogs VS (5) Oshawa Generals
This could very well be a look ahead to next year’s Eastern Conference final as both teams are rich in terms of elite talent from the 1999 and 2000 age groups.

Sam Miletic, acquired by Niagara in a mid-season deal with London, has been electric this year and could be in the playoffs as well.

Jack Studnicka will be counted on to lead the Generals while four players in this series (Akil Thomas from Niagara and Allan McShane, Serron Noel and Nico Gross from Oshawa) played in this year’s CHL/NHL Top Prospects Game.
Prediction: IceDogs in six