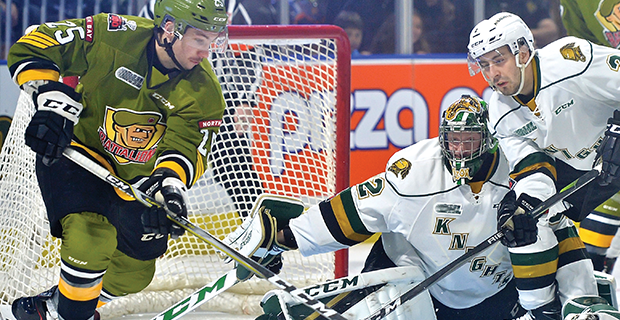 Luke Burghardt and the North Bay Battalion are exceeding expectations with their fifth-place standing in the OHL Eastern Conference. (Terry Wilson/OHL Images)

You can’t discount anyone in the OHL, as the North Bay Battalion are showing us posttrade deadline.

When they traded arguably their two best players, Cam Dineen and Brett McKenzie, many figured they weren’t expecting to do much in the playoffs if they even qualified.

They’ve done the opposite instead. With a month to go before the playoffs begin, they’re fifth in the Eastern Conference and sit just four points back of the struggling Niagara IceDogs.

North Bay has gone 10-5 since finalizing their trade deadline strategy by shipping Dineen, one of the OHL’s top scoring defencemen, to the Sarnia Sting on Jan. 6. That 10-5 run began with a five-game winning streak right off the bat.

While you won’t find any stars on the Battalion, Justin Brazeau and Luke Burghardt have been consistently strong all year and are North Bay’s leading scorers with 59 and 58 points respectively.

Lately, the Battalion have gotten a lot of production out of Matthew Struthers, acquired along with two draft picks on Jan. 3 when McKenzie was traded to the Owen Sound Attack.

Struthers put up respectable, but not overwhelming numbers with the Attack but is two points shy of the point-per-game mark in a Battalion jersey.

Coach/general manager may have gotten the best of both worlds with his trades. The deal for Dineen brought in seven early draft picks – five of which are guaranteed between 2019 and 2022 – and young defenceman Braden Henderson.

Meanwhile, we’d all be mistaken to think that the Battalion are an easy out come playoff time.

As the playoffs draw near, here’s how the various divisions are shaping up.

Central Division
The Barrie Colts continue to hold down first place in the Central and second in the Eastern Conference.

Since returning from the World Juniors, Andrei Svechnikov, the OHL’s top NHL Draft prospect, has been red hot with 27 points in 16 games. He has been held pointless only once in that span.

Aaron Luchuk is only three points behind OHL leading scorer Morgan Frost and Dmitry Sokolov has 14 goals in as many games since he joined the Colts at the trade deadline.

The Colts and IceDogs were jostling for the division lead in January, but Niagara has fallen off track with seven straight losses.

North Bay has been strong while no one knows what to expect out of the Mississauga Steelheads. Last year’s Eastern Conference champions went 8-2 through January, but lost three of their first four games to start February and remain in eighth place in the conference.

The Sudbury Wolves are dead last in the league and could end up drafting first overall in April if they don’t improve.

East Division
The Hamilton Bulldogs have a wide margin atop the Eastern Conference thanks to their aggressive approach towards the trade deadline.

Top acquisition Robert Thomas has only played nine games in Hamilton, missing some time due to a five-game suspension, so perhaps we’ve only seen him scratch the surface of what he can do.

The Kingston Frontenacs were just as aggressive when picking up talent at the trade deadline and they’re maintaining the number three spot in the conference.

After missing half the season due to injury, Gabriel Vilardi has excelled in his new surroundings, recording two points per game with the Fronts.

Further down the East, the Oshawa Generals and Ottawa 67’s are neck and neck, with Oshawa having a single-point advantage for sixth in the conference while the Peterborough Petes are outside the playoff picture and lost a lot of ground with a 10-game losing streak between Jan. 14 and Feb. 8.

West Division
The Sault Ste. Marie Greyhounds and Sarnia Sting have been the juggernauts of the OHL all season.

The Soo’s 23-game winning streak earlier this year has given them a comfortable lead atop the standings and it’s a forgone conclusion that Sarnia will have the No. 3 playoff seed in the Western Conference.

OHL top scorer Morgan Frost continues to lead the Hounds and is accompanied by a star-studded supporting cast that includes Boris Katchouk and Taylor Raddysh.

Sarnia’s Jordan Kyrou is only three points behind Frost and trade deadline pickups Jonathan Ang, Cam Dineen and Michael Pezzetta have made the Sting even more formidable.

The Saginaw Sting and Windsor Spitfires have fallen a bit off track and sit sixth and eighth in the conference respectively while the Flint Firebirds are last in the conference and 17 points back of a playoff spot as of Feb. 13.

Midwest Division
Another big time buyer at the trade deadline, the Kitchener Rangers are atop the Midwest and will likely stay there.

It took a few weeks for Logan Brown to make his Rangers debut as he was sidelined by injury, but he has taken off with 14 points (including five multi-point efforts) in his first six games.

The London Knights are second in the division and fourth in the conference despite selling key players Cliff Pu, Max Jones and Robert Thomas.

Defenceman Evan Bouchard has skyrocketed up the NHL Draft ranks because of his magnificence on London’s blue line.

The Guelph Storm and Owen Sound Attack are fifth and seventh in the west. Both of them are within striking distance of the Knights.

Finally, the Erie Otters are ninth in the conference and sit well back of a playoff spot, trailing the Spitfires by 13 points as of Feb. 13.