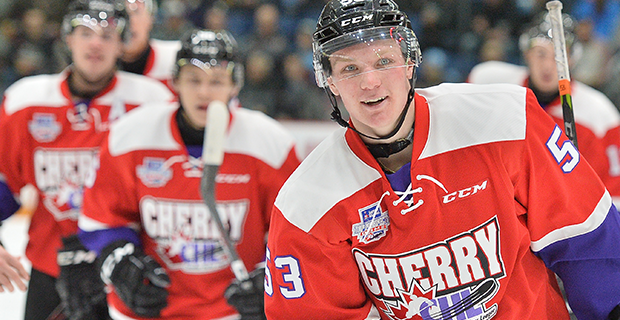 Ty Dellandrea needed only 20 seconds to seal his place in the record books at the CHL/NHL Top Prospects Game Thursday night in Guelph.

Dellandrea contributed on another record as well. He and Aidan Dudas combined for three goals in 1:07 to establish the new mark for fastest three goals scored in the game’s history.

Playing in the game was particularly special for Dudas, who was a late addition to the game due to an injury sustained by Ottawa 67’s forward Kody Clark.

That addition, coupled with being one of the smallest players competing, gave Dudas some fuel to add to his fire.

“(For) smaller guys, it’s obviously more tricky, but you can’t make excuses out here,” said Dudas, who has 44 points (20 goals and 24 assists) in as many games with the Attack this season.

“I just try to go out there and be tenacious and hard on pucks. Good things happened tonight.”

During the game, Dudas was trending on Twitter in Canada, quite possibly because of the highlight reel goal he scored in the third where he started a give-and-go with Soo Greyhounds defenceman Rasmus Sandin, toe dragged past a defender and snapped a wrist shot in for Team Cherry’s sixth goal of the game.

Hearing he was trending gave him a good laugh.

“I didn’t know that, that’s pretty cool,” he said.

Bouchard was named Team Cherry’s player of the game after tying a Prospects Game record with four assists.

Team Orr player of the game honours went to Ottawa 67’s defender Kevin Bahl, who finished with a goal and an assist.

Egor Sokolov from the Cape Breton Screaming Eagles added a goal and an assist for Team Cherry, which boasted 13 players who recorded at least a point.