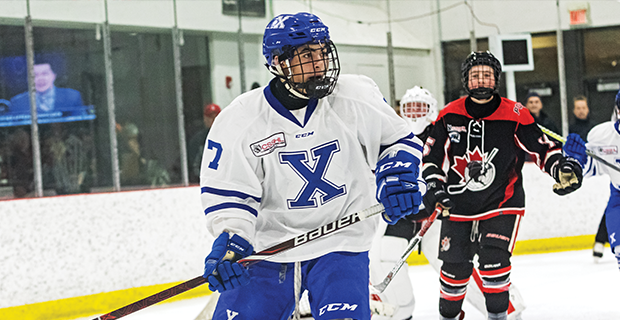 Matt Savoie is being compared to Sam Steel and Tyson Jost, who were both noticed at a young age and selected early in the WHL and NHL drafts. ( Two Point Photography & Design)

Four years from now, the hockey world will be heavily scrutinizing over the 2022 NHL Entry Draft. Matthew Savoie from St. Albert, Alta. could very well be in play for No. 1 considering his current skill at the young age of 14.

There’s no question it’s early to make any kind of prediction for someone so young, but those who know Savoie know it’s only natural to consider the future for a player like him.

Tyrel Spitzer, Savoie’s head coach at the Northern Alberta Xtreme Hockey Academy (NAX), said Savoie is one of the most skilled players he has seen at this level.

“I think compared to his peer group, there’s a pretty big gap between him and the rest in terms of speed and strength, and compete. Matt is relentless. He’s an ultra-competitor,” Spitzer said.

Brennen York, a Western Canada scout and the creator of DraftGeek.ca, echoed those sentiments.

“If he was eligible to go in this year’s draft, he would probably be the first overall pick. I know compared to the ’03s, there aren’t a lot of guys who can really keep him contained. He’s ahead of anyone in his age group,” York said.

Starting in the Alberta Major Bantam Hockey League (AMBHL) as a 12-year-old last season, Savoie tore it up for the St. Albert Sabres, scoring 61 points in 35 games en route to winning the league’s rookie of the year. At press time, he had already surpassed that total and was sitting on an incredible 64 points in only 21 games played.

He watched the three players ahead of him get drafted into the WHL last spring. One of the players included his older brother Carter, chosen in the ninth round by Regina. The younger Savoie said the two are very close.

Savoie said he can wait for his WHL draft year in 2019 and is enjoying playing while watching the process play out.

“I’m pretty patient and don’t want to rush things. It’s not that big of a deal for me. I’m happy to see my teammates go early in the draft.”

This season, Savoie joined NAX, a premier academy in Edmonton. On the Bantam Prep team, he is second in league scoring despite being one of a few 2004-born skaters.

FULL POTENTIAL
Projecting a player for stardom is tough enough when they are first drafted into the NHL, let alone when they are 14 years old.

“I don’t think I’ve seen this before at this age,” Savoie’s coach, Spitzer, said. “I’ve seen those personality traits before in a guy I coached, Sam Steel. Sam was a guy who, it didn’t matter what the drill was, he did it as fast or as hard as he could, and Matt has that exact same work ethic and approach. I see how Sam progressed, and I see how guys like Tyson Jost progressed, and now I’m seeing a guy who looks better than maybe those guys did at the same age.”

Tyler Benson is one player to look at. He had two huge years prior to the WHL Draft, including a record breaking year in Bantam AAA.

However, despite his No. 1 draft status into the WHL, Benson couldn’t replicate and hasn’t dominated in his three years in the league. He was a second round pick of Edmonton in the NHL, but not a can’t-miss prospect like many had assumed.

What Savoie did two years out from the WHL draft seems unmatched.

ONLINE ATTENTION
Several scouts rank Savoie as the top 2004 skater going into the 2019 WHL Bantam Draft. On eliteprospects.com, Savoie is one of just three players designated as a prospect for the 2022 NHL Draft.

Last January, Savoie was the subject of a Global News feature, just a few days after his 13th birthday, (which happens to be on New Year’s Day) on how he was already drawing attention from scouts.

But Spitzer said the youngster is very humble, considering the hype surrounding him.

“You would never know there’s a lot of things going on in Matt Savoie’s world. It’s almost like he doesn’t even notice it, he’s so focused.” Spitzer said.

NEXT YEAR
Interviewed the morning the before the John Reid Memorial Tournament, one of the best Bantam tournaments for Western Canada, Savoie said he was hoping to win the championship. He did just that, scoring the tying and winning goals in the final 10 minutes, while winning the tournament’s top forward honour.

“I haven’t really put much thought into it yet, there’s still lots of time. I’m not sure which way I’m planning on going, wherever the best hockey is,” Savoie said.

From a scout’s perspective, York said he expects the discussion surrounding Savoie at next year’s draft could raise talks about exceptional status for the WHL.

“I think there’s nothing holding Savoie back playing at 15,” York said. “I think if he’s able to play Midget Prep, puts up a decent amount of points and keeps developing, at this point I think he’ll be the first one out west to get it.”

Along with his talent comes a determination and strong attitude, something his head coach was sure to mention.

“He’s a guy who, in practice or workouts, he’s always encouraging his teammates. Whatever team is lucky enough to get this player in the future, they’re not just getting a great hockey player, they’re getting a great person and great teammate,” Spitzer concluded.