Max Gerlach Bounces Back in Off-Season 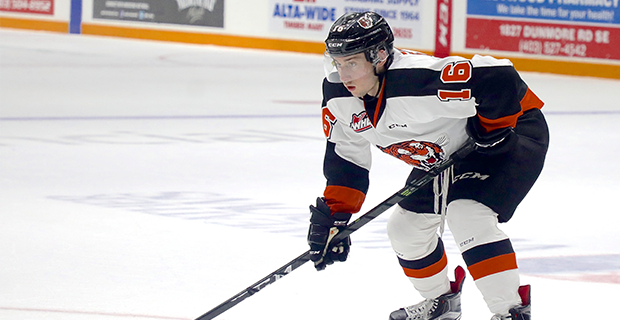 Max Gerlach shakes off two undrafted years and proves his worth in off-season. (Randy Feere)

Going overlooked at the NHL entry draft can come as devastating news, but Max Gerlach didn’t let it knock him off stride.

The 19-year-old Medicine Hat Tigers winger did not hear his name called at the draft for a second straight year, but he went on to spend his off-season like a top prospect all the same.

It only took a few hours for the Arizona Coyotes to come knocking with an invitation to their prospects camp. The news followed up an earlier offer to compete with Team USA at the IIHF World Junior Summer Showcase — and Gerlach made his presence known at both.

“Going to the Arizona camp and getting a lot of great feedback from them and finding out before the draft that I was going [to the World Junior Summer Showcase] … It’s been a lot of fun.” said Gerlach, adding he still enjoyed the draft, which featured Tiger teammates Mason Shaw and Zach Fischer going to the Minnesota Wild and Calgary Flames, respectively. "Seeing Mason and Fish and a lot of guys get a bit of attention at the draft, it was definitely exciting for me.”

Despite being an undrafted invitee at Coyotes development camp, Gerlach proved his potential in Phoenix and earned a place at the team’s upcoming fall training camp.

“It was a good learning experience for sure,” said Gerlach. “If you take a look at some of the prospects and the guys invited to camp, it's definitely a competitive and high-end camp.”

But he didn’t stop there. Just a few weeks later the Texan sniper joined up with the red, white and blue as one of just two Western Hockey League players on Team USA at the Summer Showcase and immediately started finding the highlight reel.

Gerlach scored a team-high three goals and added an assist to finish tied for second in Team USA White scoring through the first portion of the tournament, while fellow WHLer and first-round Edmonton Oilers draft pick Kailer Yamamoto followed up with a goal and two assists through the first three games.

“He's definitely one of the elite players in our league. Everybody's heard of him, and obviously going first round this year to the Edmonton Oilers,” Gerlach said of Yamamoto. “Being in a little grouping with him and representing the WHL for the Americans is definitely something special.”

Gerlach’s progressions were evident across all areas of his game with Medicine Hat last season. The 5-foot-9, 175-pound righty finished the year with 34 goals, 28 assists, 17 power play markers and five game-winning tallies — all career bests — but the biggest year-to-year development came on the other side of the puck.

While Gerlach finished his rookie year with a team-high 30 goals and 15 assists, his minus-27 rating left significant room for improvement in the defensive department. But Gerlach quickly found his groove when paired up alongside James Hamblin and Mark Rassell to start the 2016-17 season, and when all was said and done he was sitting in the black at plus-six.

Gerlach says playing with Medicine Hat’s top penalty killing pair of Rassell and Hamblin on a regular basis made a significant impact on his defensive game, and taught him the importance of being patient without the puck.

“Obviously when you're playing with guys who are two of your top penalty killers, their defensive awareness and patience in the D-zone are going to rub off on me. I was definitely more defensively aware,” said Gerlach, adding the trio did a good deal of damage with the puck as well, finishing out the season with a combined 93 goals. “They're great offensive players too, so when we're putting up goals for our team it's going to help us out and help those stats out too."

While it’s certainly a notable improvement to his overall game, Gerlach says he knows there’s still plenty of room to grow.  Spending his summer months alongside some of the best young talent hockey has to offer, both at Coyotes development camp and at the Summer Showcase, Gerlach added he learned he will need to keep working tirelessly on the basics — his quick-release shot and his skating.

"That'll be what I need to get to the next level. They really liked my awareness on the ice and my compete level, so I think it's all great things I heard. Things I can take back into this season and hopefully keep working on that and get better at it."

Gerlach will spend the next few weeks gearing up for the impending WHL season in Medicine Hat before catching a flight to Phoenix for camp with the Coyotes.