Mason Shaw Hoping to Return to Action in WHL Postseason 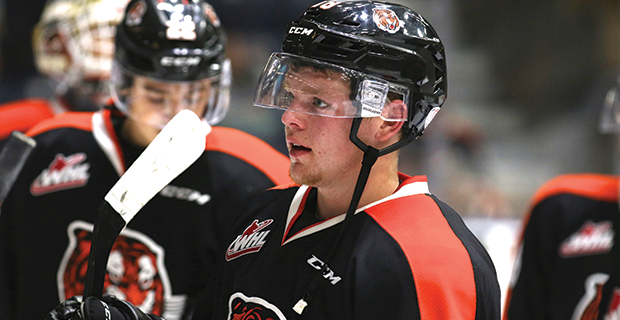 Ever since going his surgery in September, Mason Shaw has been working tirelessly to return to his previous form in the hopes of making it back onto the ice before the Tigers call it a season. (Randy Feere/Medicine Hat Tigers)

Mason Shaw learned at an early age that hard work pays off, and that lesson has led him to a chance at returning to the ice this year.

The 19-year-old Medicine Hat Tigers centre missed all 72 games of the Western Hockey League’s regular season after tearing his right ACL during a prospects game with the Minnesota Wild in September, but after a gruelling road to recovery, a return is finally within reach.

“I was raised to work hard, and I think with the way I play I have to work hard,” said Shaw, who grew up on a farm in Wainwright, Alta. “I’ve just translated that into the gym and my physio process and it’s definitely helped me out a lot.”

While his Tigers open the Eastern Conference quarterfinals against the Brandon Wheat Kings for a second consecutive postseason, Shaw will make the trip to Minnesota for re-evaluation between Games 2 and 3, and says he hopes to be back in action before the second round.

“It’s feeling really good. I’ve put in a lot of work in the gym to get it as close as it’s going to get to ‘ready to go,’” said Shaw. “I think right now I’m just enjoying team practices. I’ve felt really confident and really good, probably a little bit ahead of where I thought I would be.”

After recording 27 goals and 67 assists with the Tigers last season, Shaw made the trip to Chicago for the NHL entry and heard his name called by the Wild in the early fourth round at 97th overall.

Within a matter of weeks, Shaw was bouncing around between Wild development camp and the IIHF World Junior Summer Showcase with Team Canada. When the pre-season rolled around, Shaw reported to his first NHL training camp, but it was while trying to make an impact with his big-league club that Shaw’s season came to an abrupt halt.

Taking on the Columbus Blue Jackets at the Traverse City Prospects Tournament, Shaw went into the corner to play the puck and felt something pop in his right knee.

“The tournament got off to a pretty good start for us. Our first game we had a good game and I felt pretty good, then going into the second game I didn’t play in the first and it happened in the second period,” said Shaw. “I kind of just had an awkward play in the corner where I was cutting back and a heavier guy kind of fell on (my knee). I knew right away that something wasn’t right.”

It's been a long road to recovery for Shaw, but it's one he's travelled before. The 5-foot-9, 180-pound centre had his 16-year-old season cut short due to planned surgery on his other knee after tearing that ACL as well. This time Shaw has access to some of the best medical care available through the Wild, but the playmaking power forward still opted to receive a good deal of his rehabilitation through Prairieview Physiotherapy’s Angela Leer, who helped Shaw recover from his previous ACL tear in Wainwright.

“She’s been great. She’s been patient but she’s pushed me hard,” said Shaw, adding Leer, Tigers athletic trainer Mikki Lanuk and the Wild staff have been huge factors in his recovery. “I wouldn’t be where I am without those guys.”

Ever since going under the knife in September, Shaw has been working tirelessly to return to his previous form in the hopes of making it back onto the ice before his Tigers call it a season. While it’s come with its fair share of demands, Shaw says the most difficult aspect of the rehabilitation was mentally adjusting to an entire 72-game schedule away from the ice.

“It’s been really hard. It’s not something I’m used to doing, sitting out this long. I had a lot of highs the past summer and moving forward so it definitely felt like a setback, but mentally I’ve definitely gotten a lot stronger,” said Shaw. “There have been some darker days, but being able to be down here and getting closer to playing, it sure feels really rewarding. I’ve got to thank my parents and the people around me who have supported me because it definitely wasn’t easy sitting out a whole season.”

Shaw was cleared to resume skating in early February and returned to practiced with the Tigers a few weeks later.  While he still needs to get the green light from the Wild before he’ll be able to make his official return, making it back to the team before the end of their series against Brandon could provide a pivotal boost for the Central Division champions.  The Tigers lost top line centre James Hamblin for the entirety of the playoffs earlier this week, leaving Shaw itching to return.

“Hopefully things go well with my testing,” said Shaw, adding he feels ready to play. “I’m really happy with how it is on the ice and things are looking good.”