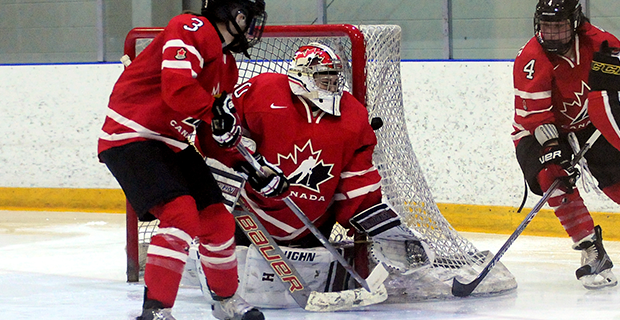 Goaltender Emerance Maschmeyer had her dream of playing at the 2018 Winter Olympics dashed but looks forward to playing with Les Canadiennes de Montreal in the CWHL this season. (Courtesy of the CWHL)

These are the three words Emerance Maschmeyer was not expecting to be focused on as September rolled around.

She was supposed to be fresh off summer bootcamp with Hockey Canada. She was supposed to be fully immersed in training with Team Canada’s centralization roster for the Pyeongchang 2018 Winter Olympics. Those three words were supposed to be road to gold. However, a gut punch came with a single phone call and a voice on the other end breaking the news she was not selected to the team.

“For me, it was an eye-opener. It put things into perspective,” said Maschmeyer, who was given an alternate position on the team, in the case one of the three goalies chosen gets injured.

On August 15th, Les Canadiennes de Montreal acquired the goalie from the Calgary Inferno in a trade that completes a deal that sent Haley Irwin to the Inferno in 2014.

“It is an opportunity to play the game I should be enjoying playing, being in the moment and not thinking too far ahead about anything else,” said Maschmeyer of her new digs. “I am excited to get on the ice this season and fall in love with the game again and remember why I started playing.”

While her dream is deferred, the friends she made while playing on previous national teams at the world championship (many who suited up with her on the Canadian Women’s Hockey League Calgary Inferno last season) would be living, breathing and eating hockey in Calgary while centralized these next five months.

“It would be tough sitting around Calgary all the time and I still want to be focused and ready for anytime I might get called to Team Canada. I want to be ready to play, but also stepping back a little bit and doing my own thing, having new experiences and a new city can be refreshing,” said Maschmeyer.

And as the saying goes, If you can’t beat ’em, join ’em. While it is obviously not wholly the main reason she jumps ship from the Inferno to the Les Canadiennes this year, there is that pesky loss still stuck in her memory last season.

While vying for back-to-back CWHL championship titles, the Inferno looked to the rookie Maschmeyer over Genevieve Lacasse to help them lift the Clarkson Cup again. Those hopes were dashed when a puck that trickled across the goal line off the stick of one of the best players in the world, Marie-Philip Poulin, won the game for the Canadiennes. A tough way to end a tough year of hockey.

“It is definitely a little weird thinking I am going to be wearing a Montreal jersey. However, they are a really good team and were a lot of fun to play against last year. I know they push each other hard,” she said. “We have a solid team and I am excited playing against some of the best goalies in the world that I have only ever faced in international play. It should be really competitive this season.”

Last year marked Maschmeyer’s first season in the CWHL. She appeared in eight games and posted a 5-3 record with two shutouts, a 1.49 goals-against average and .946 save percentage. The Bruderheim, Alberta native graduated from Harvard in 2016 after four years with the Crimson where she played a total of 99 games with a sparkling overall 1.65 goals against average.

After taking that heart-wrenching phone call from Hockey Canada, her new goalie tandem teammate Charline Labonté (Olympic gold medallist with Team Canada and 2017 CWHL goalie of the year) was one of the first people she turned to.

“She actually contacted me. That initial shock of everything it was hard to image what I was going to be doing, where I would be playing. I wasn’t in the right mind frame and when she said come join us in Montreal I didn’t know about it. After thinking on it, it just made a lot of sense for me. It will be a great experience because it is a great culture and they love hockey so much in that city. It really is just a fresh start and challenge,” said Maschmeyer. “Charlie is someone I can go to with goalie problems. We have a great friendship that started when I played at the world’s and the first time I got to be in net against the U.S.”

Maschmeyer admits it took some time to regroup from the heart-wrenching phone call from Hockey Canada, but a new mentality, season and possibilities are ahead.

“That was the toughest phone call I have ever had in my life. I have come to terms with it and have been training all summer. I expected to be in Calgary this year playing with Team Canada but sometimes life takes you on a different path. I haven’t given up on my dream and if I don’t get the call this year, I will be ready to go the years coming ahead.”

For now her path is 3,603 kilometres across the Trans-Canada Highway.

“In my little SUV with room for maybe just my hockey gear and not much else, I will be there for the beginning of September ready to go,” said Maschmeyer.