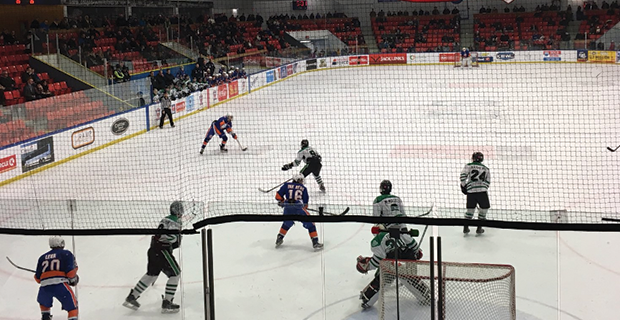 From Dec. 26 to Jan. 1, Midget AAA hockey teams from around the world come to Calgary to compete in the Mac's Midget AAA World Invitational. With 25 teams on the men's side and eight on the women's, it's an action-packed week in rinks around the city. (Courtesy of Mac's Midget AAA Tournament)

Shortly after Christmas, Calgary made headlines as being colder than the North Pole and Mars, among other places, as an arctic spell swept through the city.

The cold weather wasn’t the only visitor, as the yearly Mac’s Midget AAA World Invitational brought in teams from California, Carolina, New York, Hungary and Belarus, among other places. Even the Hungarians and Belarusians must’ve been shocked by the -20 C weather in Cowtown, as their home countries were above freezing at the tournament’s start.

Kicking off on Boxing Day in several rinks around Calgary, the Mac’s is a tradition for not only several local AAA Midget teams, but many visiting teams as well.

The men’s side has 25 teams with one local team as a host in each division: Calgary Royals, Calgary Flames, Calgary Buffaloes, Okotoks Bow Mark Oilers and Calgary Bisons.

There are just eight teams in the female tournament, highlighted by local teams Calgary Fire and Rocky Mountain Raiders.

Female Division
Each year, the Raiders continue to send out one of the tournament’s strongest teams and have once again done so this year. As of Friday morning, the defending champions are 3-0 with 17 goals for and two against and have one game remaining against Prince Albert on Saturday.

With the Raiders on clear control of their pool (Regina, Swift Current and Fraser Valley each have one win), the other group is wide open.

Prince Albert and Calgary both have a win and a tie, sitting at three points, with Delta at one win and two points. Delta and PA both have two games remaining in the round robin, while Calgary has one. The 0-3 Vancouver Island Seals are hoping for a win in their final game to end the tournament on a high note.

As one might expect, the Raiders also dominate the scoring race, having the top five scorers on their squad. Mary McDonald leads the way with eight points, and is tied for the lead in goals (three) with teammates Kara Kondrat and Breanne Trotter.

Five goalies have turned in shutouts, including Kayla Munro of Fraser Valley who stopped all 36 shots against the Calgary Fire

Male Division
Returning as defending champions, the Belarus U-17 National Team have got off to a good start a 2-1 with an average of nearly six goals per game and have one more contest before the knockout stage. Red Deer leads the pool at 2-0 with two games to play.

In Pool 1, the Calgary Royals and St. Albert Raiders are deadlocked with 2-1 records and one game remaining, although the Royals have a slight goal differential lead. Tisdale and Fraser Valley each have one win and two games left, so they could jump into the top two. The Mac’s has not been kind to the Hungarians, who started 0-2.

The hottest team in the tournament is the local Calgary Buffaloes, who are 2-0 and have 9-1 win over Swift Current and 15-1 win over Carolina. They’ll face a tougher test against the Knights of Columbus (Edmonton), also 2-0, on Saturday. Carolina is having a tough time, having allowed 35 goals in three contests.

Pool 4 is waiting for a team to breakout, as four teams sit with one win. Games have been much closer than other divisions, so it looks like the maker of the groups got this one right. The Lethbridge Hurricanes at 1-0-1 are first in their division in the Alberta Midget AAA Hockey League and could claim this Pool with a strong final two games.

Similar to Pool 4, as of Friday morning it was unclear who would win Pool 5. Again, four teams have one win, and the 0-2 Ontario Jr. Reign out of California haven’t looked out of place. The Valley West Hawks, with one win and two ties, have a one point advantage, but the Calgary Northstars and Regina Pat Canadians have a game in hand.

With 24 goals in just two games, it comes as no shock the Buffaloes have three of the top four scorers so far. Liam Fraser has six goals and 10 points, while teammate Layne Sniher has seven assists and eight points. Cariboo’s Brennan Malgunas has three goals and seven points for third in scoring. Second in goals behind Fraser is Brett Rylance of the Knights of Columbus Pats with five goals in two games.

Braeden Stephen of Knights of Columbus has two wins and has stopped 34 of 35 shots to highlight goaltender leaders. Five other goalies have recorded shutouts.

Round robin play continues Friday and Saturday before the knockout stage comes in Sunday.

The finals will be played at the Scotiabank Saddledome, home of the Calgary Flames, on New Year’s Day, with the women playing at noon and men at 4 p.m. Check back on HockeyNow.ca for a full recap.