Krebs Stepping Up for Kootenay Ice After Trade-Heavy Preseason 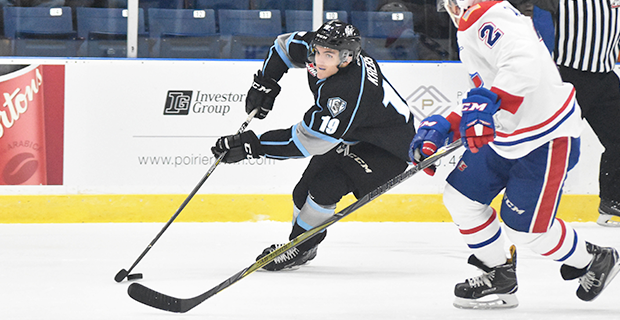 Peyton Krebs was one of the frontrunners for our 2016 Minor Hockey Player of the Year Award, and although Bowen Byram took that honour, Krebs was picked up first in the 2016 WHL Draft after earning an incredible 102 points in his final ABMHL season. (Brad McLeod)

The Kootenay Ice have seen more changes to their roster than any other team in the Western Hockey League through the first quarter of the season, but one constant continues to be rookie standout Peyton Krebs.

The 16-year-old Okotoks product is just off the pace of a point-per-game average with three goals and 10 assists through his first 16 games while helping his team to their best start to the year in recent memory despite making nine transactions since Sept. 10.

“There have been a lot of changes in the past little while here but I think it’s leading toward the future, a successful future,” said Krebs, the first overall pick in the 2016 WHL bantam draft. “Obviously we want to win right now too, so that’s part of our goal but this is a stepping stone toward where we want to be and it’s really exciting to be a part of.”

The 5-foot-11, 162-pound winger has been a consistent offensive presence on a team transformed in a complete off-season overhaul. The Ice changed their logo, uniform, staff and ownership group before entering this season with a clean slate and plans for a strong future.

Kootenay’s biggest move of the year so far came on Nov. 13 when they sent captain Cale Fleury to the Regina Pats in exchange for Jonathan Smart, Cole Muir, a second round and sixth round pick in 2018 and another conditional pick. The Ice also sent 6-foot-4, 214-pound winger Barrett Sheen to the Moose Jaw Warriors for a fifth round pick in 2018.  Fleury closed out his 218-game tenure as a member of the Ice with 26 goals and 60 assists from the Ice’s back end.

Some of Kootenay’s other notable transactions include the acquisition of 19-year-old centre Jeff de Wit from the Regina Pats in exchange for big-bodied forward Tanner Sidaway and a seventh round 2018 draft pick, and sending 18-year-old winger Jake Elmer to the Lethbridge Hurricanes along with a fifth round pick in 2018 to acquire overage centre Alex Baer.

While they’ve given up five key players since the start of September, Krebs and the team’s remaining core have been keeping the Ice afloat with a 8-12-1-0 record through mid-November.

“It’s a tough league, no doubt about it,” said Krebs. “Sometimes the bounces don’t go the way you want but you’ve just got to battle through it and work toward your next game.”

Krebs added that work requires a serious level of dedication on the playing surface, in the gym and in front of video screens, but it always seems to pay off.

“I’ve been working really hard on and off the ice to be as successful as I can,” said Krebs, who sits third in team scoring despite missing five games at the 2017 World Under-17 Hockey Challenge.

Krebs skated in six games as an affiliate with the Ice last season, logging a goal and five helpers over the span before opening his official rookie year with an assist in a 3-2 win over the Calgary Hitmen. His dynamic presence on the ice earned him a place on Team Canada Red at the World Under-17 Hockey Challenge. While his squad settled for the silver in a 6-4 championship loss to the United States, Krebs finished tied for 10th in tournament scoring with a goal and five helpers — including an assist in the gold medal game — and says nothing quite compares to playing with the Maple Leaf on his chest.

“It was pretty special in the gold medal final, having the Canadian crown behind your back. Out in Dawson Creek they put on a great show,” said Krebs. “The fans created a pretty special game. Unfortunately we couldn’t pull out the win but it was a great experience.”

Krebs earned his way to the top of the bantam draft chart and onto Hockey Canada’s radar after a near-unbelievable Alberta Major Bantam Hockey League season with the Rocky Mountain Raiders. In just 27 games, Krebs shattered the score sheets with 46 goals and 56 assists to eclipse triple digits with 102 points. It was enough to earn Krebs the AMBHL’s MVP award with the most goals, most assists and most points on the year.

Now Krebs is trying to forge his path in the WHL, and he’s been living up to his billing through the first quarter of the season. Newly acquired Ice netminder Duncan McGovern says it’s been a joy to watch Krebs work his magic in the offensive zone since joining the team in a trade with the Medicine Hat Tigers on Oct. 23 and sharing the pipes with Bailey Brkin — acquired in a trade with the Swift Current Broncos on Sept. 10. In fact, McGovern says Krebs reminds him of a triple-digit point producer from last season’s Central Division champion Tabbies.

“He can really move the puck. He sees the ice extremely well. He kind of reminds me of Chad Butcher (103 points as an overager last season) a little bit actually,” said McGovern. “He’s a pretty dangerous player.”