Knights and Steelheads Taking a Hit with Key Players in NHL 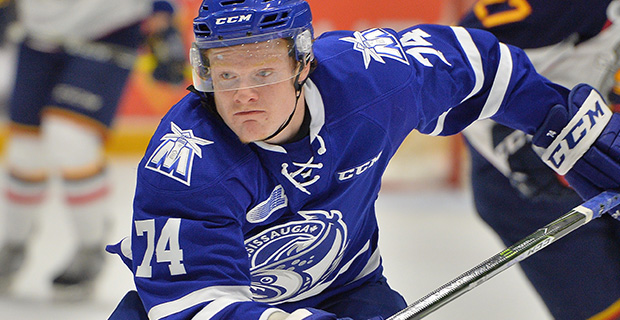 Owen Tippett started the 2017-18 season with the Florida Panthers after putting up 44 goals with the Mississauga Steelheads last season. (Terry Wilson/OHL Images)

In one sense, you could say the Mississauga Steelheads and London Knights are victims of their own success.

Major junior hockey is a development stream after all and they’ve each developed multiple players well enough for extended stays in the NHL this season, albeit they could still come back to the OHL.

Without these players intact, the Steelheads and Knights, both of whom OHL followers had high expectations, were at the bottom of the league standings by mid-October.

For the Steelheads, Michael McLeod and Owen Tippett are still with their NHL teams – McLeod with the New Jersey Devils, although he’s recovering from surgery to repair a torn meniscus, and Tippett is with the Florida Panthers and sat out the first four games as a healthy scratch before making his NHL debut on Oct. 17.

The Knights are without defenceman Victor Mete, who has earned a lot of minutes alongside Shea Weber with the Montreal Canadiens, while Alex Formenton played in one out of five games with the Ottawa Senators before he was sent back to the Knights on Oct. 15.

Mississauga and London each had one win under their belts after the fourth weekend of the season.

To be clear, missing these players hurts, but it’s not the only reason they’re doing poorly.

“If we get healthy and get guys back, we should be fine,” said Steelheads coach/general manager James Richmond. “But in the meantime, we need to get these guys here understanding the importance of playing every shift every night.”

We never know what course of action NHL coaches and general managers will take with young prospects until it plays out.

As an example, through the summer of 2016, it was highly expected that Dylan Strome would stick with the Arizona Coyotes even though he could return to the Erie Otters for his 19-year-old season.

Strome was used sparingly by the Coyotes when he started the 2016-17 season there, playing in only seven out of 17 games before he was sent back to the Otters a month before the World Juniors.

A lot of signs suggest Tippett and McLeod (when he recovers) will likely be sent back to the Steelheads for another year of development before they reach the nine-game mark, after which point a year is burned off their entry level contracts.

If that were the case, representing Canada at the World Juniors would be a likely path for them to take.

Even if his stars are in the NHL mostly to watch games from the press box and observe how professional players conduct themselves, Richmond sees value in that and believes they’ll be stronger players because of it.

“As hard as we work here, I can tell you they work 10 times as hard up there,” said Richmond, who has previously worked with the LA Kings’ player development department.

“Even the guy who works his butt off in junior has no idea (how hard NHLers work) until he gets there. I know how hard Jeff Carter works from being in LA and he’s been on Team Canada (at the Olympics).”

With each game that passes for Mete in Montreal, it appears more likely he’ll stay there this season.

It wasn’t expected as he’s a fourth-round draft pick from 2016, but he’s held his own in the NHL thus far as a promising defender who can move the puck effectively.

Sting Off to Roaring Start
Last year, the Sarnia Sting were in a similar situation as Mississauga and London are. The Sting had three players – Jakob Chychrun, Pavel Zacha and Travis Konecny – start the season in the NHL and stay there even though they had at least one more season before they were old enough to have the option of playing in the AHL.

This year, they got off to a roaring start with nine wins in their first 10 games to reach the top of the league standings.

With lots of hockey left to play this season, Sarnia fans will be watching with bated breath to see if the Sting can finally stick around for a while in the playoffs.

They haven’t made it past the first round since 2008, despite having a promising season in 2015-16 when they won the West Division regular season title.

They could face stiff competition in their division this year. The Sault Ste. Marie Greyhounds got off to a very strong start as well while the reigning Memorial Cup champions aren’t too far behind.

Svechnikov Living Up to Early Season Hype
Andrei Svechnikov has been billed as advertised.

He came to the Barrie Colts as the first overall pick in the 2017 CHL Import and he’s considered by many to be the number two prospect for the 2018 NHL Draft.

Svechnikov has wasted no time getting accustomed to the OHL. He managed to put up 10 goals within his first 10 games and has dominated games with both his skill and size.

Because of his efforts – and high production from Alexei Lipanov and Lucas Chiodo too – the Colts won seven of their first 10 games.

Nipping at their heels (or in this case hooves?) are the Niagara IceDogs, who have a high-end NHL draft prospect of their own in dynamic forward Akil Thomas.