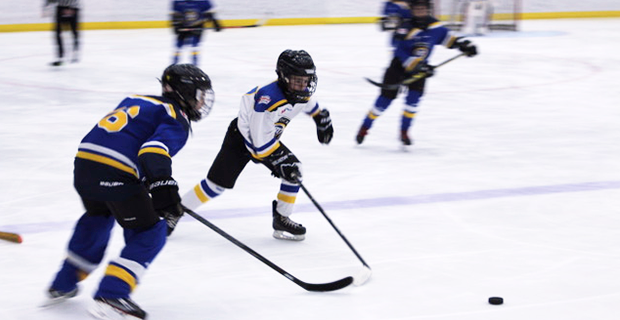 Cade Davis of the Southwest Atom team chases down the puck at the 2017 BT Hockey Classic. (Steve Seto/HockeyNow)

The second last day of the eighth annual Breakfast Television (BT) Hockey Classic was filled with iconic Canadian heroes on Thursday. Former Team Canada captain Cassie Campbell-Pascall and Hockey Hall of Fame inductee Danielle Goyette were in Calgary to share the excitement of atom players as two games were featured live on City.

Each player was introduced before the game, and they embraced their NHL moment by rushing out onto the ice after hearing their name over the PA system – complete with a boisterous crowd to cheer them on.

And on top of the fun and excitement, Goyette she’s happy just to see one more opportunity out in the world for kids to play the game.

“When I look at that today, kids have so many opportunities and they just need a chance to be part of it. We try to make it more accessible for kids, for me I always say sport is the best school of life. You learn so much going through that,” said Goyette, who won two Olympic gold medals and eight world championships with Team Canada.

“When you have a chance to be on TV, it’s pretty special. I’m sure that some of these kids had problems getting to sleep last night because they knew they’d be on TV today.”

But sleep or not, everyone showed up bright and early and ready to hit the ice.

“You can see the kids, as tired as we are to be here at five in the morning, arrive so fresh ready to go. Just excited to be on TV and going on the ice, it really rejuvenates us,” City producer Ian Busby said.

The kids are of course thrilled to play at WinSport and have their moment of fame, but Busby said that for the City crew and Hockey Calgary, the event has an even greater payoff for all involved.

“It really connects us with the community. It was a way to have something great for the kids and gives us a chance to be out amongst our viewership and really give the kids a platform,” Busby said. “We see the dedication the parents have to their kids in playing hockey because to drag their whole family out of bed and a lot of times we bring siblings on and talk to them about watching brothers or sisters play.”

The tournament’s focus is to help reconnect kids with their love of the game, without worrying about where they are in the standings. And of course, even though we’re all told hockey and so many other sports should be all about fun, it’s easy to lose sight of that after the buzzer or whistle blows.

As Campbell-Pascall explained at Thursday’s BT Hockey Classic games: “Hockey is generally a sport about winning and losing, but I think if you’re not having fun at all you don’t have a chance to be good at it.

That sentiment was seen across the ice the entire morning, especially in the second game between Simons Valley and the Saints Hockey Club as they left it all out on the ice in a 5-4 nailbiter.

And games just like that are the ones that teach you to push your boundaries and tap into some of the best parts of playing on a team.

The BT Hockey Classic couldn’t accept any more teams as they quickly reached the 52 maximum. The tournament wraps up on Friday with the championship games also being featured on City’s Breakfast Television. Stay tuned for more coverage from HockeyNow.