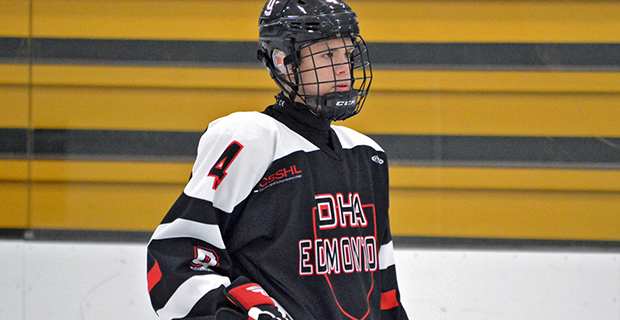 One of the big benefits of living in a Canadian city that's located a stone's throw from the American border?

The option of checking in with U.S. sports radio while you're driving your little tykes to the rink. In Toronto, we're fortunate to be able to tune into WGR Sports Radio from Buffalo. The last few years have been rough on Buffalo Sabres fans, but they're definitely pumped about an exciting, young defenceman who could explode on the scene next season. Brendan Guhle is a Western Hockey League all-star who got into a handful of playoff games last spring with the Sabres AHL affiliate, the Rochester Americans. Guhle is a smooth-skating blueliner with a ton of skill and the various hosts on WGR are frothing at the mouth to see what kind of impact he can have at the NHL level.

Meanwhile, back in Brendan's hometown of Sherwood Park, Alberta, there's another Guhle d-man who has an entire province excited about his potential. Meet 15-year-old Kaiden Guhle, five years younger than his big bro, and this year's winner of the HockeyNow Minor Hockey Player of the Year Award for Alberta. Guhle is coming off a sensational season with the Okanagan Hockey Academy Edmonton Bantam Prep program, racking up 17 goals and 23 assists for a total of 40 points in just 30 games. Guhle parlayed those solid scoring stats into his selection as the top defenceman in the Canadian Sport School Hockey League and was also picked first overall by the Prince Albert Raiders in this year's Western Hockey League draft.

That was the Twitter message from big brother Brendan last May after learning that Kaiden would be getting the chance to follow in his
Prince Albert footsteps. The Raiders, you see, selected Brendan with the third overall pick in the 2012 WHL draft and Kaiden is looking forward to his own opportunity to slap on the green and gold.

"There's so much great hockey history in Prince Albert," said an excited Guhle. "It's a great rink with the fans right on top of you and I loved going there to see Brendan play."

Over the years, Kaiden and Brendan's mother, Carrianne, logged huge miles going back and forth from Sherwood Park to Prince Albert. She's obviously proud about the hockey ability of her two boys, but she's even prouder of the two siblings’ tight relationship.

"They're very close," said Carrianne. "It might be hard to believe, and maybe it's because of their age difference, but Kaiden and Brendan have never had a single fight. They're both really proud of each other's accomplishments and very supportive of one another."

Even though Kaiden is a lot younger than Brendan, he's starting to catch up to him physically, as he continues to add weight to his 6'1" frame.

"Kaiden has more of an edge to his game than Brendan does," assessed Carrianne. "Kaiden obviously has a lot of skill, but there's also a lot of grit in his game and he's not afraid to bang and crash when he gets the opportunity." 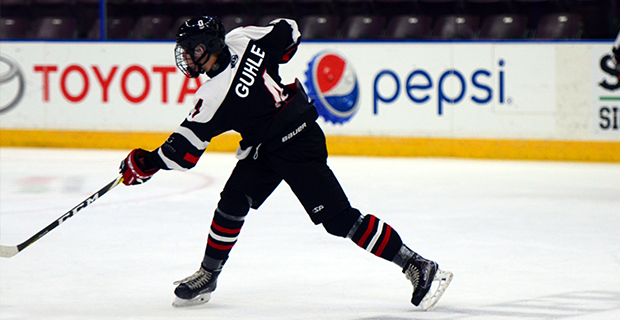 Brent Parker, a Western Hockey League Scout for ISS (International Scouting Services) weighed in with his thoughts on Kaiden's arsenal.

"He's a rangy, smooth-skating defenceman who plays a mature game and has a tremendous on-ice presence. The game goes through Kaiden when he's on the ice and he wants the puck when the game is in the balance. He leads on and off the ice by doing things the right way and has the respect of his teammates".

"You don't have to be much of a hockey expert to watch him play and realize how talented his is," said Beissel.

"Kaiden does everything well. He's the toughest kid on the ice, he can shut down the other team's best player and still put up a ton of points himself."

Obviously, Kaiden's on-ice performance will go a long way in determining his hockey future, as the talented young rearguard gets set to continue honing his skills next season with the OHA Edmonton Midget prep squad. However, Beissel believes Guhle's leadership ability also separates him from the pack.

"Kaiden was our team captain and he handled his duties with tremendous maturity. We carried a player on our roster this year who wasn't quite ready to compete at the Bantam Prep level. But he practiced with us every day and Kaiden went out of his way to make him feel welcome and a true part of the team. The other kids took their cue from that because when your best player is also your best person, it goes a long way."

So, what's the secret to Guhle's leadership style?

"It's pretty simple," assessed Kaiden. "I try to lead by example and never put myself in front of the team. If you say one thing and do another, there's a pretty good chance than none of your teammates are going to buy in."

Carrianne, meanwhile, believes that her son's humble and down-to-earth nature will help Kaiden fulfill his dreams, on and off the ice.

"I'm proud to tell people that Kaiden won the Royal Glenora Award this year," said Carrianne. "The Royal Glen Club is where the boys do most of their hockey training. The coaches and trainers keep an eye out for the kids who are being respectful to people around the club, and I was very happy to see them select Kaiden for an award that recognizes a lot of the positive qualities that go beyond just being a hockey player."

So, a proud mother of two hockey-playing sons – one on the verge of doing some big things in Buffalo and the other this year's recipient of the Alberta HockeyNow Player of the Year.

And the hockey world is pretty lucky to have the chance to watch a couple of Guhle boys strut their stuff.