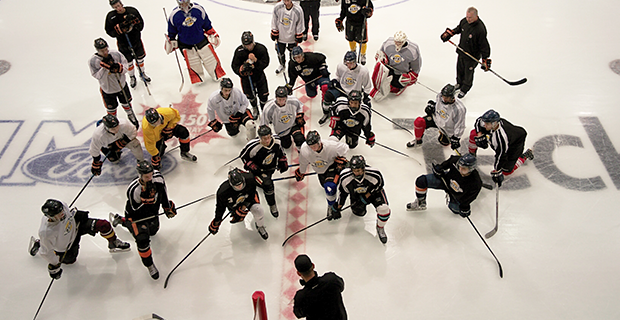 With Junior A seasons finishing or winding down, coaching and scouting efforts go into overdrive as teams look to build for next year at spring camps.

Hockey in April is an interesting time. At the younger ranks, seasons are over or winding down and kids may venture into other sports or spring/summer hockey.

At the junior level, championships will be decided this this month, while in most professional ranks, the postseason begins.

An often overlooked, yet very important aspect of the spring is the camps that Junior teams run as they look to build their teams for next year.

Jessie Leung, an assistant coach for the Trail Smoke Eaters of the BCHL, broke down the relevance of spring camps.

“I think they are very important in two regards. One, to see some players you didn’t know about or perhaps some players that have come to you for potentially opportunities with your team that you didn’t know much about. What you find in Junior A, in terms of scouting much of it is done by the coaches,” Leung said.

“The other regard is it’s good to get players you’ve made commitments to into your camp to see them compete.”

The Trail Smoke Eaters, located in the Interior of B.C., not only have their main spring camp at home in Trail, but then go to Greater Vancouver later on. They also extend their search, holding both development camps and identification (ID) camps in Whitehorse, YK to find untapped talent.

Trail is not an easy place to get to, especially if players need flights to get to camps. Leung says other locations are important.

“Being in Vancouver makes it easier for kids to get here from across Canada, versus getting to Trail,” he said. “It creates that opportunity where you bring the camp closer to players you want to see. It’s not just about players in that major district, but we’re also hoping to get players from Vancouver Island, maybe from east if they’re flying in.”

“With the camp they were looking to do in Whitehorse, part of it was that Identification Camp for players looking to make the jump to juniors.

Having a camp in Whitehorse brings in the players in the Yukon, but also makes it an easier commit from players coming from Yellowknife or even Alaska.”

Leung says with the number of players and so few scouts, it’s easy to go overlooked.

“There’s players you might unfortunately miss. Our spring camps, the BCHL Exposure Camp, these are opportunities for players we may have missed to go to a place they know we’ll be there and so we know we’ll be able to see them, wherever they’re from,”

Dates differ from team to team, with some starting late March and other early May. Spring camps are a main identifying tool for teams looking to secure commitments for the next season, plus find players to invite to the main camp at the start of the season.

Sometimes, camps can fall during the playoff run, which is obviously tough for coaches to get away and assess talent, but it also can work as a big recruiting tool. Think about being a sought after player considering joining a team and getting to watch a town go crazy for local playoff hockey.

The camps can be in the city the team calls home, but often at other locations to attract different talent. For example, the Wenatchee Wild who are the lone team from Washington in the BCHL, had two April Camps: Anaheim, CA, and Superior, CO.

For the second year in BCHL, the league is hosting a camp geared towards high-end, young players. Open for those born in 2003 and 2004 this summer, the camp brings rep players from high performance programs to play in front of representatives from all teams. Last year’s inaugural camp resulted in 13 players jumping to the BCHL, according the the website.

In the AJHL, Fort McMurray holds two camps, one in Cochrane and one in Edmonton.

Tom Keca, the head coach and GM of the Oil Barons, said being so far north in Alberta requires some creative thinking so see players.

“For us when we started out we had one camp, but about three years ago we felt the need that we wanted to address geography so we have an Edmonton camp and one in Calgary as well,” he said.

The Oil Barons spring camp mentality may be different than other teams, focusing more on building a name amongst young players.

“Our targeted mandate has been that spring camp is almost for younger kids which gives us an opportunity to showcase the coaching staff or the organization and how we run things,” Keca said. “When these players do develop and they’re either playing AAA or prep hockey, they’ll remember ‘I went to Fort McMurray’s camp and I was impressed with the way they did things’”.

There are lots of Junior A options for hockey players, and Keca is well aware of that.

“For us nowadays, you understand that you have to stay relevant with a lot of kids. You’re constantly on the phone or your travelling around to meet, whether it’s players or parents, and trying to sell your organization and show why Fort McMurray would be a great destination. We’re now focusing not only on Alberta kids primarily where we draw our roster from but we’re looking to B.C., the east coast, down in the States as well,” Keca said.

Scouting and recruiting never ends for the coaches and scouts of Junior A teams. While they have more time in the offseason with no practices or game planning, their time and focus shifts to finding the next impact player for the squad.

Spring camps are just a small part of it.