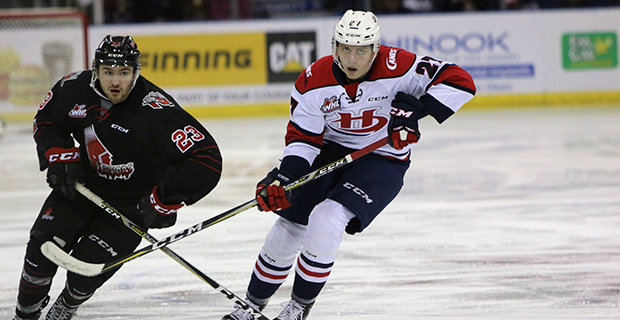 Seventeen-year-old Logan Barlage was drafted fourth overall in the 2016 WHL Bantam Draft by Swift Current, where he made his official WHL debut this season before being traded to Lethbridge this past January. (Cindy Adachi/Lethbridge Hurricanes)

Logan Barlage is making the most of his minutes.

The 17-year-old Lethbridge Hurricanes centre has been thriving since getting shipped away from the Swift Current Broncos at the trade deadline and now has the chance to snuff out his former squad in the Western Hockey League’s Eastern Conference final.

“You’ve just got to treat it like any other series or any other game,” said Barlage, who recorded four goals and three assists through the first two rounds of the playoffs. “You can’t think about it too much or it’ll get into your head. We’re just going to try to keep playing the way we are.

We’ve been playing really good lately so that’s the plan.”

Barlage —a product of Humboldt, Sask. — had his world turned upside down when a bus carrying the Saskatchewan Junior Hockey League’s Humboldt Broncos was struck by a semi-trailer north of Tisdale on April 6, killing 16 and severely injuring 13 more.

It was a waking nightmare for Barlage and the rest of Humboldt, but he says it’s been truly inspiring to see the hockey community come together in support of the Broncos over the past few weeks. A GoFundMe page raised more than $15 million for the survivors and families of those affected over a 12-day span, while many high profile hockey names like Connor McDavid have made a trip to visit some of the surviving players in hospital.

“It’s been tough for the community and for me also, but there’s been a ton of support. It’s been awesome,” said Barlage. “A lot of people are pretty happy with how it’s going. Lots of cool visitors are coming to Humboldt, the sport has just been unbelievable and we couldn’t be more thankful for that.”

Barlage spent his formative years playing in Humboldt’s minor hockey system and says the Broncos are an integral part of the community’s history and culture. Barlage put himself on the national hockey map while playing with his hometown’s peewee AA squad, and says all young players in Humboldt dream of wearing Broncos green.

“It’s huge there. They nourish the love of the game for most young players,” he said. “For me especially, I went to a lot of games as a young guy and I always wanted to be a Bronco. They’re big role models in our community and they’re going to continue to be. It’s just such a great organization.”

At the ripe age of 13, Barlage racked up an astonishing 175 goals and 99 assists in just 56 peewee contests. The big-bodied centre went on to produce two points per game in his rookie bantam season, then doubled that production the following year. After racking up 60 goals and 65 helpers for 125 points in just 30 bantam AA games, Barlage heard his name called by Swift Current at fourth overall in the 2016 WHL bantam draft.

While Barlage earned a full-time spot on Swift Current’s roster to start his 16-year-old season this year, the Broncos opted to part ways with the 6-foot-4, 201-pound lefty in order to load up for the playoffs. Barlage made his way to Lethbridge, along with Logan Flodell, Owen Blocker, Matthew Stanley and three draft picks, while Giorgio Estephan, Stuart Skinner and Tanner Nagel went back the other way.

Despite moving away from one of the most high-powered WHL teams in recent memory, Barlage says he immediately felt at home in Lethbridge.

“I was pretty excited when I got traded. The opportunities are unbelievable here and I’ve been so happy this happened and how it worked it,” said Barlage. “It’s just been really good for me, I love being a Hurricane.”

After recording a goal and six assists in 38 games with the Broncos through the first half of the season, Barlage made the most of his added ice time in Lethbridge and flipped his figures to six goals and seven assists through the last 33 games of the year.

Barlage has put the pedal to the floor since the puck dropped on the postseason as well. Playing on a line with Zane Franklin and Egor Zudilov, Barlage has upped his production to nearly a point per game with four goals and three assists during Lethbridge’s back-to-back five-game series victories over the Red Deer Rebels and Brandon Wheat Kings.  His line has combined for 14 points in the 10-game span.

“I think we just have some good chemistry. It took us a little bit but we’ve really found our way as a line. We’ve been passing the puck well and getting open for each other, we work on things in practice and stuff like that, it’s all been helping us,” said Barlage, adding he hopes to continue the upward trend in the Eastern Conference final.  “I think we’re all pretty excited to get up and it’s going to be an exciting crowd back home and in Swift Current.”